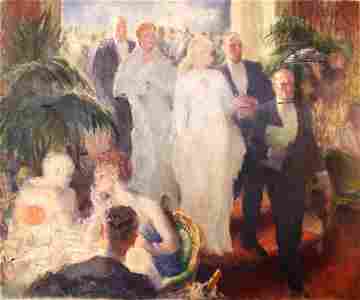 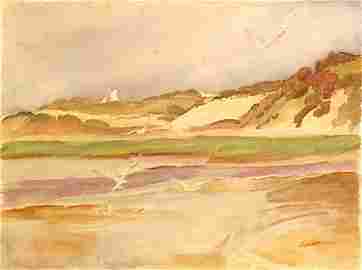 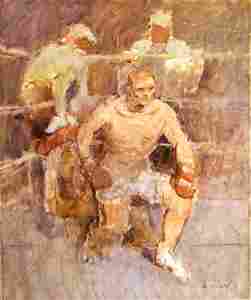 Important Auction of Paintings, Drawings, and Illustrations from
the Estate of the Studio of Edmund Franklin Ward (1892-1991)

A painting and fine arts auction with a featured collection of the paintings of Edmund F. Ward (1892-1991), sold by the request of heir. This auction will occur live on the internet at the same time as the auction at it's physical location in Essex Massachusetts. Over 250 oils, drawings, and watercolors from the artist's studio in White Plains, NY. Subject matter of these diverse works by this talented artist include many wonderful representations of landscapes, seascapes and ocean views in many beautiful New England locales such as Monhegan Maine, and Waldoboro, Maine; sporting scenes, boxers, golf, children at play, studies after Manet, Renior, Delacroix, and Cezanne, florals, Ballet and Ballerinas, theatre scenes, mythological and religous subjects, and portraits.

This collection of artwork by Edmund Franklin Ward had recently come to the attention of Bert Rosengarten of Antiques on Cambridge Street, Cambridge, MA. This large selection of works has been stored for many decades in the Boston home of his granddaughter.

Edmund Franklin Ward was born in White Plains, New York where he worked as a professional illustrator for most of his life. During 1910-1912, he studied at the Art Student League alongside Norman Rockwell with whom he shared a studio (West 55th St., NYC, 1911-1912). In 1910, Ward won the Saltus Prize for the best drawing in all the antique classes at the Art Student League. His teachers included George Bridgman, Edmund Dufner, Thomas Fogarty, Wayman Adams, and Harvey Dunn. By the age of twenty, Ward was already a successful illustrator, and his works were found in the Saturday Evening Post. In his early twenties, he worked at the J. Walter Thompson Advertising Agency. During World War I, Ward created ads for the U.S. Army. He established a studio at 121 East St., NYC. He illustrated the books "Thundering Herd," by Zane Grey and "Hawkeye" by Emerson Haugh. Ward’s illustrations were published in Red Book, Woman’s Home Companion, Ladies Home Journal, McCall’s and Pictorial Review. During the 1940’s, Ward illustrated many print advertisements in magazines such as Colliers, and he created World War II posters for the U.S. government.

Between 1924-1925, Ward taught at the Art Student League. As part of the WPA Project, he created a mural for the White Plains Federal Building. He was also the artist for the U.S. postage stamp commemorating the Battle of White Plains. His works have been exhibited in the National Academy of Art, the Guild of Freelance Artists, the Art Institute of Chicago (1925 prize), the Society of Illustration, the Guild of Freelance Artists, and the Salmagundi Club.

In 1971, Ward’s painting "Enter the Law" was included in the publication "The Art of the Old West: The Collection of the Gilcrease Institute by Rossi and Hunt (page 250), which firmly established him among the greats of Western illustrative art.

About Bert:
Bert Rosengarten of Antiques on Cambridge St., Cambridge, MA is a longtime Art and Antiques Dealer and Auctioneer. (Massachusetts Auctioneer License #2628)

Bert Rosengarten Antiques is a full-services antique business. His interest and passion for antiques goes back to 1965 when he began helping his parents in their business, Malvina's Antiques. In the 1960's and 1970's, Erich and Malvina Rosengarten were most active as shop owners and show dealers and developed a specialization in American and European bronzes and fine decorative arts. Over the past thirty-eight years, Bert has expanded his areas of expertise as a show dealer, shop owner, auctioneer, and appraiser. 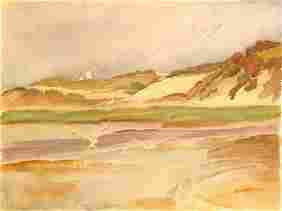 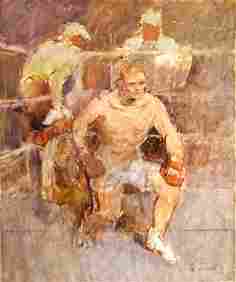 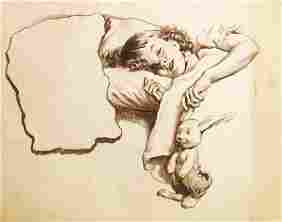 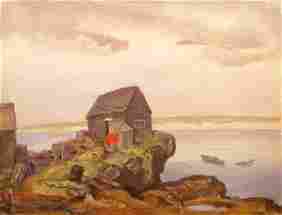 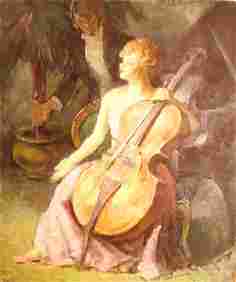 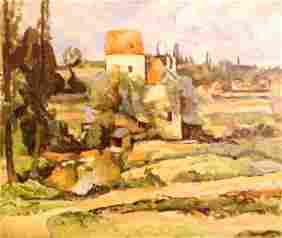 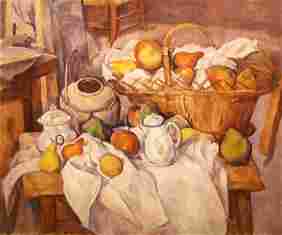 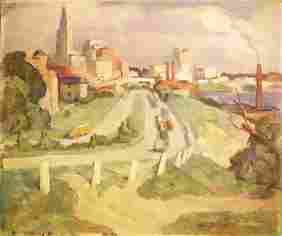 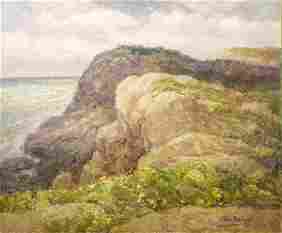 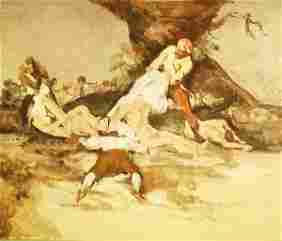 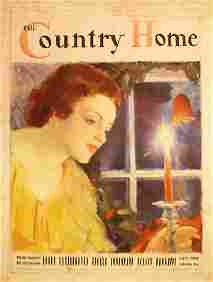 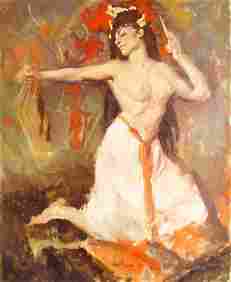 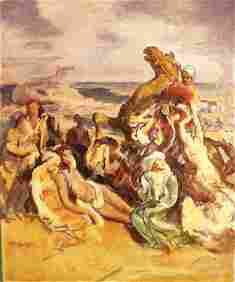 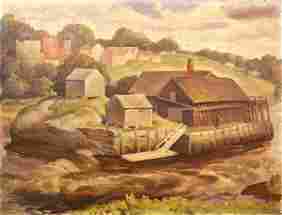 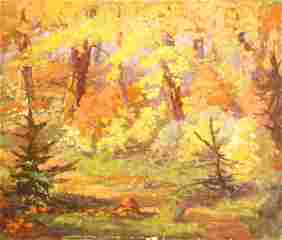 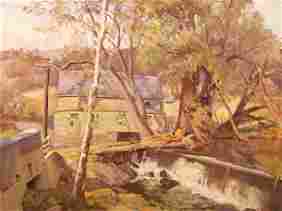 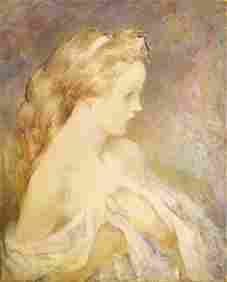 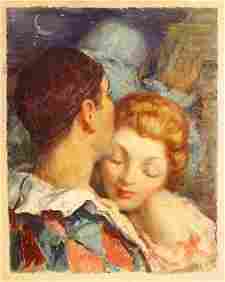 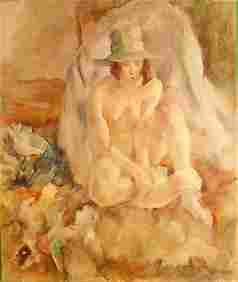 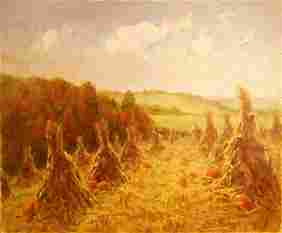 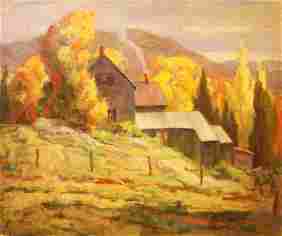 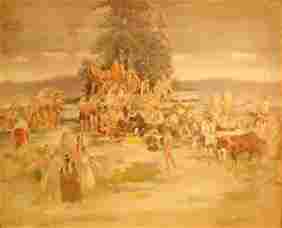 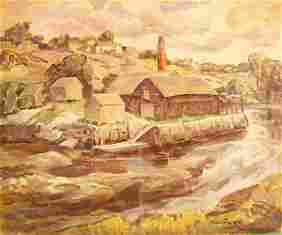 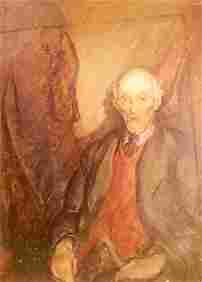 The physical location of the auction is Woodman's Hall, 127 Main St. Essex, Massachusetts with a 11 am preview and 2 pm start time on Monday October 11 . There will be ample free parking and it will be catered. please check our website at www.bertsantiques.com for more information and a map.
1076 Cambridge St.
Cambridge, MA 02139
USA

1. Please Note: These artworks have been in storage for decades. All pieces are sold in as found condition and may need varying degrees of cleaning and restoration. Photos of works are provided for reference purposes only. Due to differences between various computer systems, monitors and camera equipment we cannot guarantee the color, tonal, or detail accuracy of the photo depictions of the works. If you have any specific questions regarding an item please send your question with the lot number ( not ebay ID number) and short description of the item in question by email to bertr@comcast.net

2. All sales are final. Everything is sold "as is" and "where is", including any errors of description,imperfections, and/or faults.

4. A 5% Mass. Sales tax applies to each lot shipped to a Massachusetts address or picked up in Massachusetts unless a valid State Resale Tax number is submitted.

5. All merchandise must be paid in full within five days of purchase.

6. All merchandise must be paid in full before the release of said merchandise.

7. Payment is to be made by MasterCard, American Express, and Visa

8. Bert Rosengarten, his employees, or agents are not responsible for errors of description of authenticity or genuineness of any lot. No warrantees, guarantees, or representations are given by Bert Rosengarten Auctions to any buyer for any lot whatsoever.

9. Bert Rosengarten Auctions will not be responsible for any errors or omissions in connection with absentee bids nor does the auction house assume responsibility for failure to execute bids or to notify an absentee bidder of the results of an auction.

10. In the event of duplicate left bids, preference will go to the first bid received

11. Your Bid is a binding contract. Please bid only if you are serious about purchase. If you are the winning bidder than you have entered into a legally binding contract to purchase the property from the seller. You should contact the seller if you have any questions before bidding.

12. Purchaser assumes all responsibility for items once they are sold.

13. As a courtesy and convenience to our clients employees will assist and arrange packing and shipping. All charges and expenses are the responsibility of the purchaser. The auction house and its employees do not accept any risk or responsibility that may occur from damage or loss once the item is sold.

14. The auctioneer or any employee of Bert Rosengarten Auctions is not liable for any injury, damage or loss incurred in conjunction with this sale.

A 5% Mass. Sales tax applies to each lot shipped to a Massachusetts address or picked up in Massachusetts unless a valid State Resale Tax number is submitted.