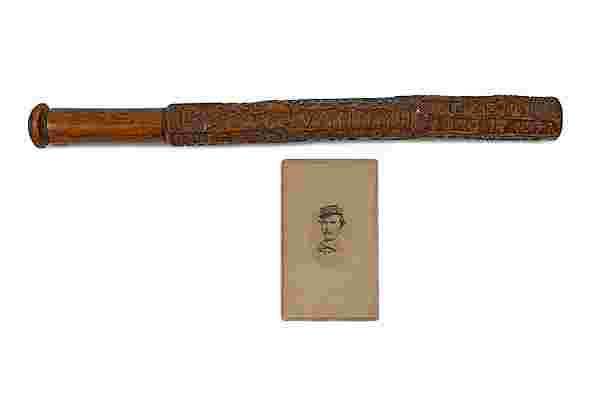 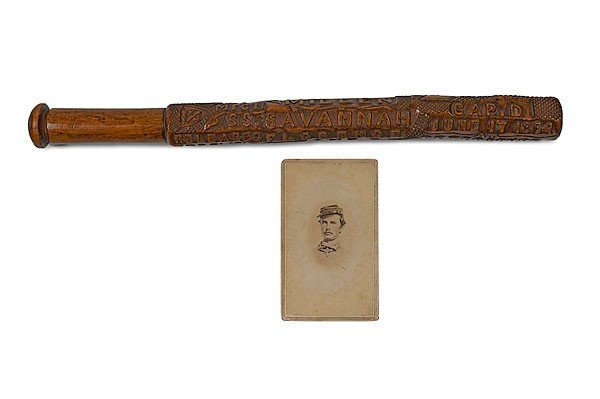 Lot of 3 items related to Prisoner of War Vernon W. Thorp of the 1st Michigan Sharpshooters, including: a remarkable wooden, folk art club, 12.75 in., with relief-carved inscription, starting with the top panel, which includes Thorp's initials, plus capture date and location: V.W.T./ Cap.d June 17 1864./ at/ Petersburg, VA; the middle panel, which includes the prison camps where he was held: Andersonville, GA./ Millen (GA)/ Savannah (GA)/ Florence (SC)/ and/ Charleston (SC); then the bottom panel, which includes his release date and location (which also falls under prison camps where he was held): Released/ Dec. 10/ at/ Charleston, plus his regiment I/ Mich/ SS. The club is wonderfully carved with his corps emblem, a bible, vines, arrows, a checkered-pattern, and a star. The club is accompanied by a vignetted cdv portrait of Thorp in uniform and a novel titled Andersonville, by MacKinlay Kantor. Cleveland and New York: The World Publishing Company, 1955. Inside cover inscribed by Thorp's descendant, Jay Thorp. The consignor acquired this grouping from a gentleman who was a friend of the grandniece of Vernon W. Thorp, who resided in California.

Vernon W. Thorp (ca 1845-1865), enlisted in Detroit, MI, on Aug. 10, 1863 as a private and was mustered into Co. B of the Michigan 1st Sharpshooters. The 1st MI SS was organized at Dearborn and Kalamazoo between April and Oct. of 1863, with six companies recruited under the direction of Col. Charles V. DeLand. The regiment saw action in several engagements starting in July of 1863, when Confederate raider, John Morgan, marched through Indiana. It was directed to proceed to Indianapolis to intercept Morgan at some point in the state, and the sharpshooters had several skirmishes with the Confederates, obliging them to "move forward" into Ohio, where Morgan and the remnant of his band were captured. The regiment was constantly engaged with the enemy, participating in battles and skirmishes at Wilderness, Spotsylvania, Oxford, North Anna, Totopotomoy, Bethesda Church, Cold Harbor, and Petersburg, where Thorp was captured by Confederate troops on June 17, 1864.

Thorp was first transported to the infamous Andersonville Prison, but, as the club indicates, he was moved to Camp Lawton in Millen, GA in Oct. 1864 because of the overflow of prisoners at Andersonville. The prison camp at Millen only operated for 6 weeks. Thorp also spent time in Savannah, GA, presumably at Camp Davidson. The majority of prisoners that were sent to Savannah arrived starving, weak, and ill from their stay at Andersonville, and several hundred Union prisoners are estimated to have died while in Savannah. Thorp was also held at one of the worst Confederate Prison Camps in Florence, SC, which was quickly erected in Sept. 1864 when Andersonville was threatened by Union Troops, and in the city jail in Charleston, SC, where he was eventually released on Dec. 10, 1864, as referenced on club. Thorp was mustered out on July 28, 1865 at Delaney House, Washington, D.C., but he purportedly died the same year, probably as a result of the horrible conditions in which he lived while held as a prisoner of war.

9,995 Followers
Get notifications from your favorite auctioneers.
As Seen On
Shop With Confidence
Since 2002, LiveAuctioneers has made exceptional items available for safe purchase in secure online auctions.
Popular Searches
Artists & Creators
Brands
Style Periods
Origins
Company
Winning
Selling
Â© 2002-2020 LiveAuctioneers. All Rights Reserved.Cookie PolicyTerms & ConditionsPrivacy Policy
This site is protected by reCAPTCHA and the Google Terms of Service and Privacy Policy apply.
BACK TO TOP