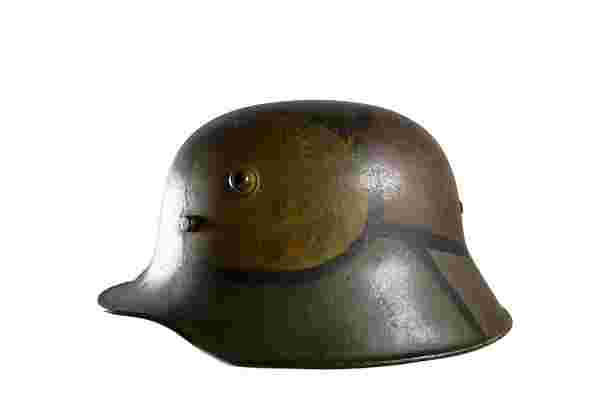 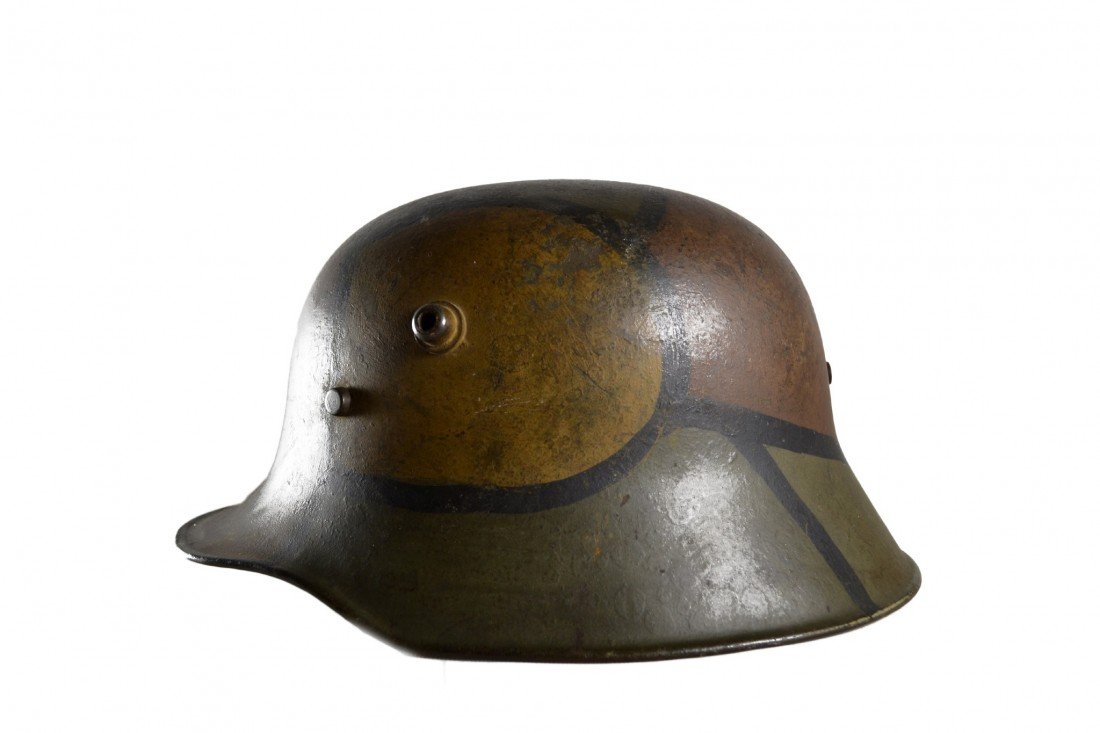 Helmet, German M1916, Camouflage, WWI era. Signed on interior "W. Liebold".
Provenance: Miki and James J. Mangan III of Fairfield, CT
Size: 9" L x 6" H x 12" W x 7.5" D
Weight: 2lbs 6oz
Condition: excellent, with leather liner intact and very good condition camo paint.
************************************************************
The Stahlhelm was introduced into regular service during the Verdun campaign in early 1916.
The M1916 design had side-mounted horn-like ventilator lugs which were intended to be support for an additional steel brow plate or Stirnpanzer, which only ever saw limited use by snipers and trench raiding parties, as it was too heavy for general use.[6]
The shell came in different sizes, from 60 to 68, with some size 70s reported. The suspension, or liner, consisted of a headband with three segmented leather pouches, each holding padding materials, and leather or fabric cords could be adjusted to provide a comfortable fit. The one-piece leather chin strap was attached to the shell by M1891 chinstrap lugs, the same kind used in the Pickelhaube helmet.
The M1916 design provided excellent protection: Reserve Lieutenant Walter Schulze of 8th Company Reserve Infantry Regiment 76 described his combat introduction to the helmet on the Somme, 29 July 1916:
"... suddenly, with a great clanging thud, I was hit on the forehead and knocked flying onto the floor of the trench... a shrapnel bullet had hit my helmet with great violence, without piercing it, but sufficiently hard to dent it. If I had, as had been usual up until a few days previously, been wearing a cap, then the Regiment would have had one more man killed."
But the helmet was not without its flaws. The ventilator horns often let cold air in during the winter, requiring the wearer to block the vents with mud or fabric. The large, flared skirt tended to make it difficult for soldiers to hear, distorting surrounding sounds and creating an echo when the wearer spoke.
Originally painted Feldgrau (field grey), the Stahlhelm was often camouflaged by troops in the field using mud, foliage, cloth covers, and paint. Official issue cloth covers in white and grey appeared in late 1916 and early 1917. Camouflage paint was not formally introduced until July 1918, when German Army Order II, No 91 366, signed by General Erich Ludendorff on 7 July 1918, outlined official standards for helmet camouflage. The order stipulated that helmets should be painted in several colors, separated by a finger-wide black line. The colors should be relevant to the season, such as using green, brown and ochre in summer.

182 Followers
Get notifications from your favorite auctioneers.
As Seen On
Shop With Confidence
Since 2002, LiveAuctioneers has made exceptional items available for safe purchase in secure online auctions.
Popular Searches
Artists & Creators
Brands
Style Periods
Origins
Company
Winning
Selling
Â© 2002-2020 LiveAuctioneers. All Rights Reserved.Cookie PolicyTerms & ConditionsPrivacy Policy
This site is protected by reCAPTCHA and the Google Terms of Service and Privacy Policy apply.
BACK TO TOP