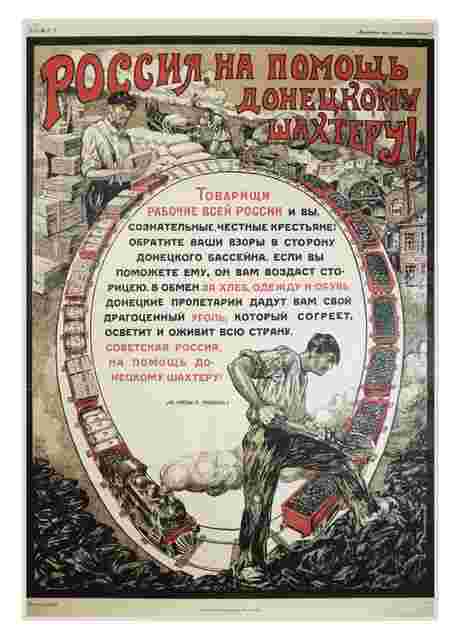 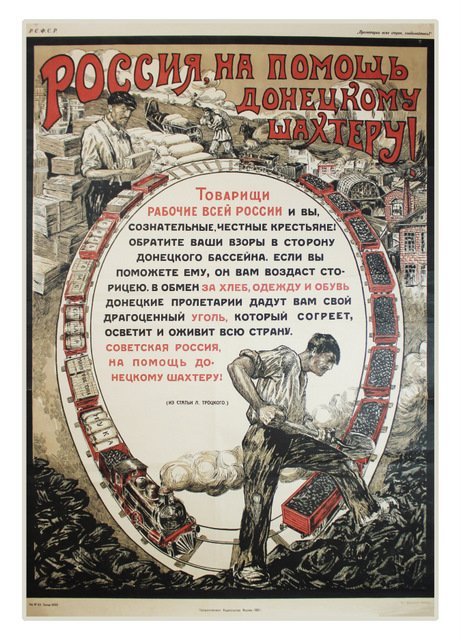 The poster's title and the large quote in the center come from Trotsky's letter published in November 1920, after Trotsky, who considered the uninterrupted operation of coal mines through the winter a necessary condition for the survival of the Republic, had paid an inspection visit to the region. Needless to say, many archive copies were intentionally destroyed during the Stalinist era. More interestingly, calls to remove the poster originally surfaced much earlier. Mayakovsky, in his speech Visual Arts and Industrial Propaganda, given at the March 1921 All-Union Conference on Industrial Propaganda, complained that the poster (and the poster offered as a next lot) came out too late:

“These posters were ordered by the Mining Council, with an approval from the Central Committee of the Miners Union, at the time of the Donbass inspection (by Trotsky), several months ago. Now these posters are published. Were they published in time, they would have had revolutionary significance...Now the poster works for counter-revolution, because the workers interpret it in the following way: 'You are asking us, who have no food, no immediate necessities, to send food to Donbass?' The poster that is late in publishing acquires an opposite, counter-revolutionary meaning, and, Comrades, most of our posters, most of the primitive poster propaganda, had been appearing with a delay.”

The poet's reasoning, while strategically flawed - the country needed coal not just for winter heating - is, nevertheless of considerable interest, as it reflected a popular sentiment.

17 Followers
Get notifications from your favorite auctioneers.
As Seen On
Shop With Confidence
Since 2002, LiveAuctioneers has made exceptional items available for safe purchase in secure online auctions.
Popular Searches
Artists & Creators
Brands
Style Periods
Origins
Company
Winning
Selling
© 2002-2020 LiveAuctioneers. All Rights Reserved.Cookie PolicyTerms & ConditionsPrivacy Policy
This site is protected by reCAPTCHA and the Google Terms of Service and Privacy Policy apply.
BACK TO TOP