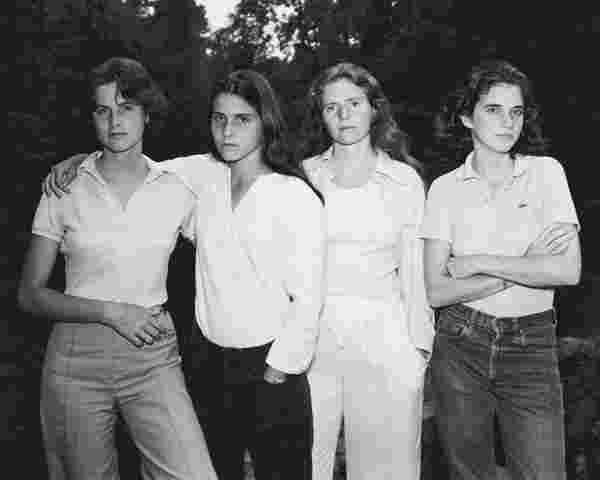 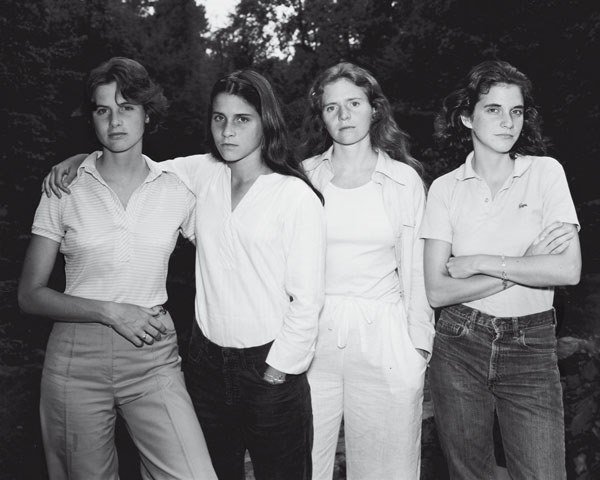 NICHOLASNIXONAmerican, b. 1947The Brown Sisters, 1975-2004.Complete set of thirty gelatin silver prints.7⅝ x 9¾ in. (19.4 x 24.8 cm).Each signed, titled, dated and annotated in pencil on the verso; each print is one from an edition of 50.
view complete setPROPERTY FROM THE STRAUSS COLLECTIONProvenance
Sotheby's, New York, May 12, 1986, lot 319 for images dating 1975-1983.
Acquired directly from the artist for images dating 1984-1997.
And with Fraenkel Gallery, San Francisco, for images dating 1998-2004.Exhibition
Double Vision: Photographs from the Strauss Collection, University Art Museum, Long Beach and Museum of Photographic Arts, San Diego, 2001-2002.Literature
Galassi, Nicholas Nixon: Pictures of People, 1988, for thirteen images.
The Museum of Modern Art, Nicholas Nixon: The Brown Sister's, 1999, for twenty-five images.
Glenn, Double Vision, 2000, n.p., for four images.

One of the cornerstones of Edward and Joyce Strauss's collection, a complete set of Nicolas Nixon's serial portrait, The Brown Sisters, is one of the most compelling explorations of portraiture in contemporary art today. It began with Nixon's initial attempt at photographing his wife Bebe Brown Nixon and her sisters in 1974, but not pleased with the outcome, Nixon destroyed the negative. In 1975, the year of his inclusion in the New Topographics exhibition at George Eastman House, Nixon felt he succeeded with the sitting and proposed the annual project. The family agreed with the proviso that the order of the sitters remain constant from year to year, always at eye level. Stretching over the past 30 years, viewers are granted a glimpse into a moment in a year of these women's lives and we are shown not only incidental changes in the background, lighting and dress but also the gradual, incremental aging of the women, and subtle changes in their demeanor and relationships with one another. The photographs have their roots in family snapshots but are also preceded by Alfred Stieglitz's extended portrait of Georgia O'Keeffe, Harry Callahan's stark and sensual use of his wife and daughter as subjects and Emmet Gowin's family studies. What these examples share with The Brown Sisters is the rigor of the artist and the commitment of the women to the project, transcending their heritage to create a moving testament of human relationships over time. Nixon has created a body of work that parallels not only the aesthetic breakthroughs he and his peers are known for but also reflects the essence of the Baby Boomer generation. In the thirty portraits offered here, we are faced with a mirror, an image of our own aging allowed by the inherent invitation of comparison.

Originally conceived as contact prints in an open edition, in 1987 Nicolas Nixon limited the number of prints to 50. The artist recently added a larger scale print edition of 7 complete suites, to be available only to museums. With many of the works sold out, "vintage" sets, such as the one offered here, are rare and at the time of the publication of this catalogue, complete sets have been located at the Museum of Modern Art, New York, George Eastman House/International Center of Photography, Fogg Art Museum and at the National Gallery of Art, Washington, D.C., where it will be exhibited, November 13, 2005 – February 20, 2006.

New York, NY, USA
325 Followers
Get notifications from your favorite auctioneers.
As Seen On
Shop With Confidence
Since 2002, LiveAuctioneers has made exceptional items available for safe purchase in secure online auctions.
Popular Searches
Artists & Creators
Brands
Style Periods
Origins
Company
Winning
Selling
Â© 2002-2020 LiveAuctioneers. All Rights Reserved.Cookie PolicyTerms & ConditionsPrivacy Policy
This site is protected by reCAPTCHA and the Google Terms of Service and Privacy Policy apply.
BACK TO TOP