(George, Baron).- A Voyage to the South-Seas...Per

Tott Memoirs8230containing the State of the
See Sold Price

245A Anderson George Voyages Round the World
See Sold Price 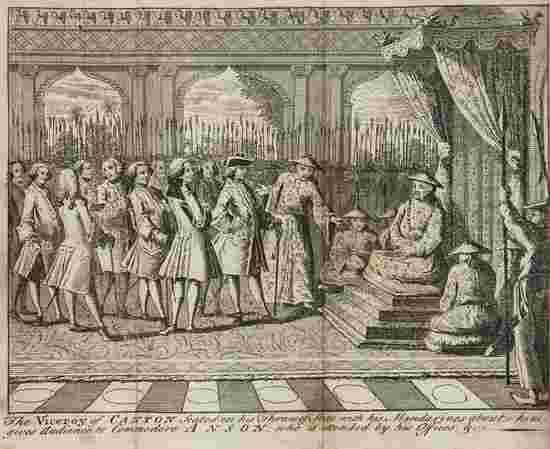 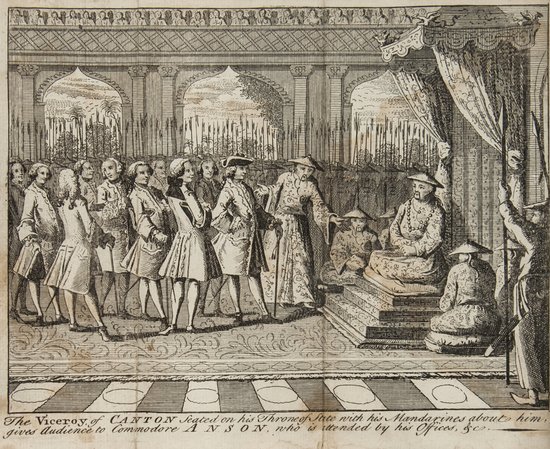 Anson (George, Baron).- A Voyage to the South-Seas...Performed from the month of September in the year 1740, to June 1744, by Commodore Anson, in His Majesty's ship the Centurion...By an Officer of the Squadron, 2 parts in 1, including Appendix, 5 folding engraved plates, lacking portrait and 3E1, C3 outer edge frayed with loss of text, occasional staining, contemporary panelled calf, rebacked, preserving part of original backstrip, corners repaired, [Hill p.311], Printed and Sold by R.Walker, in Fleet-Lane, 1744; and Barrow's Life of Anson, 1839 8vo (2) sold not subject to return. Provenance: ?Nicholas Maine, Rocquette House, Guernsey (1740s extensive ink ownership inscription to front free endpaper).

***An early 'unauthorized account of Anson's voyage.... the appendix relates to the history of voyages and explorations in the Pacific and the Far East, together with descriptions of some of the countries visited. There is a table for estimating the value of diamonds, and interesting plates, including a very strange one depicting seals and sea lions on Juan Fernández Island' (Hill)..

(George, Baron).- A Voyage to the South-Seas...Per

343 Followers
Get notifications from your favorite auctioneers.
As Seen On
Shop With Confidence
Since 2002, LiveAuctioneers has made exceptional items available for safe purchase in secure online auctions.
Popular Searches
Artists & Creators
Brands
Style Periods
Origins
Company
Winning
Selling
Â© 2002-2020 LiveAuctioneers. All Rights Reserved.Cookie PolicyTerms & ConditionsPrivacy Policy
This site is protected by reCAPTCHA and the Google Terms of Service and Privacy Policy apply.
BACK TO TOP