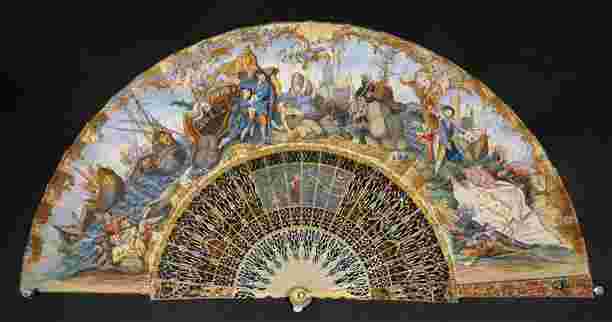 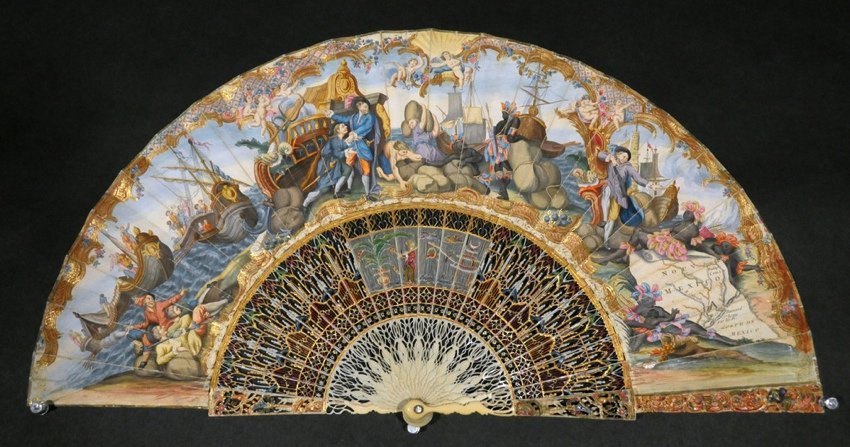 540. [TEXAS: LA SALLE EXPEDITION]. Hand-made, vividly hand-painted folded paper fan on 24 carved ivory sticks and guards (monture) with mother of pearl inlay, gilt, and uncolored stones, elements of Chinoiserie and, simultaneously, of the Gothic revival. Radius is 27.5 cm; fan is ca. 55 cm fully opened at 180 degrees.[England? ca. 1750?]. Except for a few minor separations in the paper, two minor cracks in the ivory, and small losses of color at a few folds, in very fine condition. An amazing survival in working order of a unique item of Americana.

The front of the fan is divided into two elements. Its foreground is divided into three thematic segments. At the lower right is a small, engraved map of the Texas coast entitled “Nouv Mexico” showing the area between the Colorado River and the Trinidad. The map, apparently after Delisle (see herein), was engraved on a separate sheet of paper, and then mounted on the fan paper. It shows the area where La Salle landed and established his colony. The middle segment of the fan is the busiest and is dominated by two Europeans. The left segment is anchored at the far lower left by three figures, one of whom is recumbent with a musket. He is accompanied by a child and another figure holding a lit pipe. The background is a busy naval scene, showing several ships. Two on the left have aboard several people, including numerous women and children, presumably colonists.

The back of the fan shows a much calmer shoreline scene with a woman seated in foreground, while several men tend to a small boat in the near distance.

Forensic examination of the paints used on the fan indicate that one of the colors is Prussian blue, which came into existence in 1704 and was widely available by 1722. The green paint incorporates yellow ochre, an eighteenth-century ingredient. Staff at The Fan Museum in England date the fan as ca. 1750 and believe the structure proves it to be English.

Austin, TX, USA
51 Followers
Get notifications from your favorite auctioneers.
As Seen On
Shop With Confidence
Since 2002, LiveAuctioneers has made exceptional items available for safe purchase in secure online auctions.
Popular Searches
Artists & Creators
Brands
Style Periods
Origins
Company
Winning
Selling
© 2002-2020 LiveAuctioneers. All Rights Reserved.Cookie PolicyTerms & ConditionsPrivacy Policy
This site is protected by reCAPTCHA and the Google Terms of Service and Privacy Policy apply.
BACK TO TOP