314 From the Studio of Rembrandt Peale
See Sold Price

315 In the Manner of Rembrandt Peale
See Sold Price 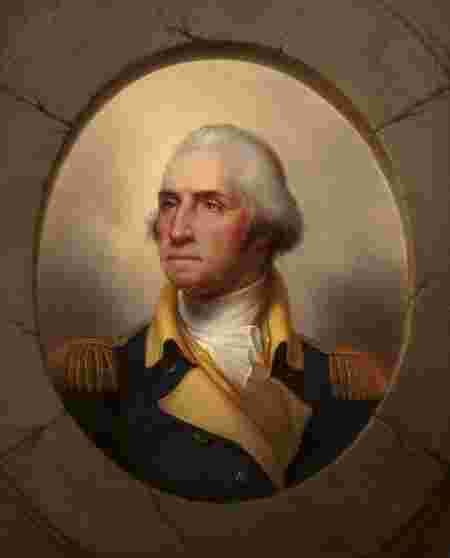 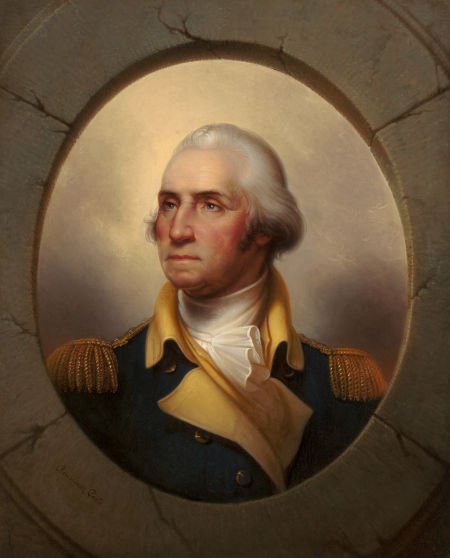 Intentionally rivaling fellow portraitists John Trumbull, Gilbert Stuart, and his own father, Charles Willson Peale, Rembrandt Peale made it his professional mission to render "the national portrait and standard likeness" of George Washington.1

In 1787, as a boy in Philadelphia, Rembrandt had met Washington, whom Charles Willson had recently celebrated in George Washington at the Battle of Princeton, and in 1795, at the age of seventeen, he requested from his father his first portrait sitting with the president; the resulting George Washington, an accomplished naturalistic study, focused on facial details over costume and captured an aging but proud man.

Over the next two decades, Rembrandt Peale painted various likenesses of Washington after other artists like the sculptor Jean-Antoine Houdon, and in 1823, he verbalized his determination to create the official portrait:

No Artist ever found his pride more strongly excited by magnitude and interest of his purpose than mine to rescue from oblivion the aspect of a Man who would forever be venerated as the "Father of his Country."2

Peale's purpose was fueled by commercialism, however, as much as nationalism, as a popular portrait had the potential to generate a demand for replicas. The 1824 George Washington, Patriae Pater realized Peale's goals: it memorialized the president as a classical hero, depicting him in velvet finery against an ethereal ground and set within an oval trompe-l'oeil stone frame, carved with an oak wreath and the head of Jupiter. The portrait also served as the model for Peale's subsequent lucrative Washington commissions, including lithographs, equestrian portraits, and numerous smaller "porthole" portraits.

The present George Washington of 1856, from the distinguished Hendershott Collection, exemplifies this "porthole" portrait, otherwise known as the George Washington Copy, which derived from the Patriae Pater and solidified Peale's reputation as the foremost 19th-century Washington painter. Around 1846, Peale began producing the Copy, featuring the Patriae Pater portrait bust within a simplified stonework frame, and available in different sizes (the standard was 25 x 30"), in military or civilian dress, and with orientation to the left or right. For the rest of his career, he solicited commissions for the Copy through pamphlets and a traveling lecture, "Washington and his Portraits." An 1857 article in The Crayon describes the successful lecture Peale delivered at the New York Historical Society:

At the close of the reading Mr. Peale exhibited various portraits of Washington, together with one of Mrs. Washington, all painted by himself; the pictures were brilliantly lighted, and so arranged as to be seen to great advantage. The remarks upon the portraits were interspersed with anecdotes, personal reminiscences, and historical facts, possessing marked interest, as they were listened to with unflagging attention.3

As part of his promotion of the George Washington Copy in these lecture-exhibits, Peale designed around 1853 a pendant Martha Washington portrait, including this fine 1856 version from the Hendershott Collection. Based on Charles Willson Peale's original 1795 portrait, Rembrandt's Martha Washington captured the first lady as a stately matron, offsetting her strong visage with her ruffled bonnet and diaphanous shawl and balancing the creams of her face and costume with shadowed background architecture. In their 1850s context, Peale's George Washington and Martha Washington together would have reminded audiences of the nobility and unity of America's founding era, indeed, a foil to the growing anxiety of the country on the brink of the Civil War.

13,156 Followers
Get notifications from your favorite auctioneers.
As Seen On
Shop With Confidence
Since 2002, LiveAuctioneers has made exceptional items available for safe purchase in secure online auctions.
Popular Searches
Artists & Creators
Brands
Style Periods
Origins
Company
Winning
Selling
Â© 2002-2020 LiveAuctioneers. All Rights Reserved.Cookie PolicyTerms & ConditionsPrivacy Policy
This site is protected by reCAPTCHA and the Google Terms of Service and Privacy Policy apply.
BACK TO TOP