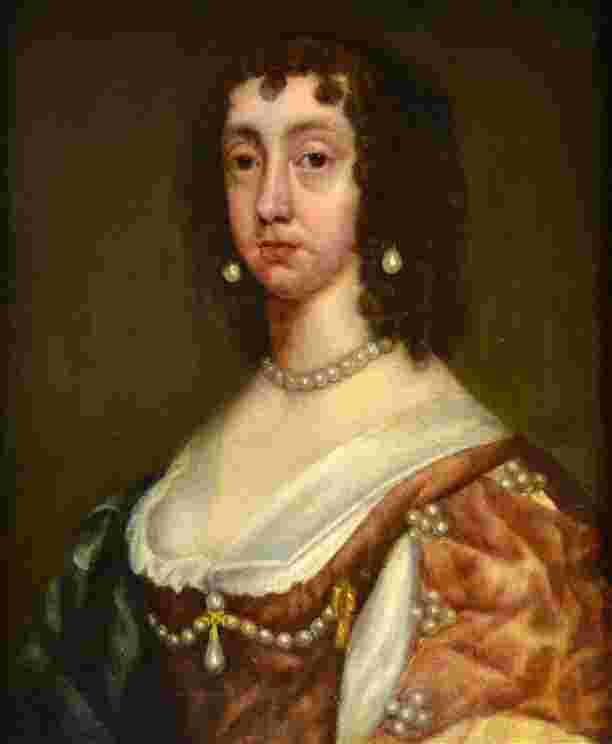 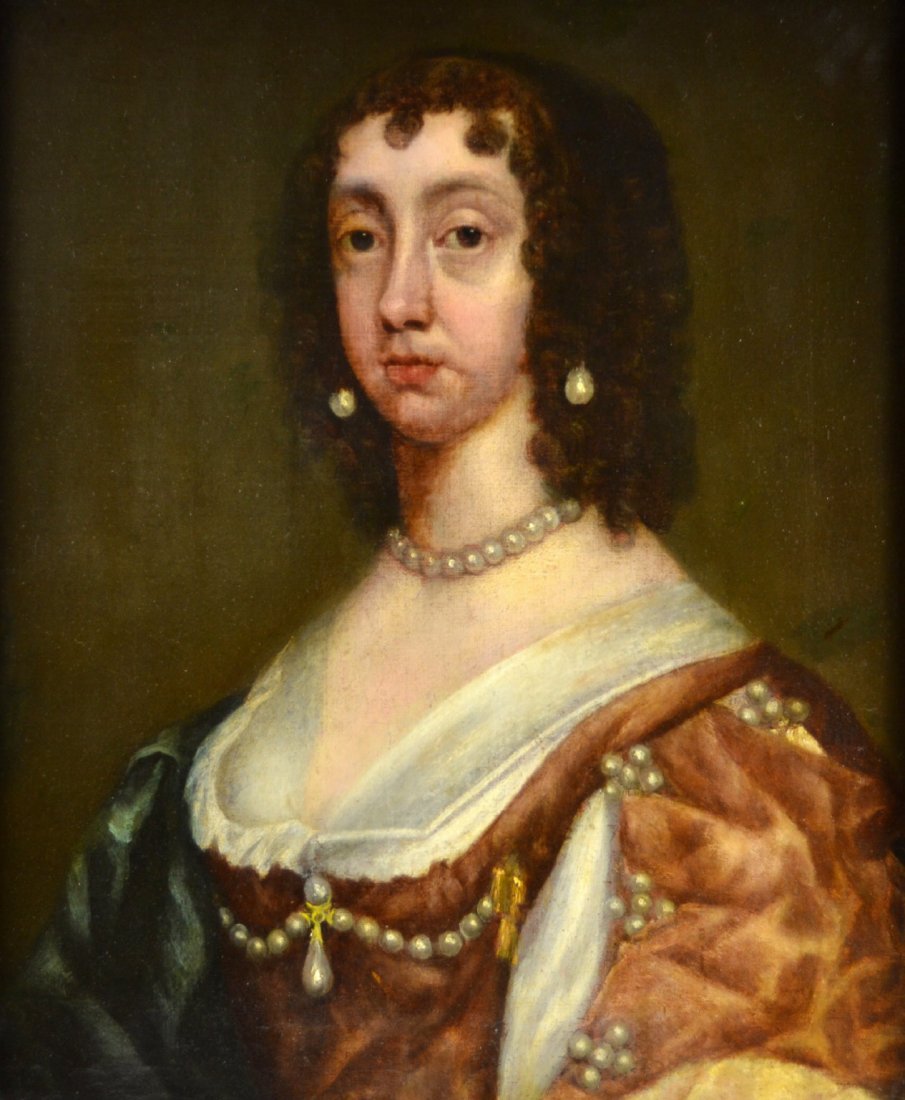 Medium: Oil
Support: Canvas
Artist: Circle of Theodore Russel
Country of Origin: Great Britain
Title & Description: Painting depicts a portrait of Lady D'Aubigny wearing pearl earrings, a pearl necklace and pearl decorations on her garment.
Signature: Unsigned
Date of Work: 17th Century
Frame: Later
Work Size: 24" H x 20" W
Frame Size: 33" H x 22" W x 2" D
Weight: 12 pounds
Condition: Unlined, fine craquelure, edge lined. Minor inpainting under newer varnish.
Artist Biography: Catherine Howard, eldest daughter of Theophilus Howard, 2nd Earl of Suffolk and his wife, Lady Elizabeth Home. The infamous Lady Frances Howard, Countess of Essex and Somerset was her aunt while Thomas Howard, 3rd Duke of Norfolk and terrifying uncle of both Anne Boleyn and Catherine Howard was her great great great grandfather.There is no definite date of birth for Lady Catherine but it was probably at some point around 1620. It’s not even known where she was born but it was probably either at her family’s principal country seat of Audley End near Saffron Walden in Essex or at their London residence, Suffolk House near Charing Cross. The family also owned Framlingham Castle until they sold it on in 1635.As was only natural for a girl of her station, Lady Catherine joined the court in 1638 when she was in her teens and was immediately lauded as A Beauty. It didn’t take long before she caught the eye of the twenty year old Lord George Stuart, Sieur d’Aubigny and second son of Esmé Stuart, Duke of Lennox. The Duke of Lennox died in 1624, leaving his children as wards of his cousin, Charles I, which meant that he had to give permission for their marriages.Lord George was an extremely eligible match – he was a Stuart after all and his family had enjoyed royal favour for several generations. His eldest brother, James, who was now Duke of Lennox had only a year earlier married the renowned court beauty Lady Mary Villiers, daughter of the murdered Duke of Buckingham and would go on to be created Duke of Richmond in 1641.Catherine and George were thwarted in their wish to be together. They decided to employ subterfuge and marry in secret in 1638 and without the permission of either her parents or the King. Luckily, it seems that all’s well that ends well and the happy couple were forgiven for their transgression and welcomed back to court, where they enjoyed much favour. Their London residence was on Queen’s Street near Covent Garden and it was there that in January 1640 her younger sister Lady Margaret Howard was married to Roger Boyle, the 1st Earl of Orrery. This wedding is significant because it inspired Sir John Suckling’s A Ballad Upon a Wedding, which is one of the most delightfully florid pieces of Cavalier poetry. The D’Aubigny couple were to have two children – Sir Charles Stuart, on the 7th of March 1639 and Catherine Stuart, on the 5th of December 1640.Sadly it would all go awry very soon afterwards and when the English Civil War broke out, George, along with his brothers naturally chose to take the side of his relative, Charles I, joining the royal army at York in 1642. He’d seen warfare before when he fought with the French against Spain and was no stranger to the soldier’s life. Tragically though he was to be killed at Edgehill, the first major clash of the Civil War on the 23rd of October 1642. He was just twenty four years old.His younger brothers Lord John and Lord Bernard Stuart would also die in the course of the war. They were the subjects of one of Van Dyck’s best known portraits. The epitome of Cavaliers, I think.Poor Catherine was left alone in the world with two small children and at first was even beset by financial problems as her husband had died without leaving a will and his estate would not be released to her until June 1647. In the meantime, Catherine, always intrepid and, as is evidenced by her secret marriage, with a taste for subterfuge made herself useful as a spy by hiding official documents in her ringlets or beneath her petticoats and smuggling them around the country or even overseas although she seems to have been mostly based with the rest of the royal court at Oxford during this period.At some point, she married again to James Livingstone, 1st Earl of Newburgh, but they did not have children. The couple escaped to the continent in the late 1640s and Catherine would die at the Hague in 1650 at the age of thirty, leaving her children to be raised in France with their uncle, Lord Ludovic Stuart.
Meta: painting, art

182 Followers
Get notifications from your favorite auctioneers.
As Seen On
Shop With Confidence
Since 2002, LiveAuctioneers has made exceptional items available for safe purchase in secure online auctions.
Popular Searches
Artists & Creators
Brands
Style Periods
Origins
Company
Winning
Selling
Â© 2002-2020 LiveAuctioneers. All Rights Reserved.Cookie PolicyTerms & ConditionsPrivacy Policy
This site is protected by reCAPTCHA and the Google Terms of Service and Privacy Policy apply.
BACK TO TOP