Collection of Samaritan Manuscripts / Booklets and 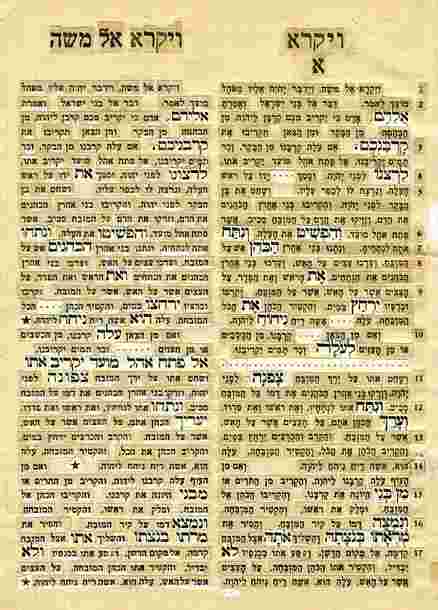 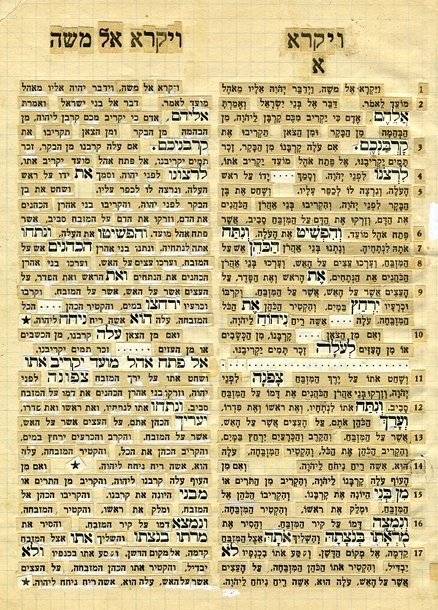 Large collection of Samaritan booklets, books and manuscripts from the 19th and 20th centuries, from the estate of Avraham Nur Tsedakah, who during the 1960s and 70s worked as editor and printer of annotated editions of Samaritan manuscripts with explanations of Samaritan laws and customs.
The collection is composed of the following:
Manuscripts by Avraham Nur Tsedakah:
1. "Manuscript" of the "Five Books of Moses â€“ Jewish version, Samaritan version, emphasizing the precise differences between the two" (according to an ancient Samaritan manuscript from the 11th century), edited by Avraham Nur and Ratzon Tsedakah. Four volumes: Bereshit, Vayikra, Bamidbar, Devarim. In this edition, the Jewish version is on the right hand side and the Samaritan version is on the left, without vowels. The preparation of these "manuscripts" was done by cutting and pasting the printed words by hand, (sometimes an individual word is cut out and sometimes several words together. The vowels were erased with correction-fluid). Apparently, these manuscripts were used for repeat printings in the mid-60s. Both versions were printed in Hebrew.
2-3. Manuscripts by Avraham Nur Tsedakah, the second and third parts of the photocopy edition of Tevat Markah. The second part, "about the depths of the Eden spring, by the Great Scholar Our Master Markah" (1990s) is written on large paper sheets in Samaritan. The third part (1995) was written on regular paper leaves. Both parts are written in Samaritan writing, in Hebrew and Arabic (the second part is lacking two leaves).
4. Manuscript by Avraham Nur Tsedakah, sections of the books of Shemot and Devarim, written on large chromo paper sheets. Samaritan writing in square script.
5. Volume of prayers in the handwriting of Avraham Nur Tsedakah, mid 40s. Samaritan writing.
Samaritan manuscripts:
* 14 volumes of Samaritan manuscripts, some from the second half of the 19th century and some from the first decades of the 20th century. Among them: a volume of a Samaritan Chumash (large format), written by Avraham ben Marchiv HaTzafri (1922) and other volumes of the Chumash.
* Many prayer books, including: a volume of prayers from 1856 composed of many varied prayers for Passover, a volume of prayers and songs for the month of Nissan and Passover, with words of praise to G-d by Tuvia ben Yitzchak HaCohen; a volume of prayers from the beginning of the 20s with prayers for Chag HaKatzir (the harvest festival), parts of the Ten Commandments and more; an especially handsome volume of prayers from 1863, by Ya'akov ben Aharon ben Shlomo ben Tuvia HaCohen, with the prayers of Hallel and blessings, Shirat Hayam, prayer and blessing for those who fulfill G-d's laws, prayer for reinforcing belief in G-d, etc; and other volumes with prayers for the Sabbath of Devarim, eve of Midrata and for the day of Mikrata (Ma'amad Har Sinai), for blessing and rain, health and cure of pain, curse for slanderers and enemies, bringing near days of light, counting the Omer and the Festival of Shavuot, etc. Most in Samaritan writing, some in Arabic. Many volumes have moth damage.
* Large certificate related to redemption for marriage and birth, signed by Binyamim ben Shalach HaTzafri (1910s or 20s).
Books, booklets and manuscript photocopies:
Books and booklets published by Avraham Nur and Ratzon Tsedakah (most are lithograph printings of Samaritan manuscripts, in Samaritan writing): * The book of Bamidbar in three columns (the source is in ancient Hebrew, with Samaritan Aramaic translation and Arabic translation). Written, edited and published by Ratzon Tsedakah HaTzafri. Holon, 1968. * The book of Bereshit, Samaritan version with Aramaic and Arabic translations. * Shirot (liturgical poems), the Eve of Kippur, with commentaries on Samaritan laws and customs, written by a selection of various Samaritan writers, Vol. 2, copy handwritten by Ratzon Binyamin Tsedakah. Israel, 1960. * Prayer for the day of Ma'amad Har Sinai (1962). * Prayer of Shabbat Devarim â€“ the Ten Commandments. * Hundreds of photocopied leaves from manuscripts: prayers for the Sabbath and Succot, the Book of Vayikra (Samaritan version), prayers for the weekdays, prayer for the Eve of Chada (Motzaei Shabbat), prayer for Sabbath morning, prayer for the Eve and Day of the New Year, prayer book for the prayers of the Sabbath of Tzamot of Passover (copied and edited by Avraham Nur Tsedakah). Enclosed: * Annotated edition of the Meimar Markah (compilation of homiletics and explanations on the Samaritan Torah written in the 4th century by the Samaritan scholar Markah ben Amram ben Sered), Hebrew-English, edited and translated by John Macdonald. Published by Alfred TÃ¶pelmann, Berlin, 1963. Two volumes.

Collection of Samaritan Manuscripts / Booklets and