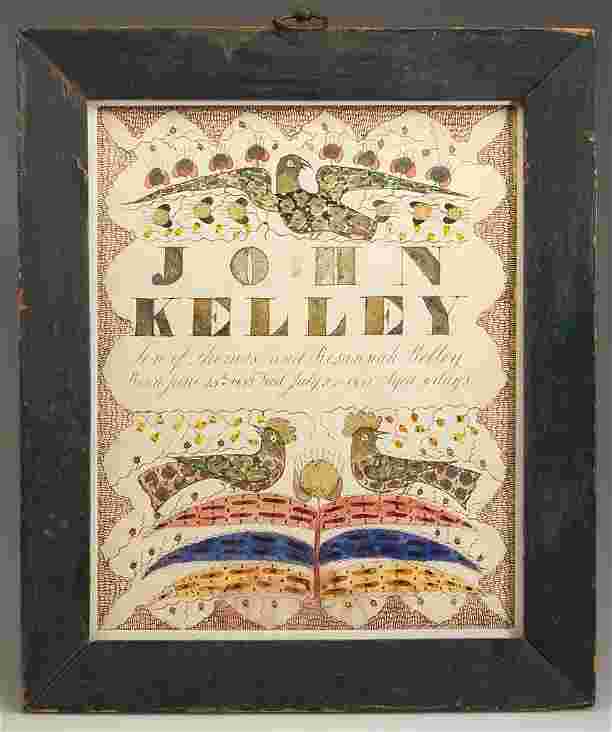 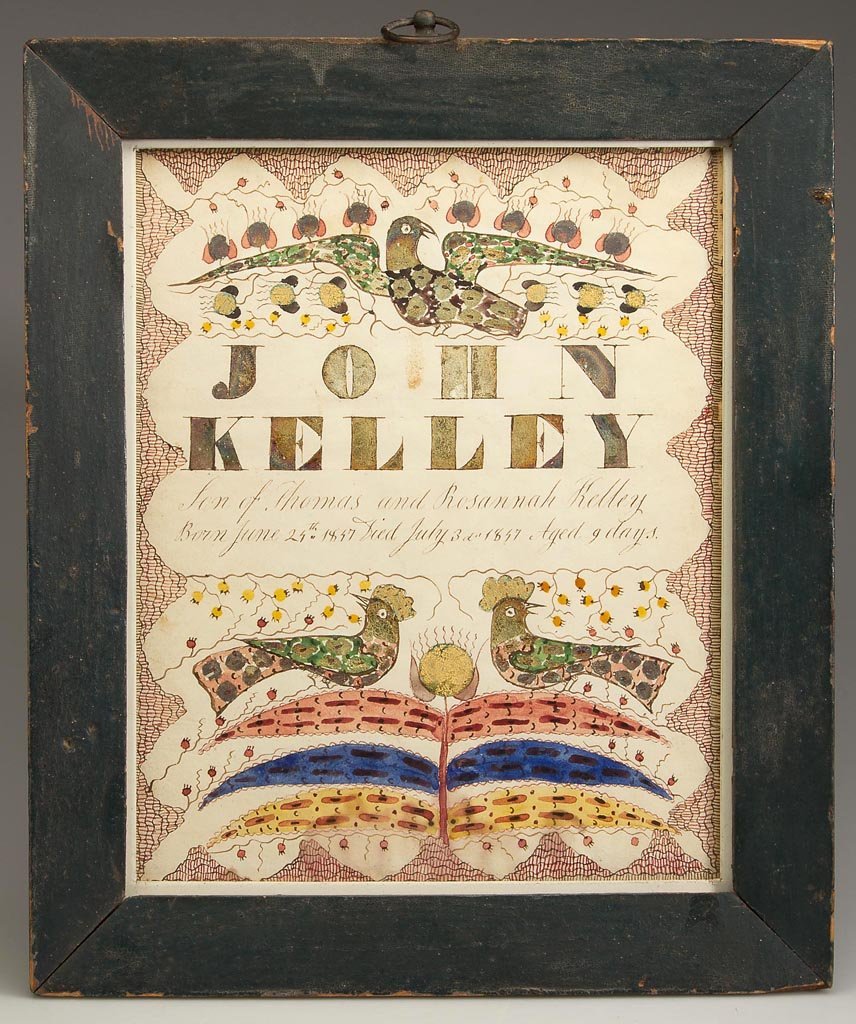 Catalogue Note: This fraktur and the example in lot 269 are exceptionally fine and rare works of Southern folk art and represent two of only six known examples by this unidentified artist working in Frederick and Hampshire Counties in the 1840's and 1850's. The present examples record the birth dates and death dates of both Collam and John Kelley. Sadly, as was true of so many infants and toddlers of the 19th century, Collam lived to be approximately ten months old while John lived only nine days. These works were sold on November 12, 1997 at a Dave Owings Auction in Winchester, Virginia along with a third example made for their sister Elizabeth, born 1842. The details of Elizabeth’s certificate are not known at this time, and there is no record of her in later census data, so it is possible she died at an early age as well. Thus far, the majority of the known works by this artist are memorial records.
Another example sold at the June 22, 2013 Jeffrey S. Evans Americana Auction (lot 527) and may provide crucial evidence as to the identity of the artist. That example was produced for the death of Mary E. Jones in 1849. While a positive identity of Mary has not been established, it is likely that she was Mary Barrack Jones the wife of W. H. Jones. There are several candidates for W. H. Jones in the Winchester area including William Jones (b.c. 1810) who was listed as a "Painter" in the 1850 Federal Census for Frederick Co., a year after Mary’s death. The lettering and unique gilding employed by the creator of this group is atypical for fraktur work, however, it is characteristic of work by 19th-century sign painters. The 1841 instruction book, "A Treatise on Carriage, Sign, and Ornamental Painting" by Orson Campbell illustrates the EXACT Roman lettering seen on all examples in the group. This circumstantial evidence strongly supports the possibility that William Jones was the artist of this group of frakturs.
Another example, marking the 1806 birth of Elizabeth McDonald (1806-1850), was sold by Pook & Pook on June 19, 2009 (lot 66). Elizabeth's father was born in Frederick Co., and her mother was born in neighboring Hampshire Co., now West Virginia. A third example was produced commemorating the 1818 marriage of Benjamin and Rachel Stine of Frederick Co. It appears that Rachel died shortly after 1850. All of these works were likely created around 1850, the same time that William Jones is recorded as a painter in Frederick Co., VA. Research on this elusive artist is ongoing.

9,319 Followers
Get notifications from your favorite auctioneers.
As Seen On
Shop With Confidence
Since 2002, LiveAuctioneers has made exceptional items available for safe purchase in secure online auctions.
Popular Searches
Artists & Creators
Brands
Style Periods
Origins
Company
Winning
Selling
Â© 2002-2020 LiveAuctioneers. All Rights Reserved.Cookie PolicyTerms & ConditionsPrivacy Policy
This site is protected by reCAPTCHA and the Google Terms of Service and Privacy Policy apply.
BACK TO TOP