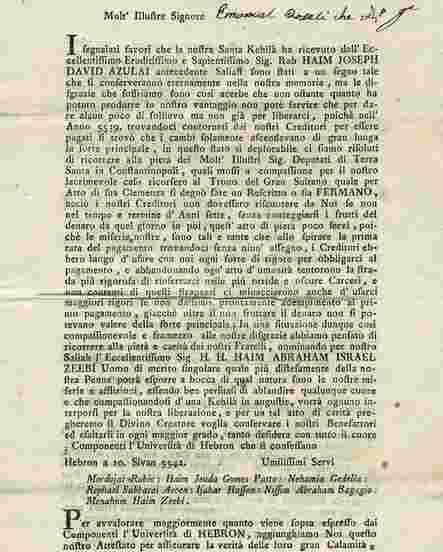 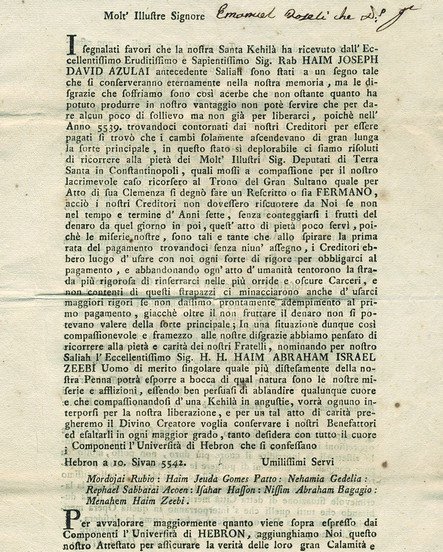 Printed emissary letter in Italian for the emissary of the Hebron community Rabbi Chaim Avraham Ze'evi. [Livorno, 1784]. Italian.
Printed on both sides. The name of the donor Emanuel Roseli is added by hand. The first part is a translation of the emissary letter from the Hebron community written in the month of Sivan 1782 signed by Hebron Torah scholars: Rabbi Mordechai Rubio, Rabbi Chaim Yehuda Gometz Pato, Rabbi Mordechai Gedalya, Rabbi Refael Shabtai HaCohen, Rabbi Yissachar Chason. Rabbi Nissim Avraham Bejayo and Rabbi Menachem Chaim Ze'evi. At the top of the letter, the Hebron sages mention another emissary who was sent ten years earlier on behalf of the Hebron community, Rabbi Chaim Yosef David Azulai â€“ the Chida.
This letter is followed by printed letters of authorization by the "Hebron officials" in Constantinople, from the month of Adar Aleph 1783 followed by a letter of recommendation by the Chida who was a close friend and relative of Rabbi Chaim Avraham Yisrael Ze'evi, which the Chida wrote in Livorno in Cheshvan 1784. Apparently, this leaf was printed that same year since we know that in that same year another version of this leaf was printed in Livorno in Hebrew, the original language in which the letters were written.
Rabbi Chaim Avraham Yisrael Ze'evi, one of the Hebron sages, was sent twice as emissary of the city of Hebron to Europe. The first time (1774-1778) he traveled to Ashkenazi countries and the second time (1782-1789), also to Italy. In his first journey, he stayed in Amsterdam where he met his friend the Chida who also was traveling on behalf of the city of Hebron. Throughout Rabbi Ze'evi's stay in Amsterdam the two were loving companions and operated together as described at length by the Chida in the journal of his travels Ma'agal Tov, "â€¦I have found that which my soul loves, the perfect Torah sage Rabbi Avraham Ze'eviâ€¦ because he is humble and G-d fearing and because he knows me he honors me greatlyâ€¦ and day and night we spent togetherâ€¦".
This letter was written for Rabbi Ze'evi's second journey as emissary when the Chida was staying in Livorno, and he added his approbation to the emissary letter.
[2] pages. 32 cm. Good condition, folding marks. Stains.