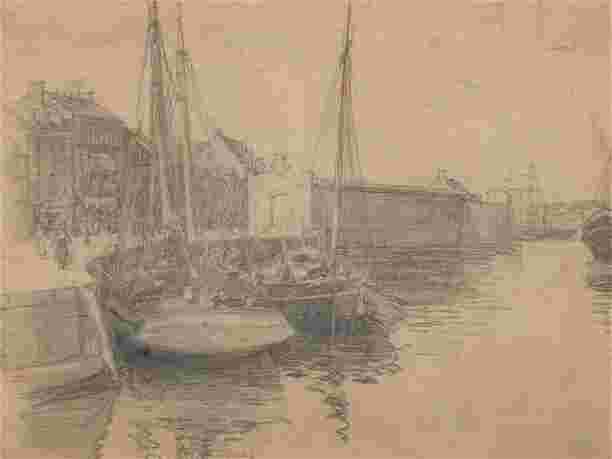 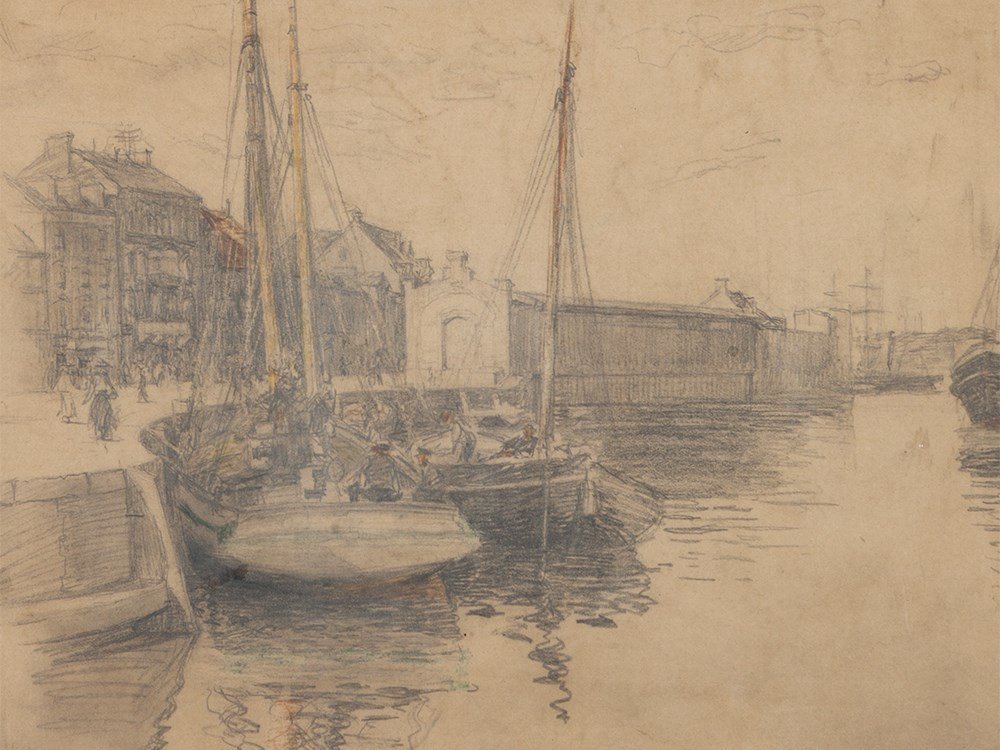 This delicate pencil drawing by the Dutch landscape painter Johan Barthold Jongkind was executed in 1886. The artist has depicted the hustle and bustle in a Dutch canal, in which to ships are moored for delivery and collection of goods. The fine lines as well as the impressive deal of details seem remarkable, as the artist had not seen his home country since his last visit in 1869. The artist was able to render the impressions and sceneries of landscape in his studio, though he probably had some sketches.

The work is in good condition considering its age. It is signed and dated ‘Jongkind 1886‘, lower right. The paper is slightly browned and mounted with adhesive stripes into a passe-partout. Pale humidity stains are visible in the area of the sky and the water. The drawing measures 23.2 cm in height and 29.3 cm in width. The simple wooden frame is gilded and sometimes shows tiny nicks with material loss. In addition, unobstrusive traces of inactive worm infestation can be detected. The height of the frame measures 39 cm und the width measures 45 cm.

The Dutch artist Johan Barthold Jongkind started his career in 1837 as a student of Andreas Schelfhout (1787-1870) at the Academy of Art in The Hague. While he was initially inspired by Dutch landscape painting of the 17th century, Jongkind apparently adopted new courses when he became a pupil of Eugène Isabey (1803-1886) in Paris in 1846. It was the time, when Jongkind met personalities such as Daubigny, Baudelaire, Nadar, Rousseau and Corot, who led him to combine the characteristics of historical Dutch landscape painting with the developments of contemporary French landscape painting. Despite his great successes at the Paris Salon, the artist was impaired by strong mental diseases, so that he eventually moved to the quiet areas of the Normandy in 1862. Here, he made acquaintance of Claude Monet (1840-1926) and Eugène Boudin (1824-1898), who introduced him to their plein-air painting. The watercolors of these years are executed with such a freshness of vision that Jongkind can be recognized as one of the early forerunners of the Impressionist movement. Today, his works are traded internationally and belong to famous collections such as the Musée d’Orsay in Paris.