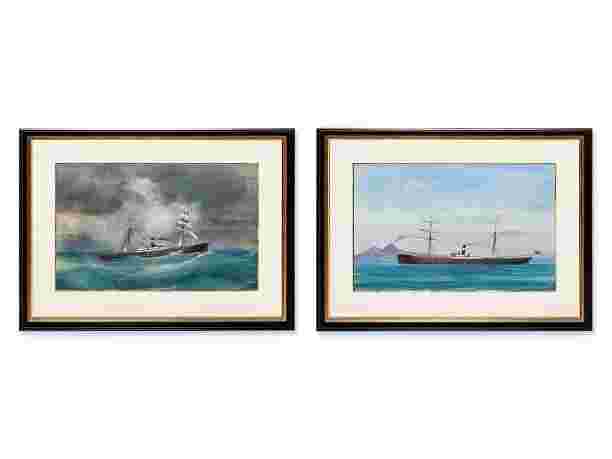 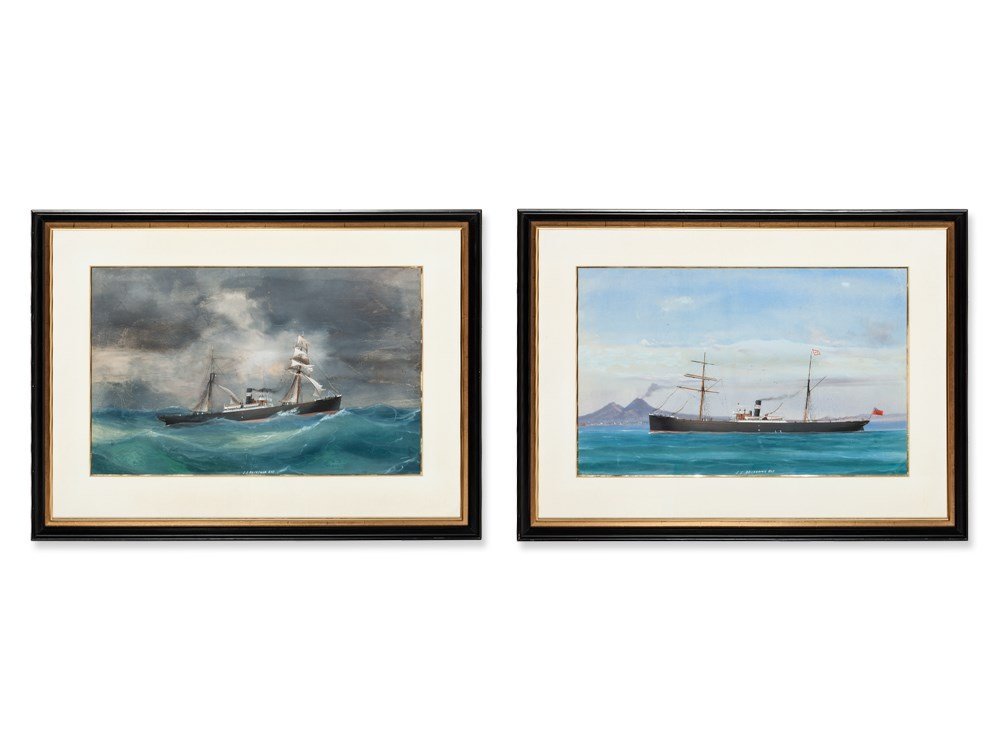 Gouache on paper
Italy, circa 1890
Workshop of Antonio De Simone (1851-1907) - Italian marine painter
Pair of captain’s paintings in a storm and on the coast of Naples
Each sheet inscribed lower center, ‘S. S. Boskenna Bay’
Overall dimensions, with frame: 65 x 89 cm, sheet size: 45 x 59 cm
Provenance: German private collection
Captain’s paintings were often depicted from the 18th to the early 20th century. They were mostly commissioned by captains, who used them as a souvenir. De Simone and his workshop were specialized in ship depictions in the port of Naples

The present gouaches were most likely executed in the workshop of the Italian marine painter Antonio De Simone (1851-1907), who was specialized in ship depictions in the port of Naples. They depict the SS Boskenna Bay, an English steamer, on the high seas, as well as in front of the harbor of Naples. The gouaches were probably celebrating the safe arrival of the ship to the harbor, after resisting a strong storm.

Both paintings are inscribed lower center, ‘S. S. Boskenna Bay’. The works are in visually good condition. In parts there are some touch ups and retouched scratches as well as a few small color losses. One sheet shows a retouched tear to the upper right edge. Due the technique the sheets are a little wavy. The sheets are matted. The gilded black wood frame has very few wear marks. The overall dimensions, with frame, are 65 x 89 cm. The sheet dimensions are 45 x 59 cm.

Antonio De Simone and his father Tommaso De Simone (c. 1805-1888) are among the most important Italian marine painters of their time. Antonio primarily worked in gouache, while Tommaso mainly painted in oil. Antonio specialized in ship depictions in the harbor of Naples. His clients were mostly the captains themselves. A characteristic element of Antonio De Simone’s ship paintings is the bright blue in the sky and sea. Works by Antonio De Simone were in great demand during his lifetime, especially among sailors. In recent years, there is again an increasing interest for his works in the international art market, as they are rare on the market. Simone representations of coastal headlands are among the most sought after works.

413 Followers
Get notifications from your favorite auctioneers.
As Seen On
Shop With Confidence
Since 2002, LiveAuctioneers has made exceptional items available for safe purchase in secure online auctions.
Popular Searches
Artists & Creators
Brands
Style Periods
Origins
Company
Winning
Selling
© 2002-2020 LiveAuctioneers. All Rights Reserved.Cookie PolicyTerms & ConditionsPrivacy Policy
This site is protected by reCAPTCHA and the Google Terms of Service and Privacy Policy apply.
BACK TO TOP