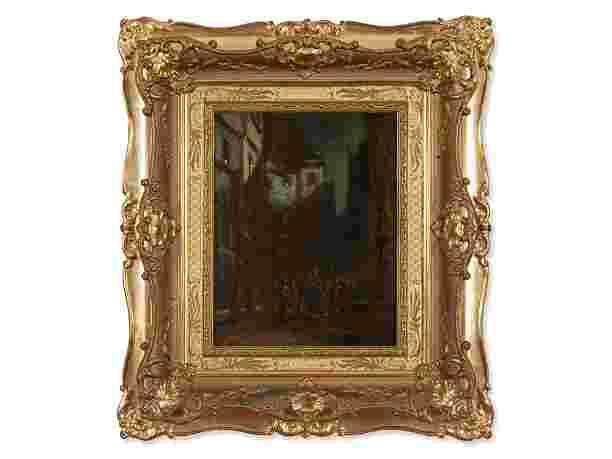 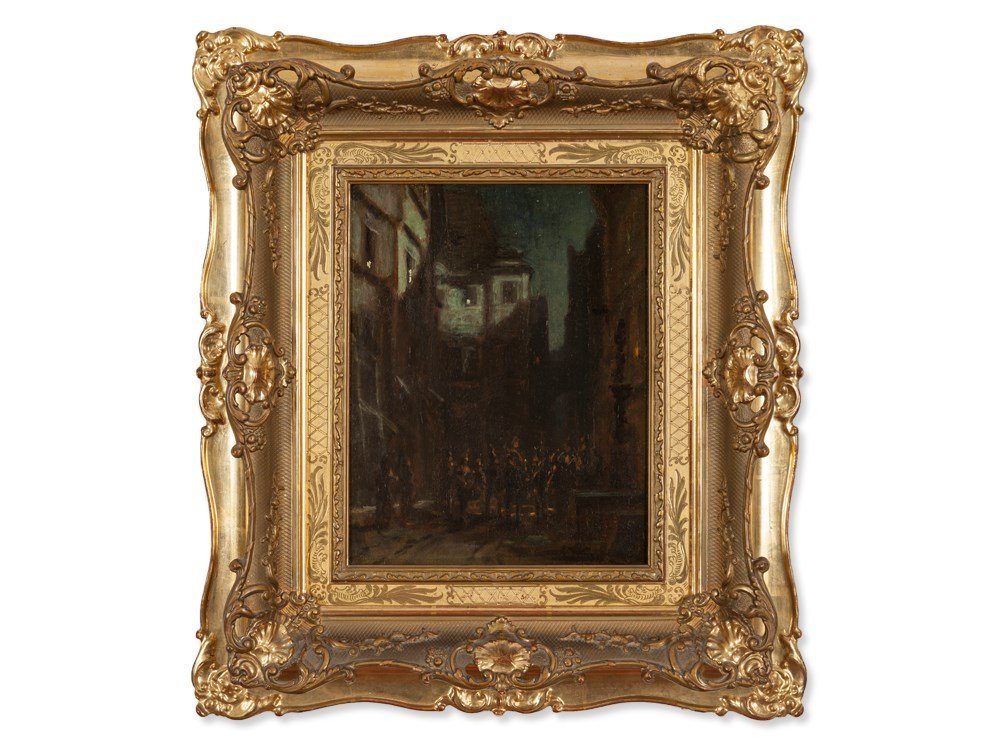 Carl Spitzweg created this painting entitled ‘Serenade’ crica 1870. Spitzweg depicted the Serenade subject several times in his later period, preferably capturing it in the moonlight. The present night piece shows a view of an old town, where a marching band walks up to the direction of the viewer. On the sides are located facades, and on the left are visible some pedestrians. In the right foreground is depicted a fountain shown with standing figure; behind is flickering the light from a room. A house with bay in the background is brightly illuminated by the glow of the moon. To the far right opens the alley and the view of a blue-gray night sky.

In this work, Spitzweg has used the characteristic elements of his serenade pieces: the night sky, the moonlit bay, the illuminated room, the fountain. However, the composition is rendered sketchy, which enhances the painting with a special charm.

The provenance of the work is well documented: It was sold on 19 October 1897 from a Viennese private collection in the Berlin gallery Lepke. In October 1919, in was sold from the Zurich Collection Henneberg in the gallery Neupert, Zurich. The last passage on the market was in the 1970s, when purchased by a German collector, and thence by descent.

The painting is signed with monogram lower right with the rhombus and ‘S’. The painting is in good condition, showing slight framing marks, craquelure and a few smaller restorations, especially along the edges and in the architectural backdrop. The ornate, gilded stucco frame is also in good condition, displaying minimal wear. The gilding has partly been renewed. The overall dimensions with frame are 48 x 42.5 cm, the panel measuring 27.5 x 21.8 cm.

Carl Spitzweg studied pharmacy, botany and chemistry at the University of Munich. Before he began teaching himself painting, he worked as a pharmacist until 1833. In 1835, he became a member of the Munich Kunstverein. This was followed by extensive travels through Europe. From 1844, he worked for the ‘Flying Papers’, which were fitted with his humorous drawings.

Spitzweg belongs to the late Romantic Movement. Whilst the early works still show the influence of the Biedermeier, the painting style loosened up in his later work, and came close to Impressionism. The artist’s keen sense of coloring derived possibly from his training in pharmacy.

In addition to landscapes, Spitzweg’s frequently depicted characters from the Biedermeier petty bourgeoisie, and satirical illustrations of quirky characters. Works by Carl Spitzweg achieve very high prices on the international auction market. They are on display in major collections, such as the Neue Pinakothek Munich, the Courtauld Institute of Art in London, the Germanic National Museum in Nuremberg, and the Wallraf-Richartz Museum in Cologne.