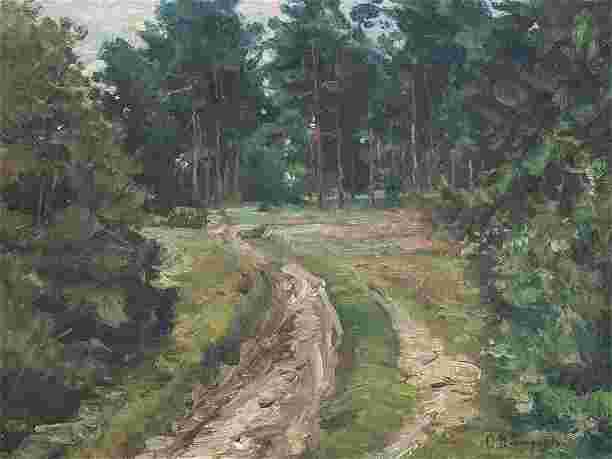 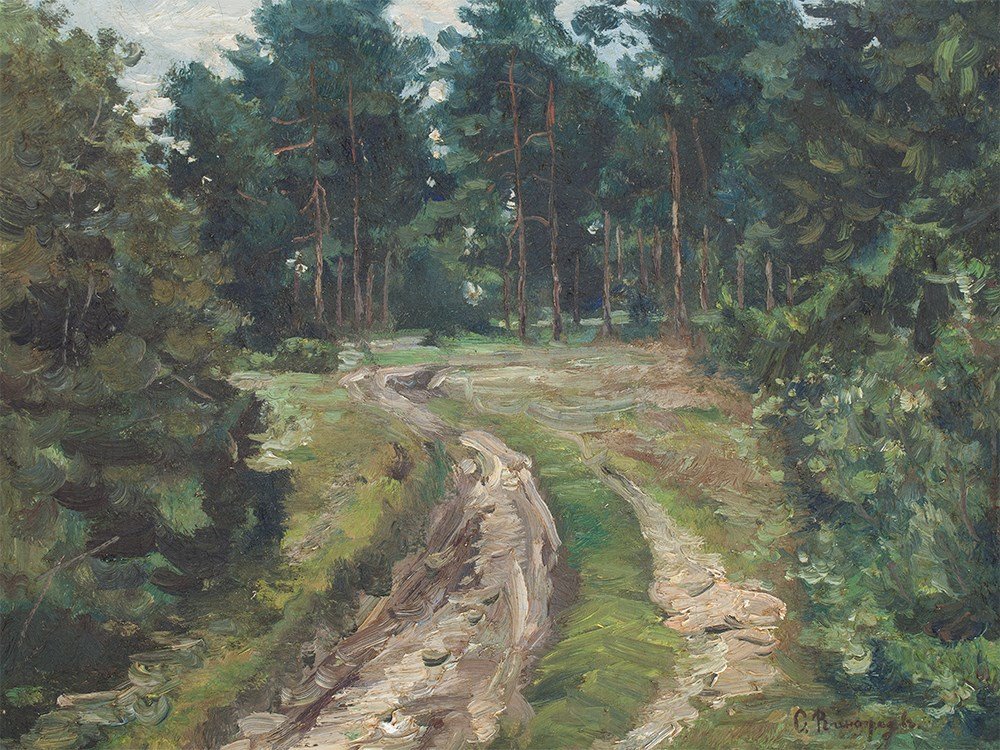 This oil painting was created by the Russian painter Sergei Vinogradov Arsenievich around 1920. It can be considered an outdoor study, also known as ‘plein-air'. This work is characterized by its impasto paint application. The artist created here an appealing study that depicts a forest clearing in which the trees of the forest and the meadow are executed in various shades of green. The clearing is crossed by a bright, spontaneous and impasto painted deep rut meandering as a curved line through the forest. Vinogradov has created similar compositions with intricate paths in landscapes several times in different variations as it was one of his preferred motifs.

The oil painting is signed in Cyrillic script lower right ‘C. Vinogradov’. It shows slight age-related craquelure, the edges are slightly rubbed with fractional losses of color due to former framing. The subject as well as the edges with some small retouched spots (only visible under UV light). The unframed painting is otherwise overall in good condition. The dimensions are 46 x 56 cm.

Sergei Vinogradov is one of the most important Russian painters of his time, whose work is a vivid picture of the development of Russian ‘plein air’-painting in the first two decades of the 20th century. During the 1880s, he was influenced by his well-known teachers Vladimir Makovsky, Vasily Polenov, Illarion Pryanishnikov and later Bogdan Villevalde, thereby Vinogradov perfected the art of narrative in painting and developed a fresh perception and richness of color in the Russian genre painting. He achieved brilliant impressionistic effects in his paintings. Vinogradov was a co-founder and active member of the Union of Russian artists, who made an important contribution to the development of the Impressionist tradition and the contemporary realism painting. His works are held by the State Tretyakov Gallery and the State Russian Museum.

Due to the legal obligation for the resale royalty in the art market the following applies: As a result of its membership in the AV Kunst, Auctionata charges additionally to the hammer price the contribution to the AV Kunst of currently 2.1% of the revenues from the sale of fine arts and photographs pro rata towards the buyer. More information about royalty right in our T&C.

420 Followers
Get notifications from your favorite auctioneers.
As Seen On
Shop With Confidence
Since 2002, LiveAuctioneers has made exceptional items available for safe purchase in secure online auctions.
Popular Searches
Artists & Creators
Brands
Style Periods
Origins
Company
Winning
Selling
Â© 2002-2020 LiveAuctioneers. All Rights Reserved.Cookie PolicyTerms & ConditionsPrivacy Policy
This site is protected by reCAPTCHA and the Google Terms of Service and Privacy Policy apply.
BACK TO TOP