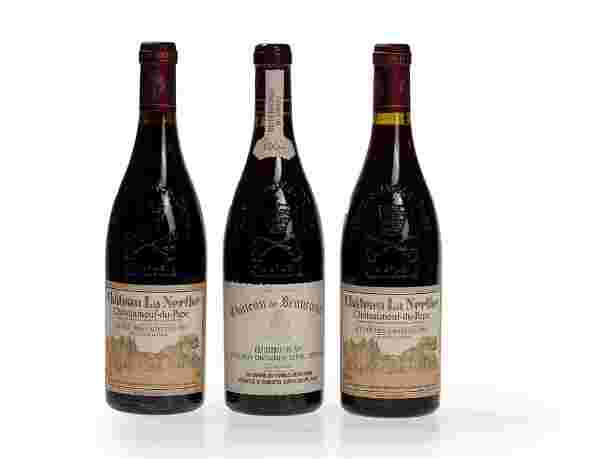 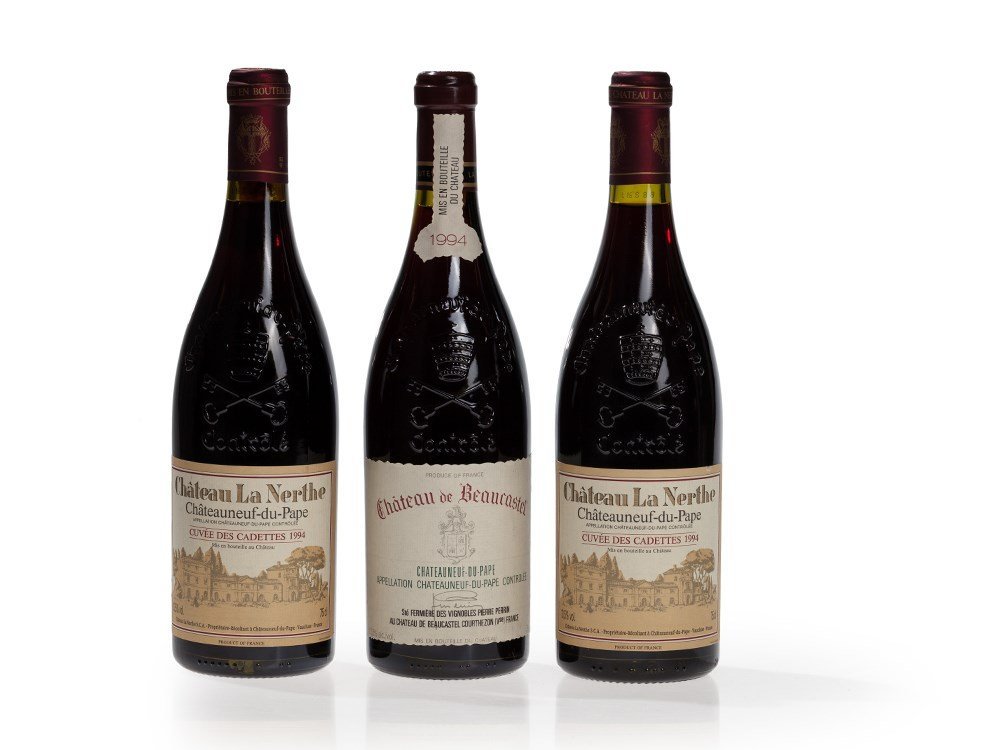 This lot comprises three bottles of red wine from the Châteauneuf-du-Pape appellation from the 1994 vintage, including one bottle of Châteauneuf du Beaucastel and two bottles of Château La Nerthe Cuvée des Cadettes.

The wine region on the Rhône is not only very old, it also produces some of the best wines that, despite their longevity, can also provide great enjoyment in their youth. After Lyon, the Rhône hurriedly descends to the south. Here, on the west bank, the Côte Rôtie wines are produced, while the Hermitage and Crozes-Hermitage appellations are situated on the east bank. In the northern reaches of the Rhône, Syrah is king. White wines are produced from Marsanne, Roussane and Viognier. The vines grow in mineral-rich, structure-giving floors consisting of weathered granite with feldspar, gneiss and mica. A completely different world, in terms of topography, viticulture and culture, is located in the southern Rhône valley: here, Mediterranean grape varieties like the red and white Grenache are at home. They dominate the Cuvées, which, like the Châteauneuf-du-Pape, is made from a dozen different grape varieties.

The fame of the Châteauneuf-du-Pape appellation on the southern part of the Rhône dates back to the former papal residence. Today, papal insignia such as the tiara and the Keys of Heaven can still be found on the bottles. The vines grow on pebble scree, galets, which accelerate grape maturity in the hot climate to produce full-bodied, opulent wines. It’s typical for red and white Châteauneuf-du-Pape to be made from a variety of accepted grape varieties, however the most important is Grenache, the soul of these wines.

1994 was an average vintage for Rhône wine, most winemakers were unlucky enough to pick their grapes in the rain. Those who began earlier were able to produce some great wines.

The fill levels are excellent (< 3 cm). Some labels are very slightly damaged. The capsules are in perfect condition.

420 Followers
Get notifications from your favorite auctioneers.
As Seen On
Shop With Confidence
Since 2002, LiveAuctioneers has made exceptional items available for safe purchase in secure online auctions.
Popular Searches
Artists & Creators
Brands
Style Periods
Origins
Company
Winning
Selling
Â© 2002-2020 LiveAuctioneers. All Rights Reserved.Cookie PolicyTerms & ConditionsPrivacy Policy
This site is protected by reCAPTCHA and the Google Terms of Service and Privacy Policy apply.
BACK TO TOP