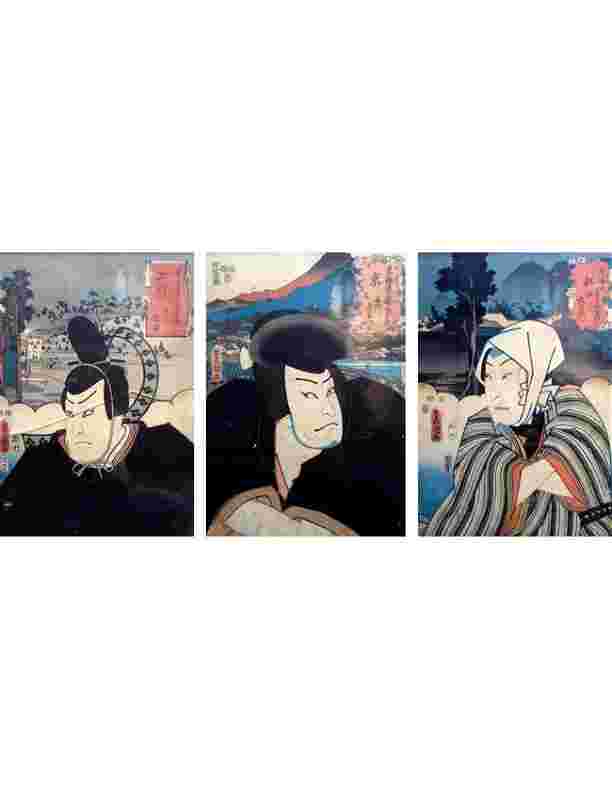 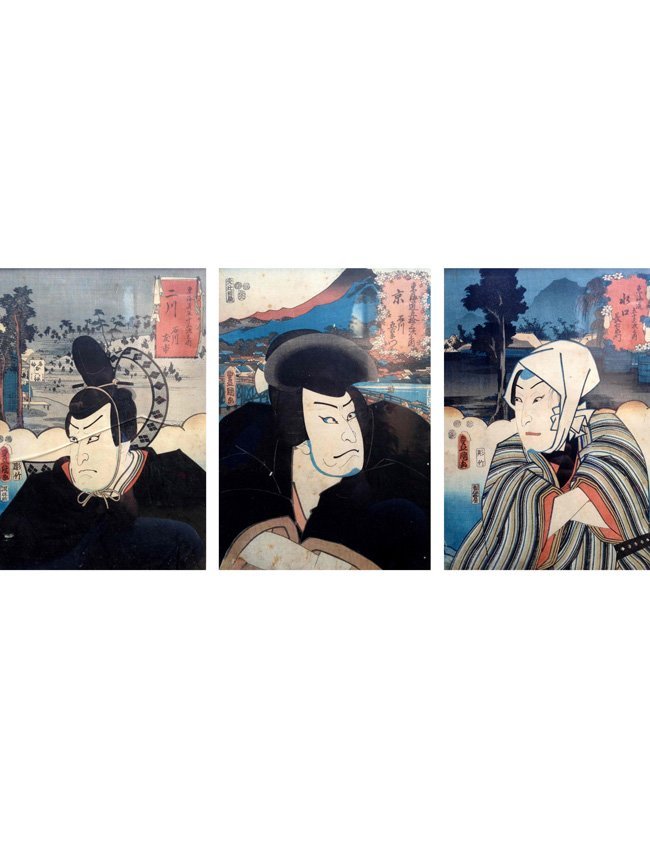 Three nineteenth century woodblock prints matted, framed, and sealed. The first is Kyo - Ishikawa Goemon. Station 55 on the Tokaido Road; the second of Futakawa; and the third is unidentified.

Condition: With some scattered light, foxing, consistent with age. Some wear to paint on frames and a crack in the glass of one frame.

Provenance: The prints were given to the present owner by her father-in-law over sixty years ago.

Prints of the Fifty-Three Stations of the Tokaido are a series of ukiyo-e woodcut prints created by Utagawa Hiroshige after his first travel along the Tokaido in 1832. It must be noted that these prints may not be from Hiroshige himself, but are inspired from the popular series. The Tokaido road, linking the shogun's capital of Edo, to the imperial one, Kyoto, was the main travel and transport artery of old Japan. It is also the most important of the "Five Roads", the five major roads of Japan, created during the Edo era to further strengthen the control of the central shogunate administration over the whole country. Even though the Hoeido edition is by far the best known, The Fifty-Three Stations of the Tokaido was such a popular subject that it led Hiroshige to create some 30 different series of woodcut prints on it, all very different one from the other by their size, their designs or even their number (some series include just a few prints). Hiroshige's series met with full success, not only in Japan, but later in Western countries. [Keywords: imperial, vintage, ink]

New York City, NY, USA
Get notifications from your favorite auctioneers.
As Seen On
Shop With Confidence
Since 2002, LiveAuctioneers has made exceptional items available for safe purchase in secure online auctions.
Popular Searches
Artists & Creators
Brands
Style Periods
Origins
Company
Winning
Selling
© 2002-2020 LiveAuctioneers. All Rights Reserved.Cookie PolicyTerms & ConditionsPrivacy Policy
This site is protected by reCAPTCHA and the Google Terms of Service and Privacy Policy apply.
BACK TO TOP