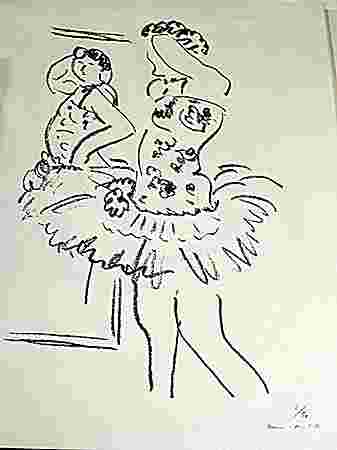 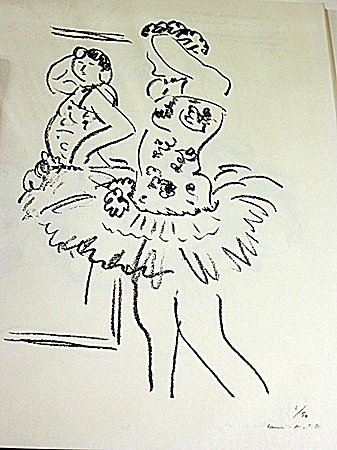 LITHOGRAPH BY HENRI MATISSE, BEARING THE SIGNATURE IN A LIMITED EDITION TITLED "DANSEUSE AU MIROIR", CIRCA 1927. Size Approx. 9 x 13 In. Matisse’s discovery of his true profession came about in an unusual manner. Following an attack of appendicitis, he began to paint in 1889, when his mother had brought him art supplies during the period of convalescence. He said later, “From the moment I held the box of colors in my hands, I knew this was my life. I threw myself into it like a beast that plunges towards the thing it loves.” Matisse’s mother was the first to advise her son not to adhere to the “rules” of art, but rather listen to his own emotions. Matisse was so committed to his art that he later extended a warning to his fiancée, Amélie Parayre, whom he later married: “I love you dearly, mademoiselle; but I shall always love painting more.” Matisse had discovered "a kind of paradise" as he later described it. His drastic change of profession deeply disappointed his father.
Two years later in 1891 Matisse returned to Paris to study art at the Académie Julian and became a student of William-Adolphe Bouguereau. After a discouraging year at the Académie Julian, he left in disgust at the overly perfectionist style of teaching there. Afterwards he trained with Gustave Moreau, an artist who nurtured more progressive leanings. In both studios, as was usual, students drew endless figure studies from life. From Bouguereau, he learned the fundamental lessons of classical painting. His one art-schooled technical standby, almost a fetish, was the plumb line. No matter how odd the angles in any Matisse, the verticals are usually dead true. Moreau was a painter who despised the "art du salon", so Matisse was destined, in a certain sense, to remain an "outcast" of the art world. He initially failed his drawing exam for admission to the École des Beaux-Arts, but persisted and was finally accepted.
Matisse began painting still-lives and landscapes in the traditional Flemish style, at which he achieved reasonable proficiency. Most of his early works employ a dark palette and tend to be gloomy. Chardin was one of Matisse's most admired painters having made four the French still-life master paintings in the Louvre. Although he executed numerous copies after the old masters he also studied contemporary art. His first experimentations earned him a reputation as the rebellious member of his studio classes.
In 1896, Matisse was elected as an associate member of the Société Nationale, which meant that each year he could show paintings at the Salon de la Société without having to submit them for review. In the same year he exhibited 5 paintings in the salon of the Société Nationale des Beaux-Arts, and the state bought two of his paintings. This was the first and almost only recognition he received in his native country during his lifetime. In 1897 and 1898, he visited the painter John Peter Russell on the island Belle Île off the coast of Brittany. Russell introduced him to Impressionism and to the work of Van Gogh who had been a good friend of Russell but was completely unknown at the time. Matisse's style changed completely, and he would later say "Russell was my teacher, and Russell explained color theory to me." Matisse also observed Russell's and other artists' stable marriages. This probably influenced him to find in Amélie Noellie Parayre, his future wife, his anchor.

Boulder, CO, USA
35 Followers
Get notifications from your favorite auctioneers.
As Seen On
Shop With Confidence
Since 2002, LiveAuctioneers has made exceptional items available for safe purchase in secure online auctions.
Popular Searches
Artists & Creators
Brands
Style Periods
Origins
Company
Winning
Selling
Â© 2002-2020 LiveAuctioneers. All Rights Reserved.Cookie PolicyTerms & ConditionsPrivacy Policy
This site is protected by reCAPTCHA and the Google Terms of Service and Privacy Policy apply.
BACK TO TOP