Carboniferous to Eocene Period, 360-50 million years BP. A mixed group of over twenty fossil and mineral specimens of

A mixed group of around thirty samples, mostly minerals but including some fossils; some sealed in glass phials, others in

A substantial specimen of scalenohedral calcite crystals on a heavy matrix. 1.3 kg, 13.5cm (5 1/4"). Property of a Surrey

A substantial calcite specimen of red-brown colour. 963 grams, 12.8cm (5"). Property of a Surrey lady; previously in the

A mixed group of mineral specimens from various locations around the globe, mostly held in polythene bags, some accompanied

A mixed group of circa twenty mineral specimens, including examples housed in miniature plastic display cases and 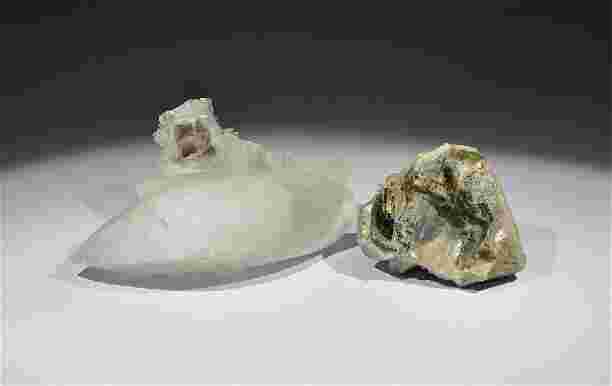 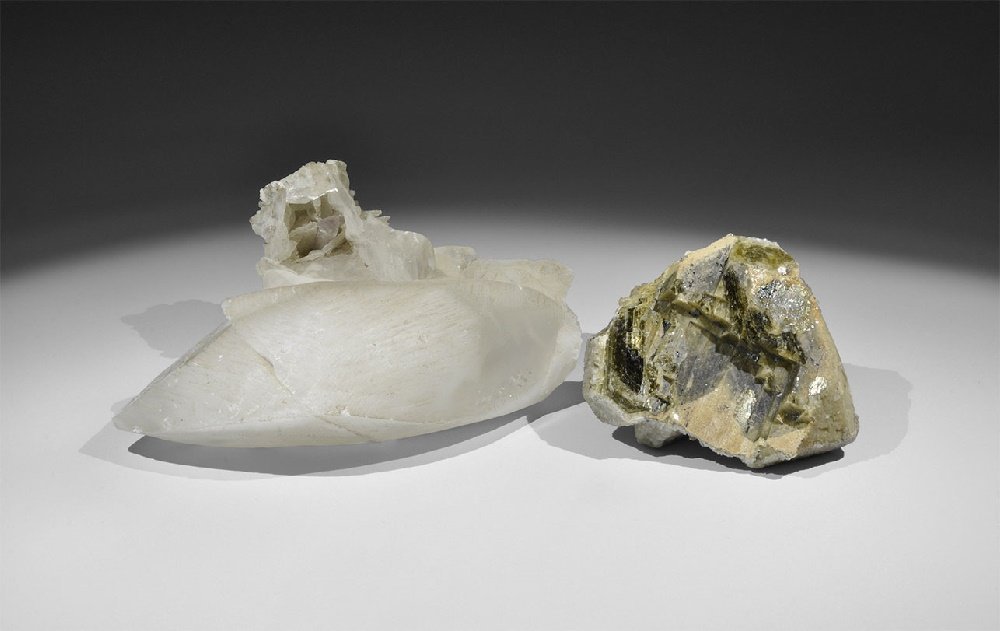 A group of two unusual forms of calcite: a large, flattened scalenohedral crystal naturally etched to show crystallisation phases, with a portion of one termination removed to show internal structure accompanied by a small intergrown amethyst crystal; two intergrown, shortened scalenohedral crystals overgrown with tiny calcites and pyrites; all in old white card trays, from the Gregory, Bottley, and Lloyd collection. Cf. Bonewitz, Dr. Ronald Louis Smithsonian Rock and Gem, (2008), p.177. 758 grams total, 78-145mm (trays: 10-15cm) (3 - 6"). From a historic ‘Victorian Museum’ collection; from the stock of Gregory, Bottley & Lloyd (1981-2014); formerly with Gregory, Bottley & Co. (1932-1981) and previously with J. R. Gregory & Co. (1898-1932); originally in the collection of the famous James Reynolds Gregory (1858-1898). This item is part of a historic collection of fossils and minerals which has recently been reviewed by leading geological expert Dr. Ronald Bonewitz. James Reynolds Gregory (1832-1899) was one of the principal London mineral and fossil dealers during the second half of the 19th century. The company he founded was one of the longest surviving geological suppliers in the world, second only to Kranz of Germany. In 1858 James Gregory established his business selling polished stones, minerals and fossils from premises in King William Street. A few years later he moved to premises in Golden Square, Soho. He won prize medals at exhibitions in Paris (1867), Sydney (1879) and London (1862 and 1883). He also formed a superb collection of meteorites, which was later sold by his sons to the Natural History Museum, London. On the death of his father in 1899 Albert Gregory took over the business, dealing from premises in Kensington, then 30 Old Church Street in Chelsea. He eventually sold the company in 1932 to Percy Bottley, and after his death in 1982 the premises were sold. The company was then acquired by Brian Lloyd who had started the Natural History sales at Sotheby's before dealing from his own premises in Pall Mall. Gregory, Bottley & Lloyd, as it became known, traded from Ricket Street and later Seagrave Road in Fulham. In 2008 the business and all of the stock and Victorian cabinets were moved out of London to Walmer in Kent. On the eventual retirement of Brian and Mary Lloyd in 2014, with none of their family interested in taking over the business, the stock was sold and is now dispersed. [2, No Reserve]

London, UK
136 Reviews
3,380 Followers
Get notifications from your favorite auctioneers.
As Seen On
Shop With Confidence
Since 2002, LiveAuctioneers has made exceptional items available for safe purchase in secure online auctions.
Popular Searches
Artists & Creators
Brands
Style Periods
Origins
Company
Winning
Selling
© 2002-2020 LiveAuctioneers. All Rights Reserved.Cookie PolicyTerms & ConditionsPrivacy Policy
This site is protected by reCAPTCHA and the Google Terms of Service and Privacy Policy apply.
BACK TO TOP