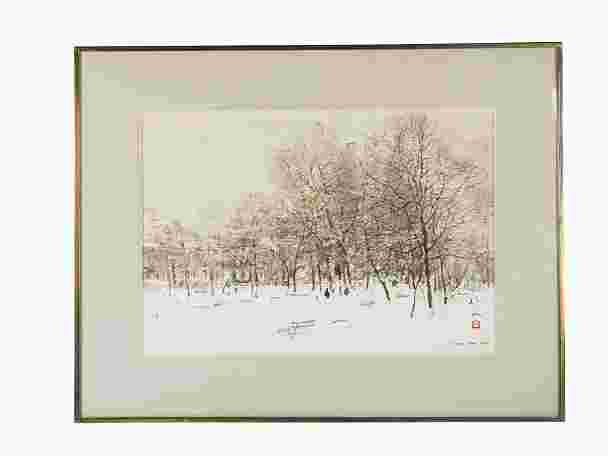 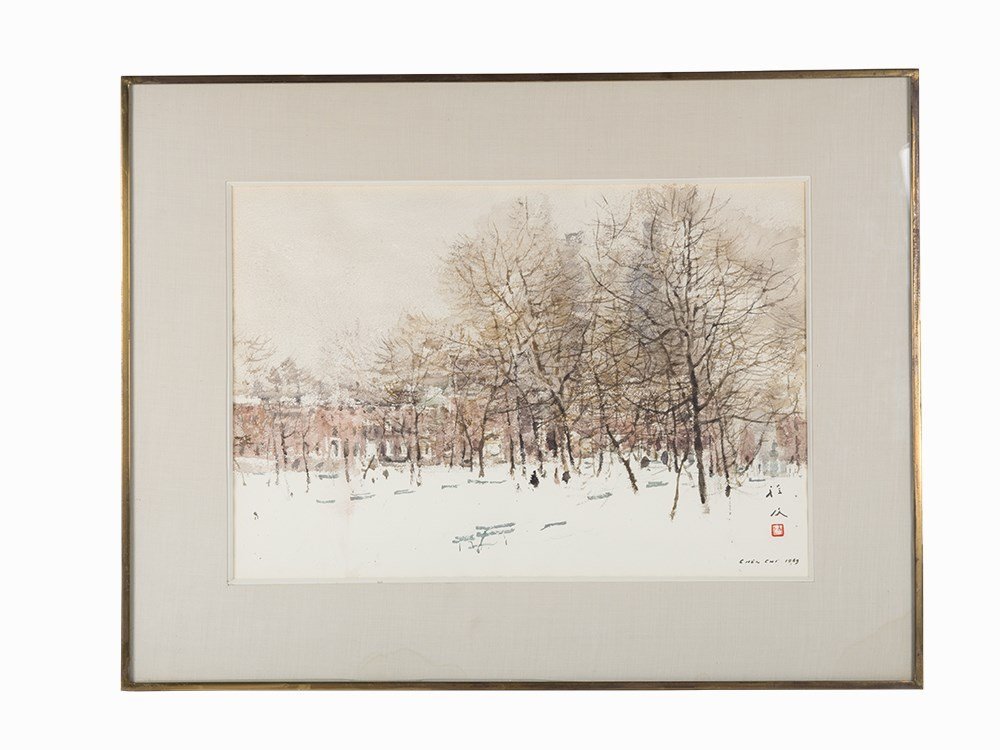 This watercolor by Chen Chi of a winter landscape blends Chi’s Eastern heritage with his Western training. Depicting trees in the snow set against a row of buildings, the artist creates a calm atmosphere through the muted color palette.

Signed “Chen Chi” and bearing the Chinese stamp, this work is inscribed in Chinese on the lower right. It measures 15 1/4 x 22 inches and was painted in 1969. This work is double-sided, and taped along the upper edge. There is slight mat burn along the 1/4 inch edge, but otherwise appears in overall good condition.

Born in China in 1912, Chen Chi entered art school in 1931. As a student, Chen was a member of the White Swan Art Club, a group of students interested in Western materials, artists and techniques, particularly of the Impressionists and Post-Impressionists. Unlike other students, Chen did not completely abandon the traditions of Chinese art, instead he created a unique blend of Eastern and Western cultures. His first solo show was in Shanghai in 1940, and since then his work has been exhibited at the Brooklyn Museum, Corcoran Gallery, Grand Central Art Galleries, Metropolitan Museum in New York, National Academy of Design, and the Whitney Museum of American Art. In 1947 he came to the United States on a cultural exchange program, and became a citizen in 1964. His illustrations appeared in major American magazines, including the Ford Motor Company Magazine, Colliers, Sports Illustrated, and Horizon.

121 Followers
Get notifications from your favorite auctioneers.
As Seen On
Shop With Confidence
Since 2002, LiveAuctioneers has made exceptional items available for safe purchase in secure online auctions.
Popular Searches
Artists & Creators
Brands
Style Periods
Origins
Company
Winning
Selling
© 2002-2020 LiveAuctioneers. All Rights Reserved.Cookie PolicyTerms & ConditionsPrivacy Policy
This site is protected by reCAPTCHA and the Google Terms of Service and Privacy Policy apply.
BACK TO TOP