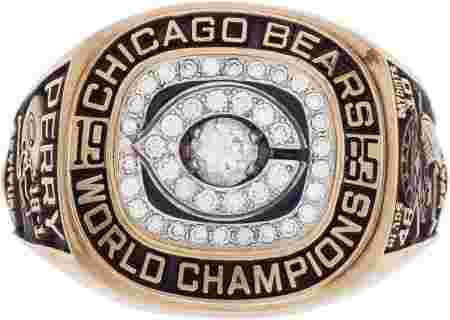 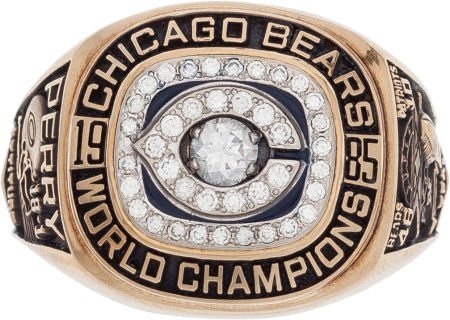 1985 Chicago Bears Super Bowl XX Championship Ring Presented to William "Refrigerator" Perry. Everybody remembers the Fridge's thundering one-yard rush to paydirt in the twentieth edition of American sports' greatest showcase, but few know that the bizarre play-calling was intended to be a middle finger from legendary Bears coach Mike Ditka to his defensive coordinator Buddy Ryan. The massive rookie out of Clemson had been the Bears' first-round selection that year's NFL Draft, a fact that incensed Ryan, who saw the gargantuan tackle as more circus freak than athlete. In point of fact, Perry was extraordinarily athletic for his size, able to carry his 300+ pounds to an eleven-second 100 meters, and to perform 360-degree dunks on a regulation basket. So throughout that debut season, the Fridge was used as a pawn in the Ditka/Ryan power struggle. It was Ditka who had the last laugh.

Here's the proof, the largest NFL Championship ring ever produced, estimated at a size twenty-five, though no measuring tool large enough to confirm this figure exists. While it is widely known in the hobby that the ring was rather widely reproduced due to its crowd-pleasing absurdity, we can confirm definitively that this is the one and only original presented to Perry for his part in "shuffling" to Super Bowl XX victory along with Walter Payton, Jim McMahon and Mike Singletary.

The face of the ring is awash in genuine diamonds which allow just a hint of the navy blue stone beneath to peek through. Raised text at the perimeter trumpets the achievement: "1985 Chicago Bears World Champions."  Left shank announces "Perry" above a figural helmet and text reporting, "16-1, GSH, Attitude."
Right shank reports the lopsided score, "Bears 46 Patriots 10" above the logos of Super Bowl XX and the NFC, and a figural Lombardi Trophy.

Interior band is free of any stamping, a key factor in determining originality as Josten's workers have confirmed that the massive size forced the sacrifice of their standard maker's mark. Our jewelry department confirms, however, that the construction is ten karat (10k) gold.