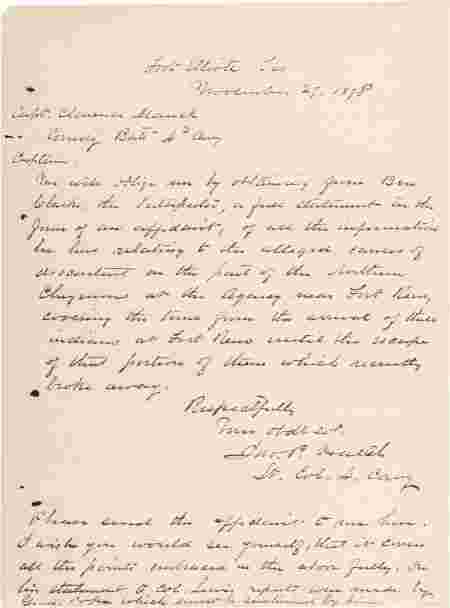 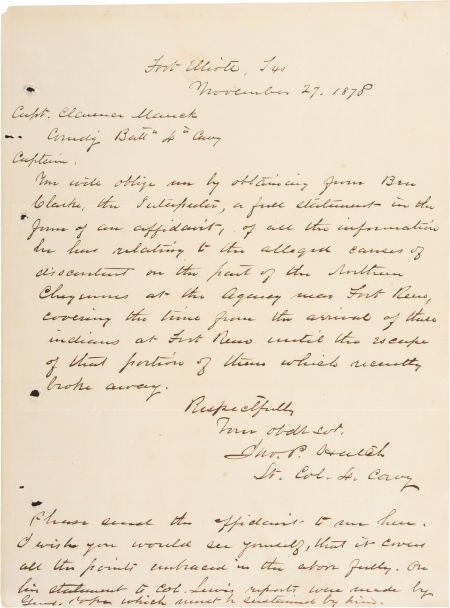 1878 U.S. Cavalry Document Regarding the Famous "Northern Cheyenne Exodus." Following Little Big Horn the tribes scattered, some captured or turning themselves in quickly, and some remaining at large. Dull Knife's band, along with that of Little Wolf and several others, surrendered at Fort Robinson. Under the terms of the 1868 Fort Laramie Treaty (which both chiefs had signed) they expected to live on a reservation together with the Sioux. But the army ordered them moved to Fort Reno to join Southern Cheyenne held there.

However, conditions were very harsh at Fort Reno, in September 1878 approximately three hundred men, women and children left the reservations under their Chiefs. For six weeks they were pursued by soldiers, with skirmishes resulting in casualties on both sides. The bands separated, with Dull Knife leading his group toward the Red Cloud Agency at Fort Robinson, where they planned to surrender. When he learned that the Agency had been moved to Pine Ridge, Dull Knife decided to proceed to Fort Robinson.

At the Fort they were temporarily housed in a barracks, awaiting what they believed could be relocation to Pine Ridge. But instead the army ordered them back to the Southern Cheyenne reservation. When they refused, the barracks doors were locked and bars placed over the windows. The prisoners received no rations or fuel to heat the building during cold January weather.

While the band had been disarmed when they came in, a number of guns were disassembled and hidden. These were now brought out, and on January 9th Dull Knife's people attempted a desperate escape. Many were killed in what would come to be known as the Fort Robinson Massacre, and many more were killed as those who escaped were run down. However Dull Knife and a small party managed to reach Pine Ridge. Months later remaining Cheyenne were finally released from Fort Robinson and permitted to move to Fort Keogh, where Little Wolf's band had ended up. Several of the escapees were tried for murder because of depredations against white civilians during their long flight from the army. Thus ended one of the most infamous chapters in the treatment of Plains tribes during the Indian Wars.

The army ordered an investigation of the affair, and the November 27, 1878 manuscript letter offered here was sent by Colonel John Porter Hatch of the 4th Cavalry to a captain under his command. He instructs the officer to "obtain from Ben Clarke, the interpreter, a full statement in the form of an affidavit, of all the information he has related to the alleged causes of discontent on the part of the Northern Cheyenne at the Agency near Fort Reno, covering the time from the arrival of these Indians at Fort Reno until the escape of that portion of them which recently broke away."

Hatch's post-script is very significant, as he asks the captain to "see yourself, that it covers all the points embraced in the above folly. On his statement to Col. Lewis reports were bade by Genl. (illegible) which must be sustained by him."

A rare document in excellent condition. 7.5" x 10". Four small hole along left edge from placing in a binder.

13,167 Followers
Get notifications from your favorite auctioneers.
As Seen On
Shop With Confidence
Since 2002, LiveAuctioneers has made exceptional items available for safe purchase in secure online auctions.
Popular Searches
Artists & Creators
Brands
Style Periods
Origins
Company
Winning
Selling
Â© 2002-2020 LiveAuctioneers. All Rights Reserved.Cookie PolicyTerms & ConditionsPrivacy Policy
This site is protected by reCAPTCHA and the Google Terms of Service and Privacy Policy apply.
BACK TO TOP