A pair of wall plates, Rosenthal, Studio-Line, 1985/86, designed by BjÃ¶rn Wiinblad, on the reverse, from the 'Asymmetria' 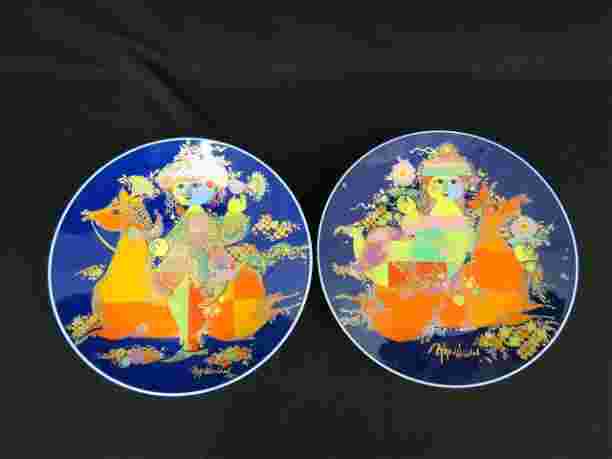 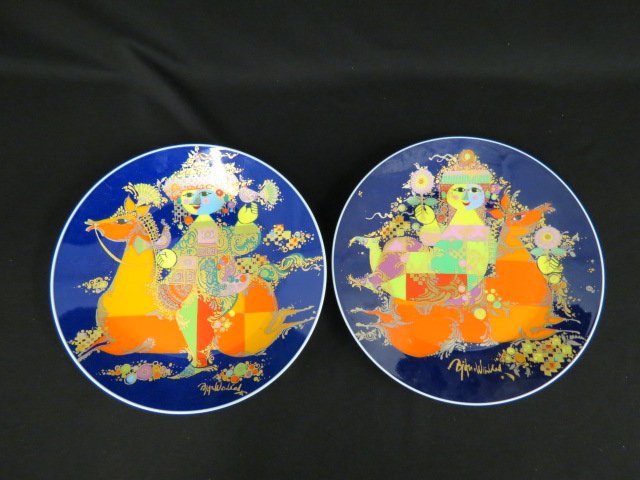 Chargers, modernist horse & riders on cobalt, 13", excellent...Bjørn Wiinblad (20 September 1918 - 8 June 2006), was a Danish painter, designer and artist in ceramics, silver, bronze, textiles, and graphics. His work has been exhibited in Europe, in the United States of America first in 1954 and in Japan, Australia and Canada in 1968.He was attached to the United States Embassy in Paris in 1947 as a poster designer. Later his posters illustrated Copenhagen's famous Tivoli Gardens and many other activities in Denmark, as well as the Olympic Games for the Handicapped at Seoul, the New World Symphony Orchestra academy in Miami, and the Royal Danish Ballet at the Metropolitan Opera House, all in 1988. His textile work was used for costumes for numerous ballets and stage presentations.Characteristics of Wiinblad's work include whimsical round-faced people, dressed in vaguely 19th-century costume. They are often surrounded by natural elements: twining vines, floral wreaths, and fantastical trees. When Wiinblad employed color, he did so with great assurance. His colors are saturated and strong--sometimes almost psychedelic--and are often supplemented with metallic gold or silver.Wiinblad illustrated the work of his fellow Dane, Hans Christian Andersen, when he took on the task of providing the artwork for The Swineherd, which won an award from the American Library Association. Wiinblad's "swineherd" illustrations were turned into a short animated film in 1986.Wiinblad was an important designer for the Rosenthal porcelain company. His most popular Rosenthal dinnerware design, Romance (Romanze), was a typical Wiinblad design in terms of its high level of fine decorative detail. Starting in 1971, he also designed an annual commemorative Christmas plate for Rosenthal. Wiinblad also designed ceramic pieces for Nymolle, a Danish pottery.Among the museums with Wiinblad's work in their collections are the Victoria and Albert Museum in London; the Museum of Modern Art in New York; and Stockholm's National Museum. His large ceramics and tapestries have been used for hotel decorations in Japan and the United States; for example, he was commissioned by developer Trammell Crow to design five massive Scheherazade tapestries for the Dallas International Apparel Mart, where they were displayed from 1973 until the building was closed in 2004.Wiinblad was named Man of the Year in New York in 1985 and was awarded the American-Scandinavian Foundation's Cultural Prize of 1995.Source:"Bjorn Wiinblad", Wikipedia, http://en.wikipedia.org/wiki/Bj%C3%B8rn_Wiinblad (Accessed 6/10/2013)