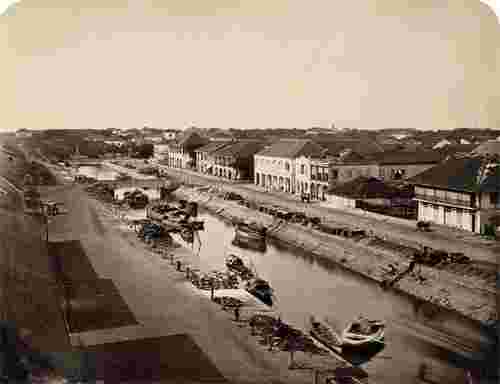 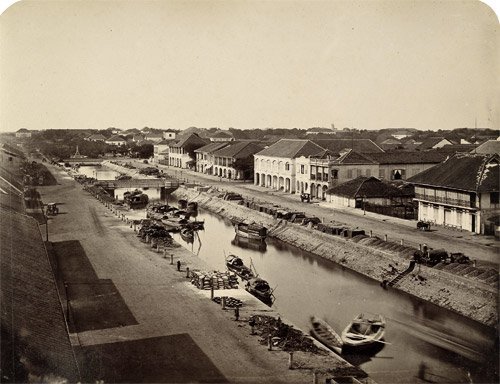 Views of Indochina: Chochin China, Tonkin, Siam, Cambodia and Angkor Wat. 1866/68. Circa 345 albumen prints, some with arched top. Various sizes, including circa 59 large-format prints (between 21 x 28 cm and 25 x 32 cm), circa 115 medium-sized prints (between 17 x 12 cm and 16 x 23 cm) and circa 177 carte-de-visite format as well as 4 panoramic views (between circa 22 x83 cm, 21 x 61,5 cm and 16,5 x 45, 5 cm). Some of the larger format prints with photographer's signature in the negative in lower corners, flush-mounted to album boards (foxing, soiled and time-stained in edges), some annotated in pencil below the images and all Angkor Wat (61) images with printed title labels mounted below the images on the mount, bound in contemporary dark brown half leather album (edges and covers rubbed, damaged spine, moisture damage).
The French photographer Emile Gsell worked in Southeast Asia and was the first photographer to be based in Saigon. He participated in at least three scientific expeditions and his images of Angkor Wat are some of the earliest of that site. The first page in the album starts with a very interesting image of a collection of circa 120 cartes-de-visite portraits and views by Gsell himself with his calling card Gsell Photographie, Saigon at the center. This is an important source for identifying a part of Gsell's work in Indochina and many of these images have previously been listed as being by an unknown photographer. Several views and a large panorama of Saigon harbor, a three mast ship in the dock, the Palace of the French governor in Saigon and views of other early colonial buildings of Indochina follow. Many high ranking officials, priests, theater groups and soldiers are also shown as well as temples and monuments, small settlements and villages of natives. Also included are large-format group portraits with the governor (?), a rare photograph of a court scene, early views of Hanoi and Pnom Penh, the Queen and King Norodom of Cambodia, temple musicians and dancers of Cambodia as well as the Royal Palace. The album concludes with a series of early views of Angkor Wat. An exquisite and exceptional album; the high quality of the prints, the rich tones and very good condition makes this an extremely rare and complete album in both its artistic and documentary character. - Some prints slightly faded, especially in edges and/or with light glue stains, some with stronger creases, most in very good to excellent condition and with strong rich brown tones.

Berlin, DE
150 Followers
Get notifications from your favorite auctioneers.
As Seen On
Shop With Confidence
Since 2002, LiveAuctioneers has made exceptional items available for safe purchase in secure online auctions.
Popular Searches
Artists & Creators
Brands
Style Periods
Origins
Company
Winning
Selling
© 2002-2020 LiveAuctioneers. All Rights Reserved.Cookie PolicyTerms & ConditionsPrivacy Policy
This site is protected by reCAPTCHA and the Google Terms of Service and Privacy Policy apply.
BACK TO TOP