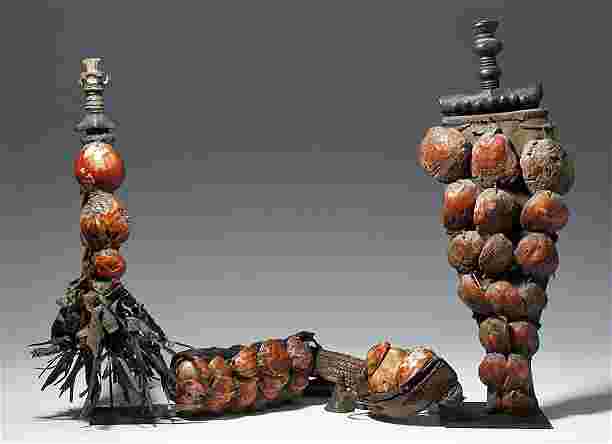 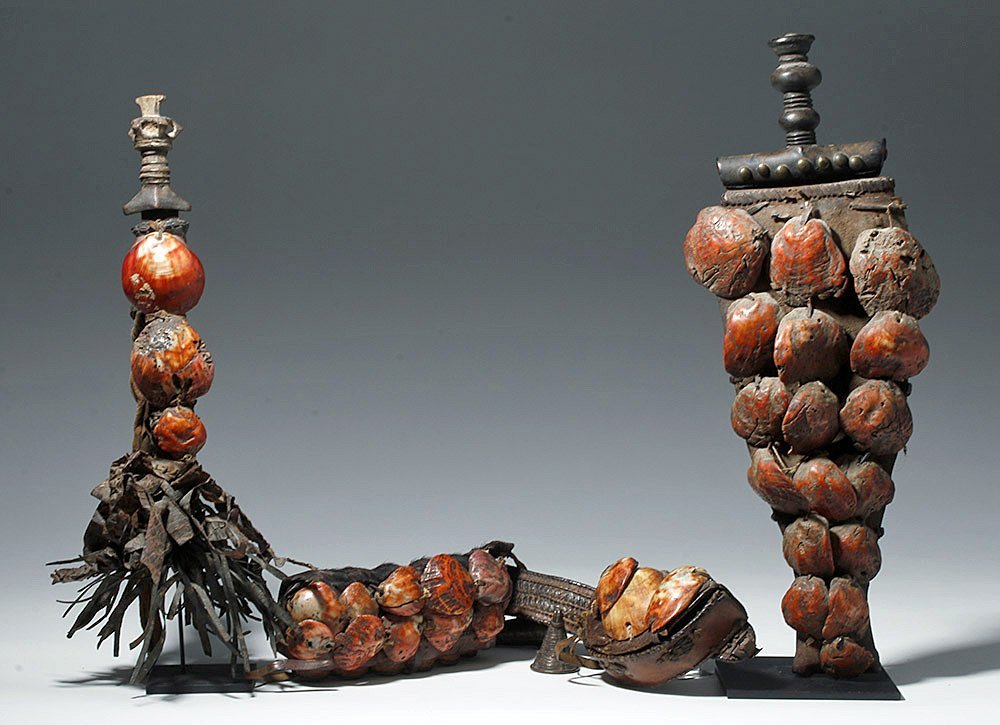 West Africa, Ghana, Ashanti, ca. 19th to early 20th century CE. An impressive ensemble from the royal treasury of the Ashanti, including an ammunition belt (called "ntoa") and two iron knives (called "sepo") with finely executed leather sheaths and beautifully carved wooden handles. The larger sepo's handle is also adorned with brass tacks, and its leather sheath boasts large red shells attached with leather cords; the smaller knife's sheath boasts python skins, red shells, and some woven cotton fabric. This ensemble would have been worn either around the waist or diagonally across the chest. Such palace art of the Ashanti kingdom was created to signify noble status and prestige, proclaiming the wealth and vitality of the Asantehne (king) and his kingdom - in short to visually validate his high status. The ammunition belt or ntoa carries two pouches, one to hold the shot, the other to hold uniformly carved wood cylinders that would have contained pre-measured amounts of powder. Knives or sepo like these were thrust through the cheeks of captives to prevent them from swearing oaths that would have maligned their captors. The red shells adorning this this set carry strong iconographic symbolism as they were believed to protect against lightning bolts or "Nyame akuma" as well as gunfire, as the noise and flash of firearms and lightning were commonly associated with one another. Being quite valuable, the shells also served as insignia of high rank and status. Beyond this, the knives were handsomely decorated with python skin which also symbolized the elite status of the owner as the achievements of the warrior were linked to the might and power of the python. An incredibly rare example of Ashanti art from the royal treasury, replete with the splendor and prestige of royalty status. Size: belt measures 25" L (63.5 cm); larger knife measures 18.5"L (47 cm); smaller measures 17" L (43.2 cm)

One leather tie missing from one shell on larger knife sheath. Minor wear to back of smaller knife sheath and fabric. Overall quite excellent.