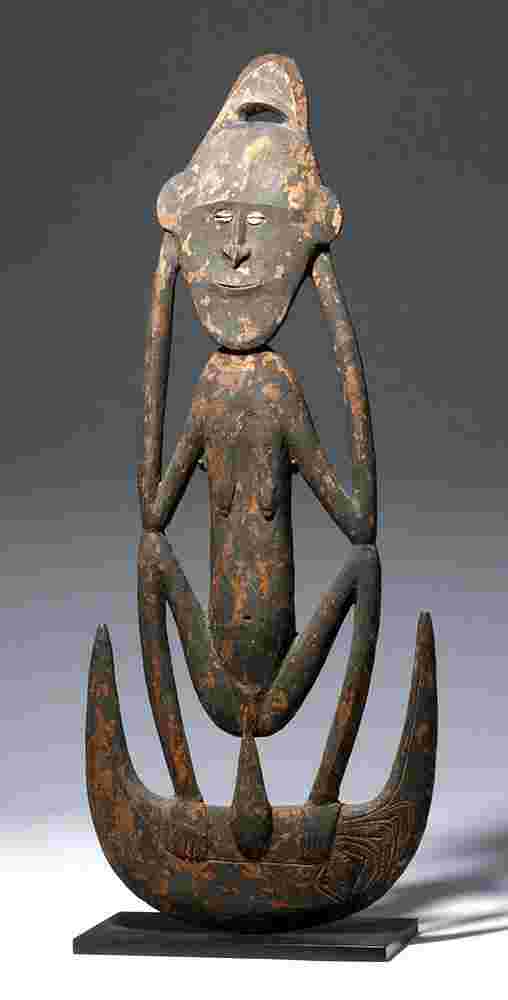 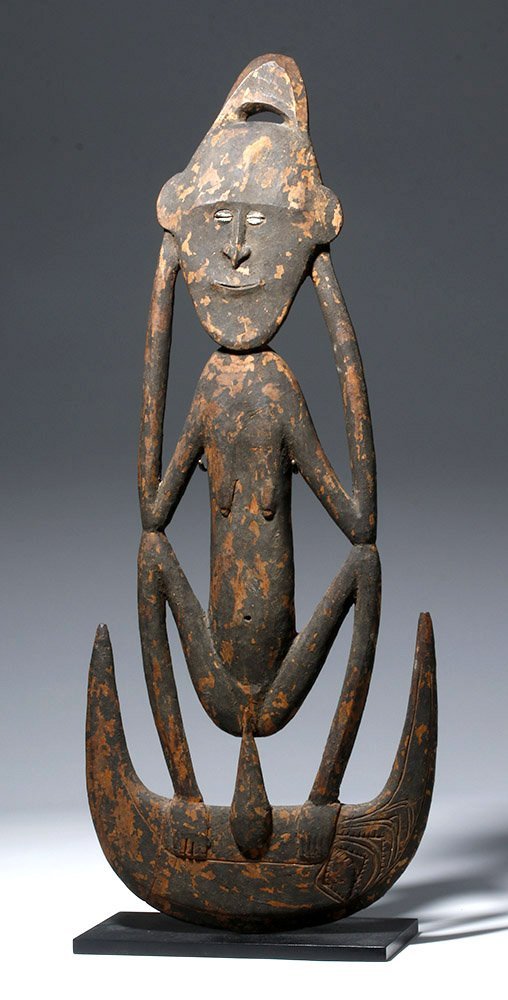 Oceania, Papua New Guinea, Middle Sepik River, Iatmul people, ca. late 19th to early 20th century CE. A hand carved female ancestral figure basket hook with an anchor form at the base for suspending baskets of food, clothing, or other items. This example may represent waken, an Iatmul supernatural being that would be consulted before a hunting expedition or raid. The impressive figural form delineated with a characteristically elongated head, a concave visage comprised of an overhanging brow, inset cowrie shell eyes, straight nose, cup-shaped ears, and subtle smile. She is depicted in a squatting pose with her hands placed behind her head and an extension at her genitalia. The anchor is incised with what appears to be an open mouthed fish, quite apropos given that this hook was designed to suspend and safeguard food. Painted with chocolate brown organic pigment that has flaked a bit revealing the red tinged wood beneath - a rather pleasing effect. Custom stand. Size: 11" W x 27.75" H (27.9 cm x 70.5 cm)

A very similar example at the Metropolitan Museum of Art in New York is described as follows, "Iatmul suspension hooks have both utilitarian and ceremonial functions. Suspended from the rafters by a cord, they are used to safeguard food, clothing, and other items, which are placed in baskets or string bags and hung from the hook-shaped prongs at the base to keep them out of reach of vermin. Most hooks are adorned with representations of ancestral spirits and totemic animals associated with the owner’s clan. In the past, some suspension hooks, especially those representing waken, the most powerful Iatmul supernatural beings, served as sacred images through which the supernatural beings they depicted could be consulted. Before embarking on a raid or hunting expedition, men gathered within the ceremonial house to consult the waken through the hook bearing its image. Offerings of chickens, betel nut, or other items were hung from the hook and then consumed by a human “attendant,” who went into a trance during which the waken spoke through him, providing advice." (http://www.metmuseum.org/art/collection/search/311260)