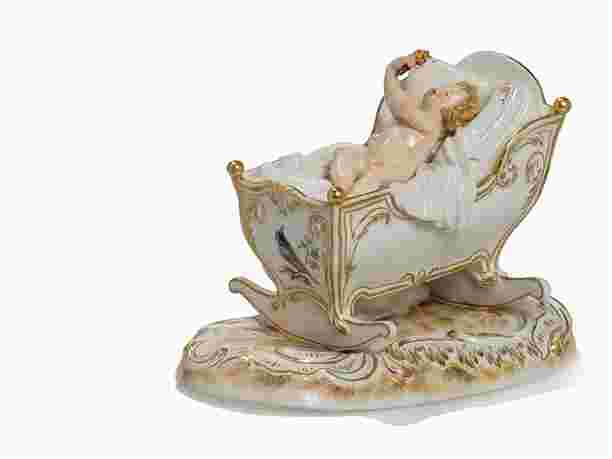 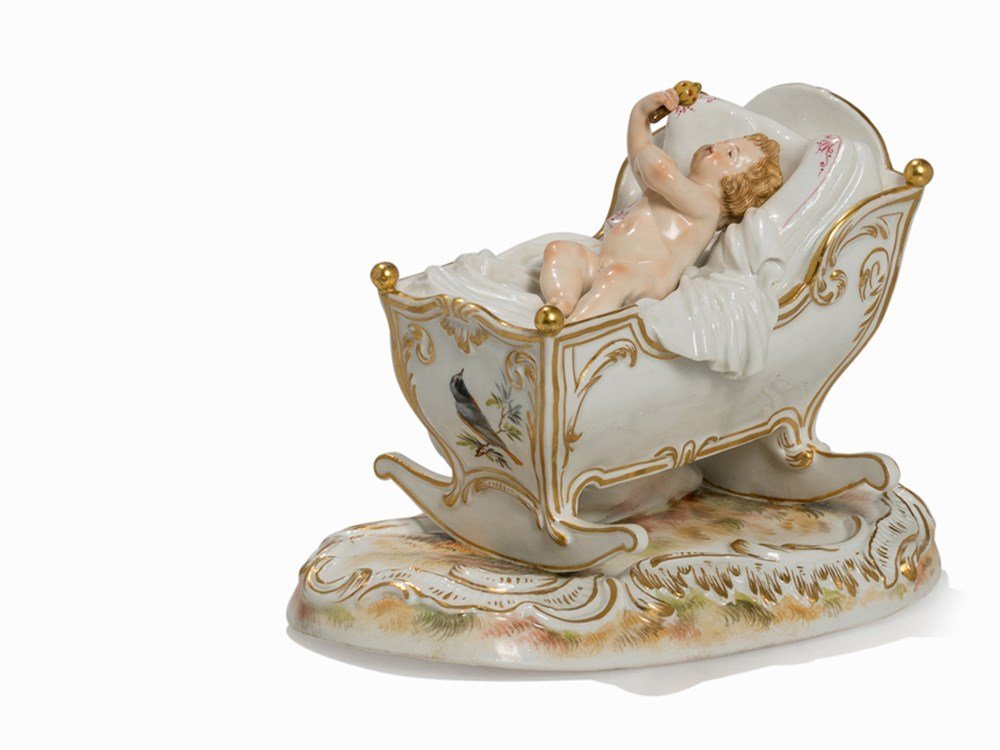 Condition:
The figure is in very good, restored condition. The gilt décor is minimal rubbed in places. The height measures 11 cm. (nlu)

Porcelain Manufactory Meissen
Porcelain has been known in Europe since the 13th century, but always had to be imported from China. Thus it was mostly of lower quality – the Chinese rarely gave their best ware to the foreigners – and extremely expensive. As demand for porcelain became greater, European alchemists tried to discover the formula to create hard-paste porcelain. The production of the first European hard-paste porcelain was the result of a collaboration between the alchemist Johann Friedrich Böttger and the scientist Ehrenfried Walther Graf von Tschirnhaus at the court of Augustus the Strong, Elector of Saxony, in Dresden. As a matter of fact, it was finally achieved for the first time in Europe in 1708 to produce a white hard paste porcelain and in 1710 Augustus established Europe’s first hard-paste porcelain factory in the Albrechtsburg, a palace in Meissen. The so-called ‘Böttgerporzellan’ actually had more of a stoneware quality and it was not until the year 1713 that white porcelain was available for purchase. Initially unmarked, the motif of the ‘crossed swords’ was developed in the early 1720s and used from 1723 onwards. Since then, beautifully modelled and painted figures and table services were produced at Meissen, establishing its reputation as the pre-eminent porcelain factory in Europe. Outstanding potters, modelers and painters, e.g. Johann Joachim Kändler (1706-1775), Johann Gottlieb Klinger (1701-1781) and Count Camillo Marcolini (1739-1814), were employed at the factory, which dominated the 18th century style of porcelain, and Meissen wares and figurines were imitated by craftsmen at other porcelain factories throughout Europe. Meissen celebrated its 300 years of existence in 2008. Until today, Meissen porcelain is known for highest quality and originality and greatly appreciated.