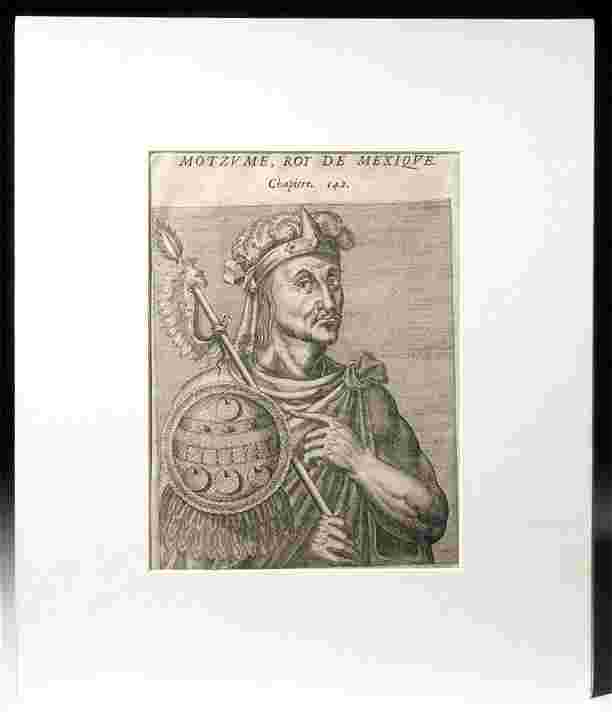 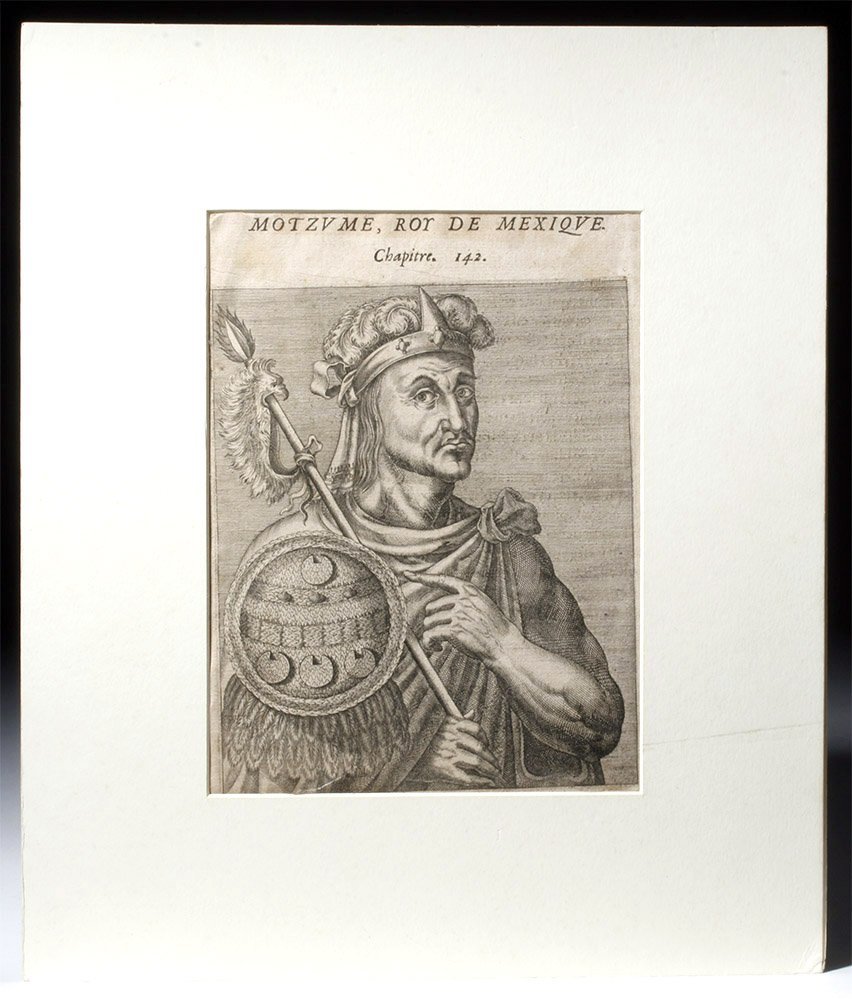 Europe, France, Andre Thevet (French, 1502-1590), "Motzume, Roy de Mexique," ca. 1584 CE. An engraving depicting the Mexican Emperor Moctezuma (Montezuma) by Andre Thevet in his book, "Les Vrais Portraits et Vies des Hommes" (The True Portraits and Lives of Illustrious Greek, Latin, and Pagan Men - Paris, 1584). Thevet's engraving is regarded as the earliest portrayal of the Aztec leader Montezuma. Thevet based his depiction on the "Codex Mendoza" (ca. 1540) which he had in his possession by 1553. However, recent scholarship presents interesting theories that Thevet took artistic liberties. According to Associate Professor of Art History Patrick Hajovsky of Southwestern University and author of "Andre Thevet's 'Tru' Portrait of Moctezuma and Its European Legacy", "André Thevet was the sixteenth-century French royal cosmographer whose final work, The True Portraits and Lives of Illustrious Greek, Latin, and Pagan Men (1584), contains over 200 portraits that incorporated Amerindians of the New World into the halls of great European men. As a traveler and collector, Thevet could claim the status of eyewitness to the New World, which, he assumed, would grant him the authority to invent the visage of the Aztec king Moctezuma, for which there was no visual basis. While this invention was a necessity, it reveals the power of portraiture to reclaim the status of eyewitness by those who held his book. Nonetheless, Thevet’s ethnography was part of a European colonial project that was under intense scrutiny during his time, as was his accountability as eyewitness. For these reasons his portrait of Moctezuma was transformed by later authors who otherwise reproduced portraits from his book." (http://www.southwestern.edu/live/events/5822-art-history-working-papers--reinventing-the). A fascinating depiction of this legendary Mexican ruler as seen through the eyes of the French traveler and royal cosmographer! Size: 8" L x 6" W (20.3 cm x 15.2 cm); 12.75" L x 10.75" W (32.4 x 27.3 cm) matted

Matt has come unglued a bit, but engraving is intact.