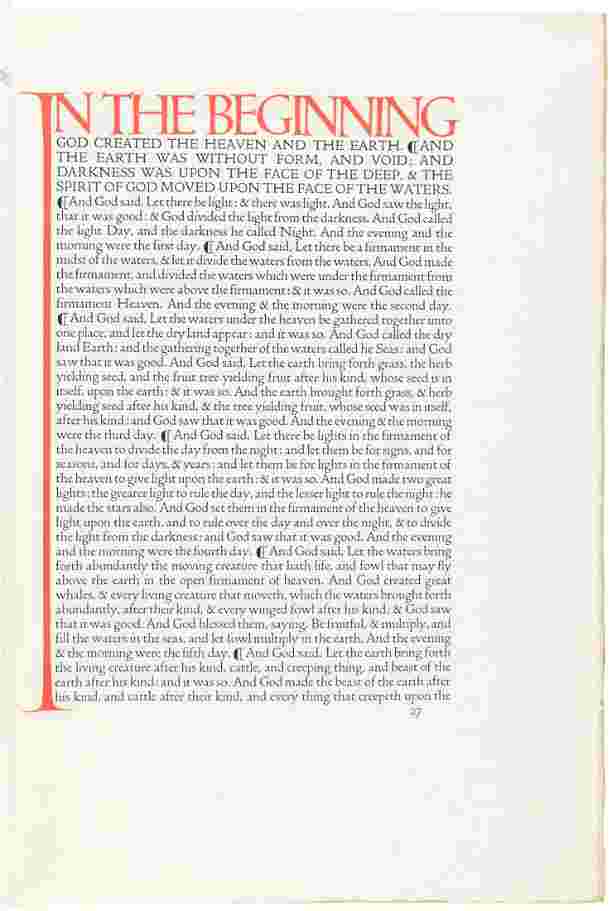 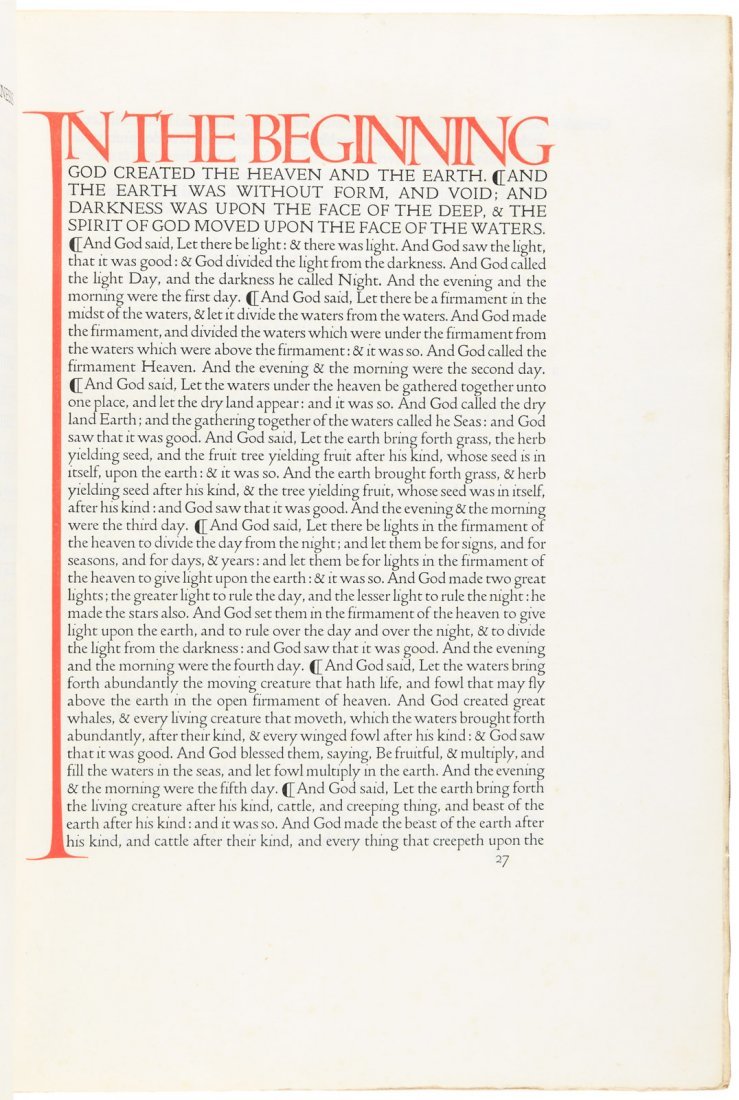 _x000D_
One of the legendary fine printings of the Bible and the Masterpiece of the Doves Press. The sixth publication of the press. The text has been "revised by a collation of its early and other principal editions and edited by the late Rev. F.H. Scrivener M.A. L.L.S. for the Syndics of the University Press Cambridge." The Doves Press of T.J. Cobden-Sanderson and Emery Walker was a significant contributor to the fine press tradition of the Arts and Crafts movement. The pair were associates of William Morris, founder of the Kelmscott Press, their press replaced the ornateness of Morris's designs, retaining however the sense of drama through bold details and the iconic Doves Type. All of the Doves' printings were produced with a single font of type, a font that would later be lost when, in a now infamous action in response to a bitter dispute with Walker, Cobden-Sanderson tossed all existing matrices into the River Thames from Hammersmith Bridge. The crown jewel of Doves' achievements remains this edition of the King James Bible, with the iconic initial letter "I" from "In the Beginning" gently cascading down the page, alongside the elegant block of text. Tidcombe, DP 6. Provenance: The Estate of John Phelan, purchased in 1972 from David Magee who had purchased the set from the estate of Mrs. John I. Walter of San Francisco. Magee had sold the set to Mrs. Walter himself around 1935 after first purchasing it from London bookseller Marks & Co. A letter from Magee and Dr Phelan's receipt are laid in. The slipcases were made by Herbert and Peter Fahey for Mrs. Walter.

Slipcases lightly worn; vellum a bit yellowed, a few small spots of wear to spine of first volume; light foxing toward front and rear of volumes, a bit heavier in first and second volume; still near a near fine copy.

2,978 Followers
Get notifications from your favorite auctioneers.
As Seen On
Shop With Confidence
Since 2002, LiveAuctioneers has made exceptional items available for safe purchase in secure online auctions.
Popular Searches
Artists & Creators
Brands
Style Periods
Origins
Company
Winning
Selling
© 2002-2020 LiveAuctioneers. All Rights Reserved.Cookie PolicyTerms & ConditionsPrivacy Policy
This site is protected by reCAPTCHA and the Google Terms of Service and Privacy Policy apply.
BACK TO TOP