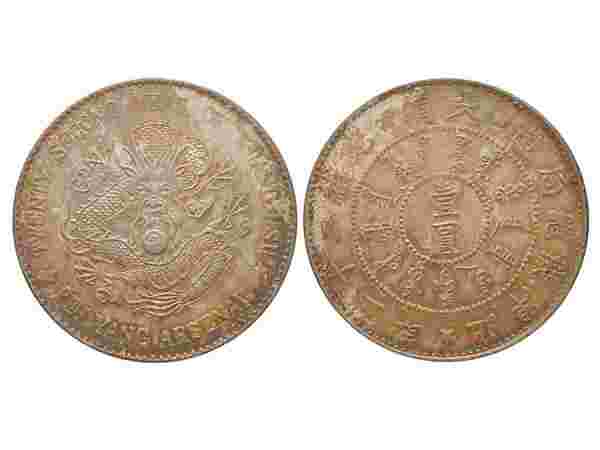 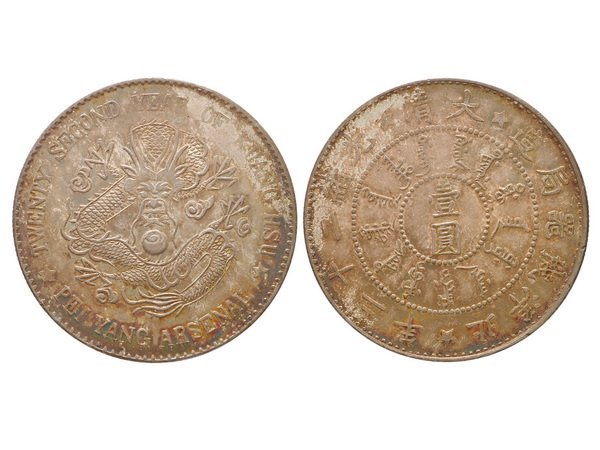 The first silver coins struck at the Peiyang Arsenal Mint in Tientsin are dated Year 22 (1896) and feature a distinctive dragon with long horns and a large head. This style dragon was only used at this mint and only on the 1896 coins. The 1897 and later coins have a different style dragon.

Who supplied the minting equipment and the dies remains a mystery. Kann's History of Minting in China did not even include this mint. Woodward could find little information on it and even Richard Wright, writing in the 1970's could offer little. The dragon used on the coins of the first three years is very distinctive, and was only used by this mint. Even the coins of 1899 and later, intended to look more like the silver coins made in other provinces, are still quite distinctive. I suspect the dies for these coins were made in Japan, but have no evidence to support this. However at least some of the dies for the Hupoo coinage of 1903 (which was minted in Tientsin ) were made in Japan.

Another unusual feature of the early Peiyang coins is that they are denominated "One Dollar" in Chinese instead of the "7 Mace 2 Candareens" used by all the other mints. When the coinage was redesigned in 1899, the Chinese denomination was changes to "7 Mace 2 Candareens" to match other dragon dollars. However, the dollars produced in Tientsin after a coinage reform are marked "One Dollar" again in Chinese and English (Kann 212, K.219, K.223-227)

Richard Wright is of the opinion that though the Peiyang mint may have received its machinery in 1896, it did not begin production until the middle of 1897, when it would have struck the 1896 dated coins. I am afraid he is wrong on this point. The U.S. Mint Report for 1897 contains a letter dated March 29, 1897 from Sheridan F. Read, U.S. Consul at Tientsin, to W.W. Rockhill. He also says that the 1897 coins were in general circulation. Further, he mentions having sent on January 20, 1897 a set of the 1896-dated (22nd year) coins, and he notes that the 1896 coins do not have "Ta Tsing" on the dragon side. Clearly the 1896 coins were made in 1896, though probably late in the year.

244 Followers
Get notifications from your favorite auctioneers.
As Seen On
Shop With Confidence
Since 2002, LiveAuctioneers has made exceptional items available for safe purchase in secure online auctions.
Popular Searches
Artists & Creators
Brands
Style Periods
Origins
Company
Winning
Selling
Â© 2002-2020 LiveAuctioneers. All Rights Reserved.Cookie PolicyTerms & ConditionsPrivacy Policy
This site is protected by reCAPTCHA and the Google Terms of Service and Privacy Policy apply.
BACK TO TOP