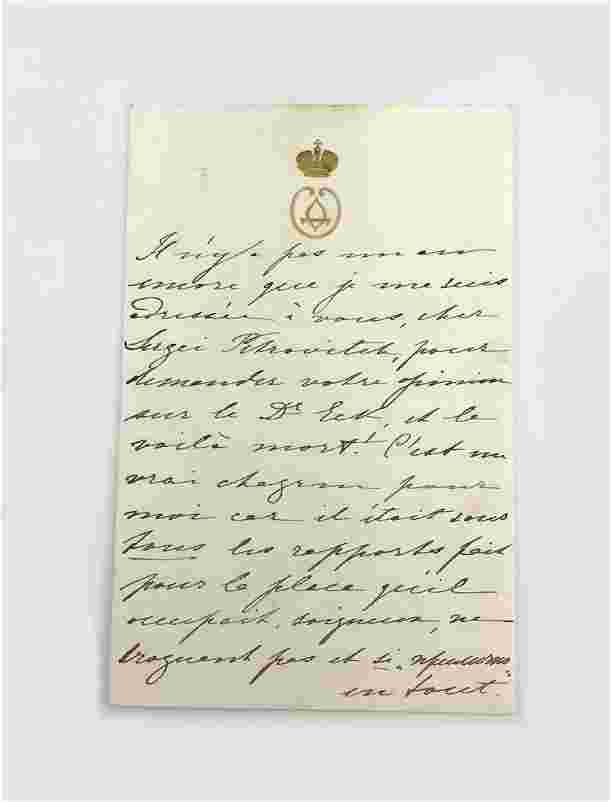 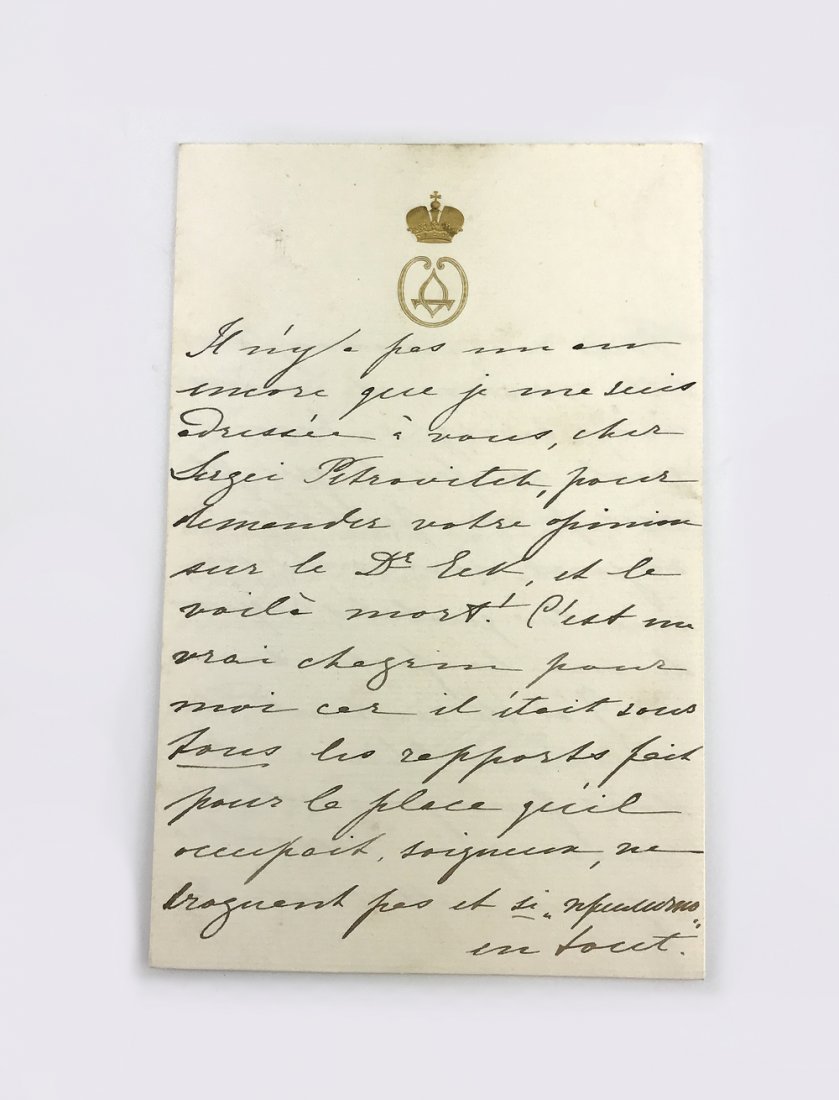 Handwritten in French on stationery embossed with her Imperial cypher surmounted by the crown in gold, the Imperial crown in gold, the letter dated 6 April 1888, written to Court Physician Sergey Botkin requesting his medical opinion. The four page letter on her folded stationery. Grand Duchess Olga Feodorovna (1839-1891) was born Cecilie of Baden but took the name Olga upon her conversion to Russian Orthodoxy and marriage to Grand Duke Mikhail Nikolaevich (1832-1909). She was the mother of Grand Duke Alexander Mikhailovich and mother-in-law to Grand Duchess Xenia Alexandrovna. Physician Sergey Botkin (1832-1889) was born into a wealthy Moscow merchant family. He finished his medical education shortly before the outbreak of the Crimean War, where his training under Nikolai Pirogov, a pioneer of field surgery, had a great influence on the younger man's career. Botkin was ultimately responsible for introducing triage, pathological anatomy, and post-mortem analysis to regular Russian medical practice. He opened his own research laboratory in 1860 and his innovations won him a position as an Advising Member of the Imperial Ministry of Internal Affair's Medical Board. He was a court Physician to both Emperor Alexander II and Alexander III and was named Head Surgeon to the Emperor in 1873. His father had a total of 25 children from his two marriages and many members of Botkin's family were equally prominent. His brothers included the writer Vasily Botkin (1812-1869) and the painter and art collector Mikhail Botkin (1839-1914); his sister Maria married the writer Afanasii Fet (1820-1892). Botkin himself was married twice, first to Anastasia Krylova (1835-1875) and second to Princess Ekaterina Obolenskaya (1850-1929). His son Eugene Botkin (1865-1918) was Court Physician to Nicholas II and perished with the Imperial family in 1918.

This Jasper52 auction is curated in partnership with John Atzbach, a leading authority in the field of Russian works of art made in and representing the tastes of the late Imperial era (late 17th century to the 1917 Revolution).

He was introduced to the subject at the age of 9, when a neighbor, recognizing his interest, allowed him to examine her collection of Russian enamels. He was immediately intrigued and spent the next several years learning all that he could about Russian silver and enamels, honing his knowledge before he began collecting them himself, fulfilling a childhood dream.

With a lifetime of knowledge in Russian decorative arts, John Atzbach is regularly consulted by collectors, dealers, appraisers, and auction house representatives from around the world. He has been directly involved in the formation of some of the world's finest collections of Russian enamels, Russian porcelains, and Faberge. He greatly enjoys his work and feels very fortunate that his childhood interest could evolve into a lifelong passion that continues to engage him every day.

Please note that this lot has a reserve. When you leave a bid in advance of the auction, submit your maximum. Jasper52 will bid on your behalf as much as necessary to ensure that you meet the reserve price or that you remain in the lead, up to your maximum. The bidder who has submitted the highest bid wins the lot, provided the bid exceeds the reserve price.

28,768 Followers
Get notifications from your favorite auctioneers.
As Seen On
Shop With Confidence
Since 2002, LiveAuctioneers has made exceptional items available for safe purchase in secure online auctions.
Popular Searches
Artists & Creators
Brands
Style Periods
Origins
Company
Winning
Selling
© 2002-2020 LiveAuctioneers. All Rights Reserved.Cookie PolicyTerms & ConditionsPrivacy Policy
This site is protected by reCAPTCHA and the Google Terms of Service and Privacy Policy apply.
BACK TO TOP