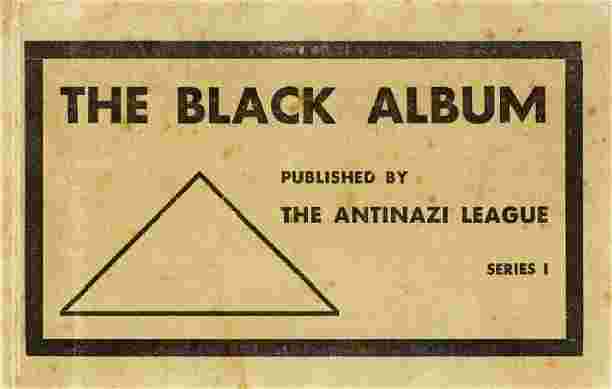 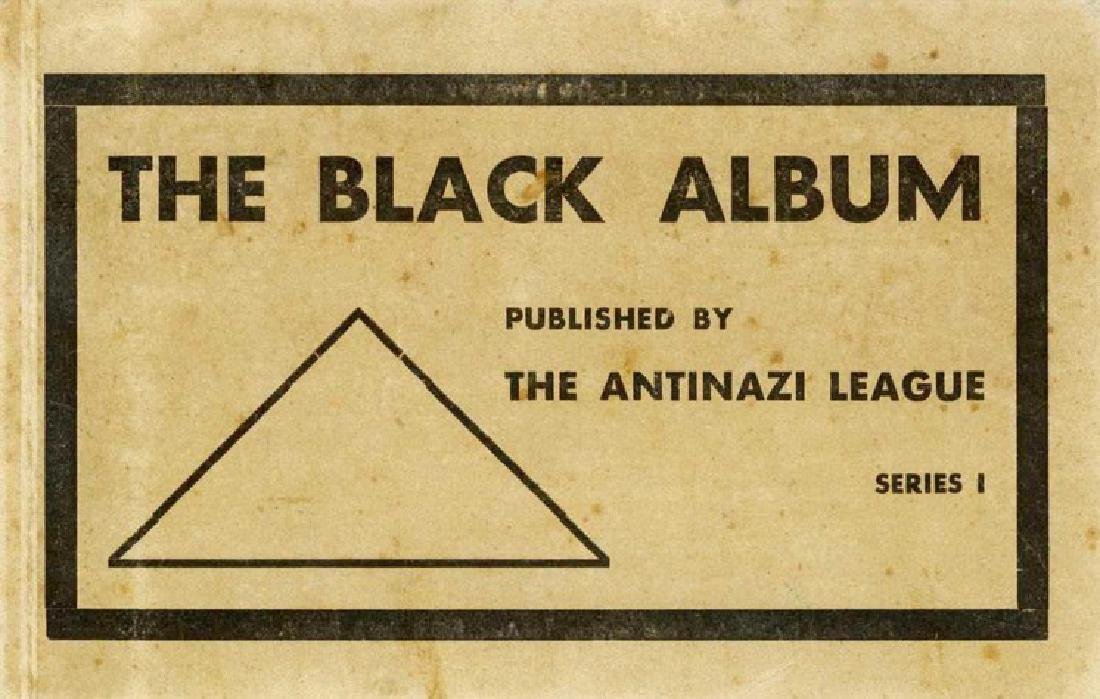 THE BLACK ALBUM. Published by the Anti-Nazi League, Tel Aviv, Nissan 1940. Hebrew, English, and French. Looseleaf with postcards, with all ten postcards.
The Anti-Nazi League that Â published this album in April 1940 tried publicizing the Nazi atrocities before they wereÂ recognized throughout the world. As they write at the start of the album: "The most tragic thing is that people aren't paying attention to this horrifying information from Poland...that's why the Anti-Nazi League in Palestine took upon itself the task of breaking the apathyÂ of the world community to these events...and intends toÂ publish various series of pictures and illustrations that will emphasize these terrible deeds, by the representatives of Satan, in an appropriate manner. This publication is the first series and includes 10 pictures..."
The postcards were meant to be sent to acquaintances in order to reveal the barbaric face of the Nazis. Each postcard features the printed text: "Send this card to everyone you know in the world and participate in the disclosure of the Nazi crimes." Each postcard depicts a specific crime. For instance: "Death in the wake of Hitler" - in occupied Poland, Hitler systematically destroyed the Polish and Jewish population in an incomparablyÂ cruel manner. "The work of Nazi hangmen" - every day hundreds of innocent people are sentenced to death in Poland, including many rabbis, sofrim...and remain hanging on the poles. "The Nazi murderers enjoy themselves" - depicts family members forced to bury their dead in graves that were oftenÂ dug by the murdered themselves. "The road for victors" - that's what the Nazis announced in Poland. According to Nazi ethics, not just the roads of the occupied countries belonged to them, but also the homes and possessions - even the air. The captured are left with only one path to take - the path to death. "The horrific race" - to satisfy their sadistic pleasure, the Nazis commanded Polish prisoners to run before a car. Those who failed to reach the goal would be shot or run over by the car..."
There is also a detailed description of the Nazi abuse that was only revealed to the world years later, such as: TheÂ death of thousands by cold and hunger, daily hanging of people throughout Poland, harsh labor, cleaning streets, burning the bodies, and more.
The League's motto: "Zechor asher asa lecha Hitler!" The album's introduction is written in Hebrew and English. The postcards are described in English, but the captions are in Hebrew and French. Stains.Â
[8] pages, 10 postcards [8] pages. Postcards measure 14x10 cm, looseleaf measures 10.5x16 cm.
Three postcards are detached.
Â Fine condition.Â