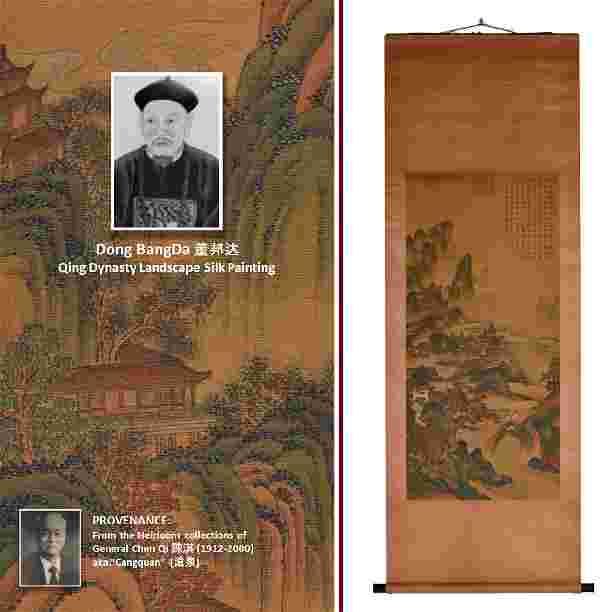 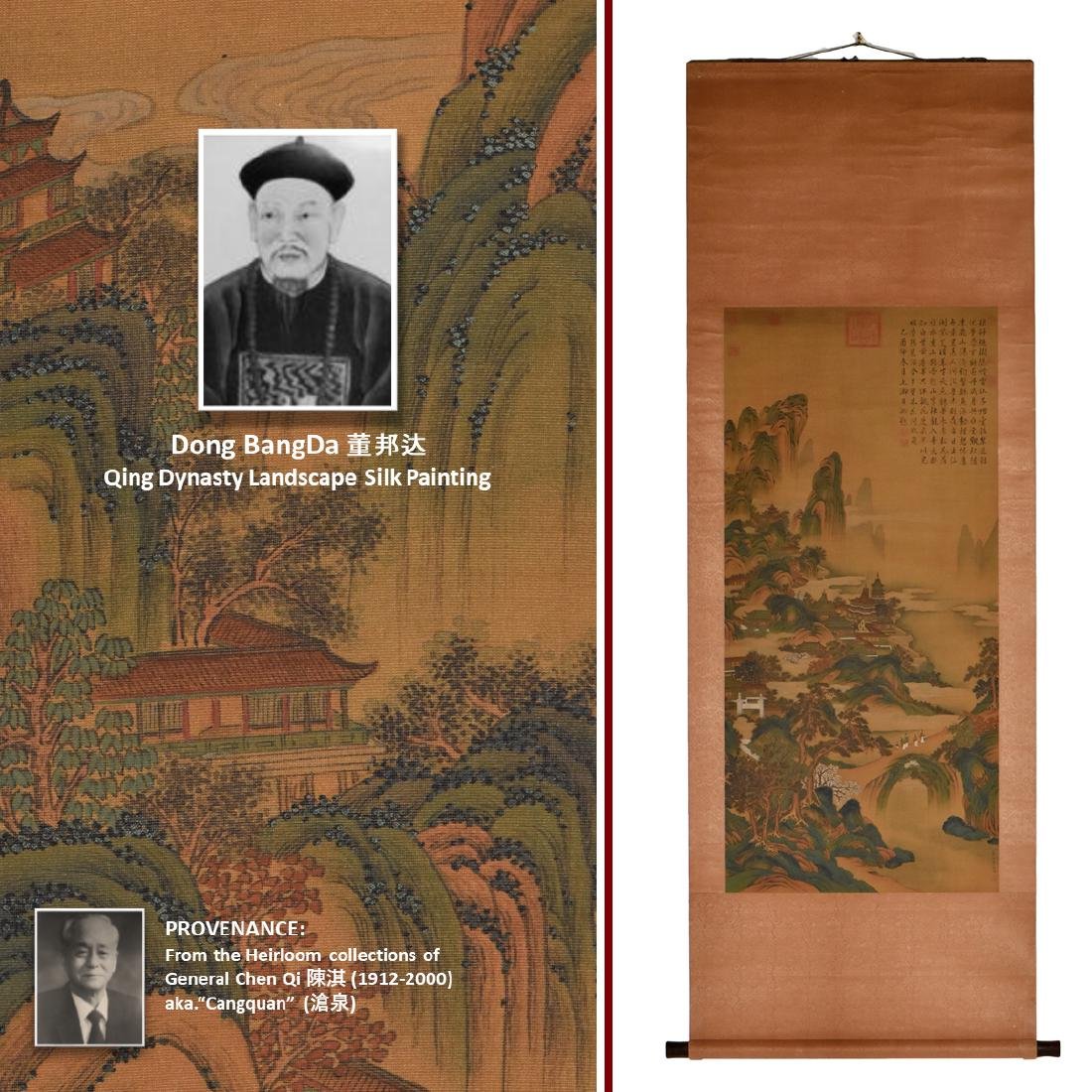 Dong BangDa 董邦达 (Chinese, 1699-1769), Qing Dynasty Chinese traditional scroll painting, ink and color on silk. Hand painted in in variegate tones, restrained and subtle colors with fine brush strokes, depicted retired schollars and nobleman seeking for Tao, on their path toward pavilion nestled in peaceful village beneath the hill rock outcrop mountain summit and tress against waterside misty highland landscape. With themed calligraphy lettering inscriptions, followed with artist's signature and iron-red seals. This master works painting can be represent the full-blown alternative culture as this disenfranchised elite transformed their estates into sites for literary gatherings and other cultural pursuits. These gatherings were frequently commemorated in paintings that, rather than presenting a realistic depiction of an actual place, conveyed the shared cultural ideals of a reclusive world through a symbolic shorthand in which a villa might be represented by a humble thatched hut.
Mounted on pale-reddish-brown silk border, set behind glass and wooden framed.

The portion of the sale will benefit a local church in Atlanta area.

From the collection of General Chen Qi 陳淇; (1912-2000), who styled himself as “Cangquan” (滄泉and “Yuquanshanren”玉泉山人), an artist, calligrapher, a prominent businessman and private antiques collector.
EDEN Fine Antiques Galleries is honored and proud to offer, once again, to be the last General Chen Qi's heirloom collections including unpublished painting from Zhang DaQian, Fu BaoShi, Qi BaiShi, Huang JunBi, Wu ChangShuo, Xu BeiHong, Dong ShouPing, Dong BangDa 董邦达, Li XiongCai, and many other famous artists; along with his extraordinary Chinese porcelain collections.
General Chen Qi's collections can be found on Lot-128 through Lot-161 (Day 1), continuing at Lot-402 through Lot-423 (Day 2).
For more information about General Chen Qi's Biography, please refer to this link:


Chen Qi (陳淇;), who styled himself as “Cangquan” (滄泉and “Yuquanshanren”玉泉山人), is a modern collector.
Chen Qi was born in Fujian on March 8, 1912 in a merchant family. He was well educated in traditional culture since childhood. Chen Qi began to learn literacy from his grandfather since 1916, and had studied enlightenment readings such as Three Character Classic, Thousand Poems, Book of Filial Piety, and Confucian classics, etc.. He also studied Tang Kai (one of the Chinese traditional calligraphy scripts originated from Tang Dynasty) as daily calligraphy class.
In 1927, Chen Qi was enrolled in a Christian school.
In 1928, Chen Qi dropped out of school due to illness. While recuperating at home, he read books and newspapers, and gained a deeper understanding from his communications with businessmen from the South of the devastated and weakened old Chinese society. Just like other youths full with aspirations in the turbulent time, Chen Qi determined to transform China and save Chinese people from the crisis.
In 1932, Chen Qi went to Japan and was enrolled in the famous Imperial Japanese Army Academy, a military school founded in 1868. Imperial Japanese Army Academy was committed to Militaristic Spiritual Education and had successfully trained a large number of senior generals participated in the war of aggression again China later on. Many famous modern Chinese generals also graduated from Imperial Japanese Army Academy, such as Cai E, Ying Heqin, Li Rujiong, Tang Enbo, etc.
While Chen Qi was in Japan, he not only met his wife, Qiuben Jiumeizi, who accompanied him by a lifetime (moved to China with Chen Qi later on and changed her name to Lin Yachun), in May 1935, he also got to know Chinese painter, Fu Baoshi, who was holding a Exhibition at the time. It was the first exhibition Fu Baoshi held in Japan. Both staying in foreign country, the two became friends right away. In June of the same year, Fu Baoshi went back to China due to his mother's serious illness (his mother already passed away after his return). Two months later, Chen Qi returned to China as well and was invited by Fu Baoshi to visit Nan Chang, where Fu held his first personal exhibition in China.
In 1935, Chen Qi was appointed by National Revolutionary Army to teach in Republic of China Military Academy, also known as Huangpu Military Academy. He became Deputy Director of Training and was granted the rank of Major General. During his tenure, he had made great contribution through training of military personnel. Just like what the founder of modern China, Sun Zhongshan, had said, we found this school to lead the students to become the foundation of revolutionary army. You will be the future elites of revolutionary army. And this is the way that lead to our success in revolution.
During his term as director, Chen Qi developed extensive social contacts not only in politics, but also in business, literary and art circles. He also concentrated in calligraphy, reading and painting.
In January 1936 (the 25th year of the Republic Era), Chen Qi went to Tianjin (original destination was Beijing but stayed in Tianjin for a few days) to attend an exhibition in Tianjin Yong'An Restaurant, held by a group of painters including Zhang Daqian, Zhang Shanzi, Xiao Qianzhong, Hu Peiheng, Xu Yansun, Yu FeiAn, He Haixia, etc.. During the trip, besides political and business affairs, Chen Qi had made contacts with celebrities in literary and art circles, including Mei Lanfang and Qi Baishi.
Although working in military during the turbulent time, Chen Qi was still deeply affected by Confucianism and traditional cultural education he received since childhood. He continued studying in painting and focused on collection of various arts and antiques from various Chinese Dynasties.
In 1955, after arriving at Taiwan, Chen Qi was appointed as military official of the embassy in Indonesia. He attended multiple international affairs and meetings on behalf of Nationalist Government (Guomin Government), and often travelled between Taiwan and Indonesia due to business and political reasons. In Taiwan, he had close personal relationships with Pu Xinyu, Zhang Daqian, Huang Junbi, Xu Fuguan, Hu Shi, and Yu Youren, etc.. He was also a frequent guest of Jiang Jieshi and Song Meiling.

During his work in Indonesia, Chen Qi got to know Chinese painters such as Wu Zishen and Yan Wanyu, and built close personal relationship with them. They often send each other letters and poems to maintain contacts.
In 1965, Chen Qi left his job in Indonesia, and travelled frequently to mainland China during the 80s. He was generous and made multiple contributions to nonprofit programs and organizations in his homeland, including building schools, water conservation, and newspaper industry. Meanwhile, he continued studying calligraphy, especially during his old age, and enjoyed simple life.

Over all in EXCELLENT Condition. Natural imperfection on the medium (paper or silk), regardless from any major damages; includes light blooms, discoloration and minor fading. Consider normal due to the ages.


The bidder assumes responsibility for ensuring that the condition of the item(s) meets with their satisfaction prior to bidding. Any condition statement is given as a courtesy to a client, and is only an opinion and should not be treated as a statement of fact. EDEN Galleries shall have no responsibility for any error or omission. The absence of a condition statement does not imply that the lot is in perfect condition or completely free from wear and tear, imperfections or the effects of aging.

1,873 Followers
Get notifications from your favorite auctioneers.
As Seen On
Shop With Confidence
Since 2002, LiveAuctioneers has made exceptional items available for safe purchase in secure online auctions.
Popular Searches
Artists & Creators
Brands
Style Periods
Origins
Company
Winning
Selling
© 2002-2020 LiveAuctioneers. All Rights Reserved.Cookie PolicyTerms & ConditionsPrivacy Policy
This site is protected by reCAPTCHA and the Google Terms of Service and Privacy Policy apply.
BACK TO TOP