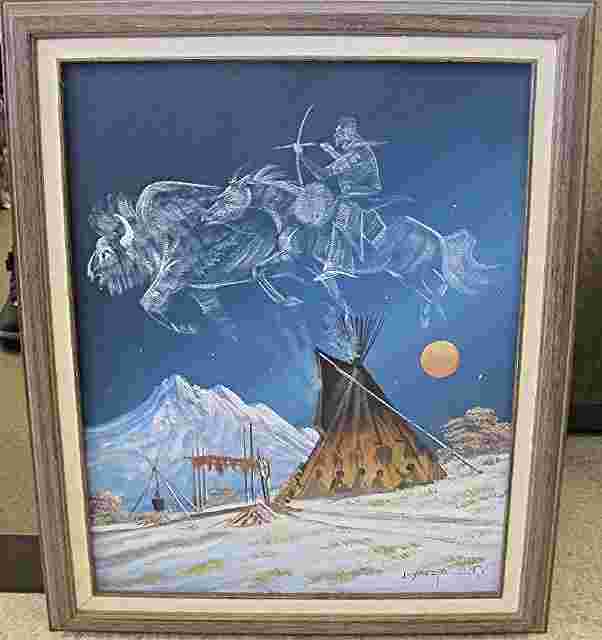 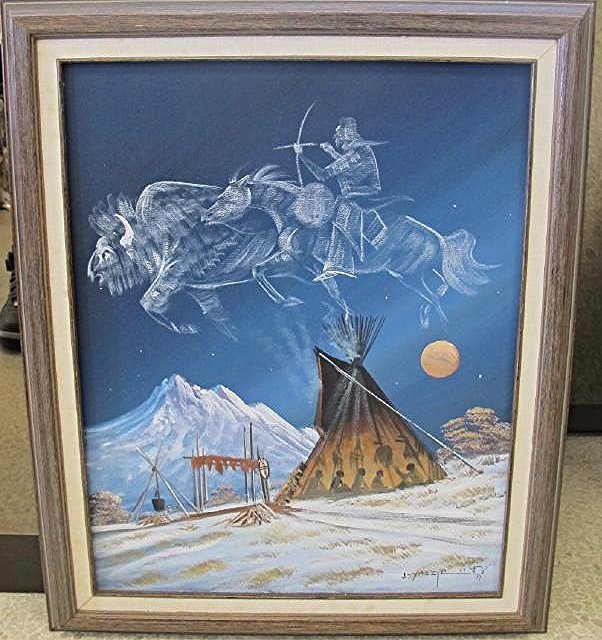 Telling of Buffalo Run by Johnny Yazzie, 16"x20", 20"x24" Framed, Oil on Canvas. Johnny Yazzie (born 1945)
Johnny Yazzie is active/lives in New Mexico, Arizona. Johnny Yazzie is known for Southwest landscape, Native American portrait and genre painting, sculpture.
The son of a medicine man and a Navajo traditional weaver, Johnny Yazzie was born on December 29, 1945 on the Navajo Reservation east of Tuba City, Arizona. He is a painter, sculptor and jewelry maker, known primarily for his Southwest and Plains scenery paintings.
Yazzie received his early education at the Tuba City Boarding School and then the Sherman Institute in Riverside, California. He later attended the Institute of American Indian Arts and the College of Santa Fe, where he completed his Associates Degree in Fine Art.
He regards the Plains Indians who are subjects of many of his paintings a part of his extended family and conveys in his work a sense of spirituality, history, and his love for nature. He has exhibited his art at the Institute of American Indian Arts in Santa Fe, NM, The Heard Museum in Phoenix, AZ and art galleries/shows in Denver CO, Santa Monica, CA, Sedona, AZ and Albuquerque, NM. He also won awards at the New Mexico State Fair among others.

580 Followers
Get notifications from your favorite auctioneers.
As Seen On
Shop With Confidence
Since 2002, LiveAuctioneers has made exceptional items available for safe purchase in secure online auctions.
Popular Searches
Artists & Creators
Brands
Style Periods
Origins
Company
Winning
Selling
© 2002-2020 LiveAuctioneers. All Rights Reserved.Cookie PolicyTerms & ConditionsPrivacy Policy
This site is protected by reCAPTCHA and the Google Terms of Service and Privacy Policy apply.
BACK TO TOP