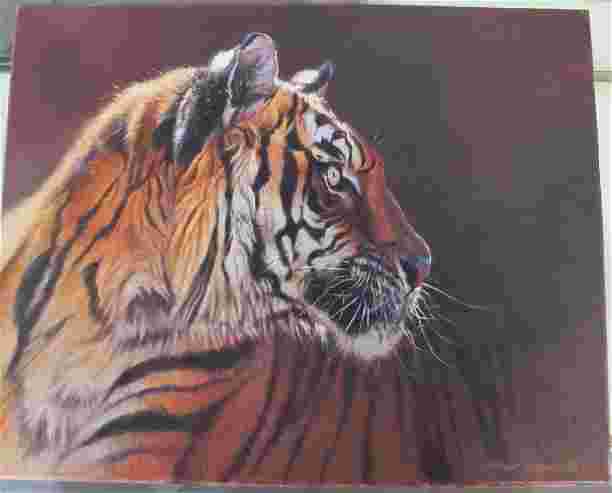 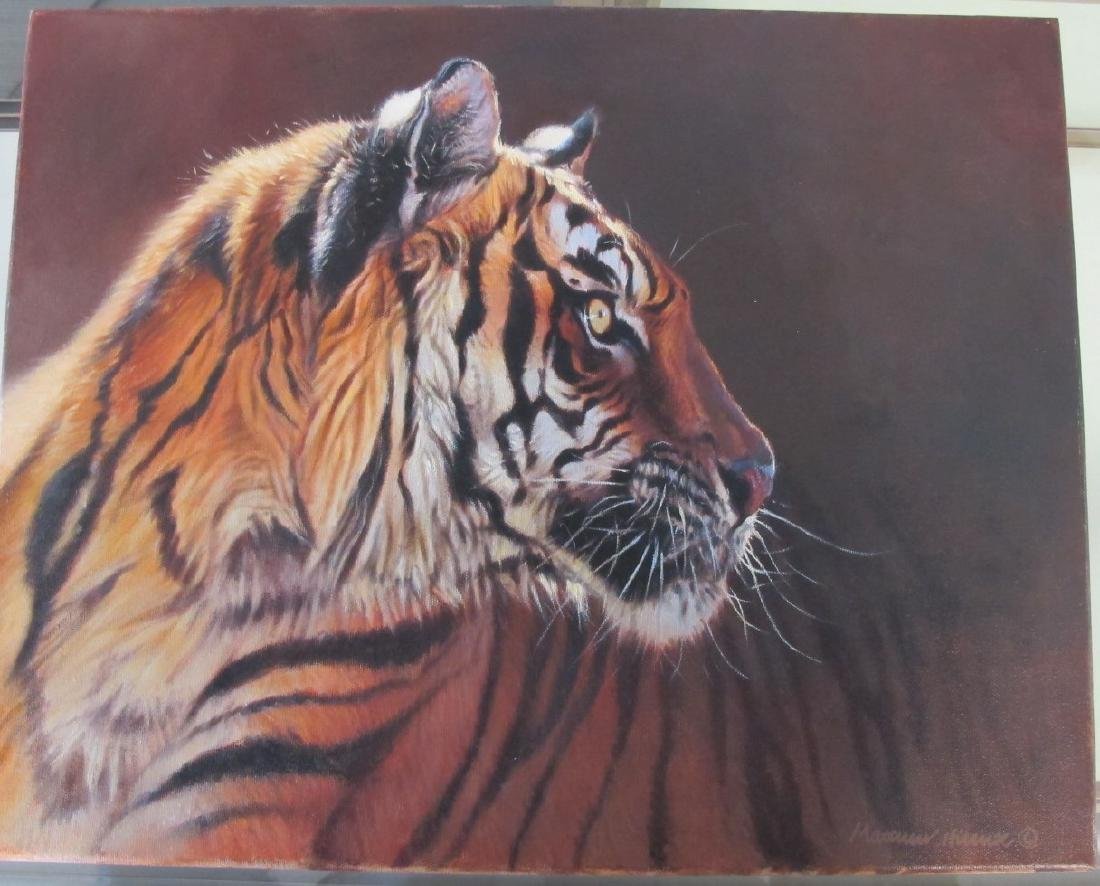 Tiger Painting by Matthew Hillier (England/UK born 1958), Oil on Canvas, Unframed 20"x16", Signed Bottom Right. Wildlife artist Matthew Hillier was born in England and grew up near Windsor Castle. Married to fellow artist Julia Rogers, he now lives in the United States. Drawing and painting is something he has loved to do since a child. Hillier’s father was a museum designer who taught his son the rudiments of painting with watercolors, a medium Hillier used during his years as an illustrator, along with gouache. In recent years, when he made the transition from illustrator to wildlife and landscapes, Mathew paints in oil and acrylic enjoying the more painterly results in his work.
Traveling widely in search of subjects to study and paint, Hillier has visited Africa - where he was once charged by an angry elephant as well as painting trips to India, Europe and Southeast Asia. He loves the big cats and rhinos and finds himself drawn to the water birds. When doing field research, Hillier sketches and also takes photographs, finding that while the photos are very useful for details of color, shape, background and texture, sketching forces him to 'feel the subject' more.
Hillier studied at Dyfed College of Art in Carmanthen, West Wales, and graduated with distinction. Three of his paintings were accepted by the Royal Academy Summer Exhibition, and he has exhibited regularly at the Pastel Society, the Society of Wildlife Artists, The Royal Institute and the Miniature Society, as well as the Paris Salon, the Royal Society of Marine Artists and the Blaritz Salon. A member of the society of Animal Artists, his work is part of their traveling exhibition. He has participated in Christie’s Wildlife Art Auction, and his work has been included frequently in Leigh Yawkey Woodson Art Museum's noted touring show " Birds in Art." Hillier has had several one-man exhibitions throughout Great Britain and has illustrated numerous books.
In 1995, he won the World Wildlife Fund Fine Art Award. In 1998 he received The People’s Choice Award from the Florida Wildlife and Western Art Expo, and in both 1997 and 1998 he received the Society of Animal Artists’ Award of Excellence. He was one of six Featured Artists at the Florida Wildlife Art Exposition in 2001 and was also featured at the Waterfowl Festival in Easton, Maryland. In 2002 Matthew won an award of excellence and a purchase award from the Hiram Blauvelt Museum. In 2010 and again in 2011 Hillier won the Best of Show at the annual Best of the Chesapeake show at McBride Galllery.

580 Followers
Get notifications from your favorite auctioneers.
As Seen On
Shop With Confidence
Since 2002, LiveAuctioneers has made exceptional items available for safe purchase in secure online auctions.
Popular Searches
Artists & Creators
Brands
Style Periods
Origins
Company
Winning
Selling
© 2002-2020 LiveAuctioneers. All Rights Reserved.Cookie PolicyTerms & ConditionsPrivacy Policy
This site is protected by reCAPTCHA and the Google Terms of Service and Privacy Policy apply.
BACK TO TOP