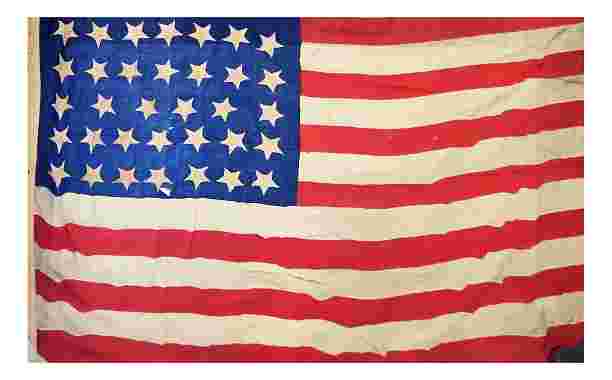 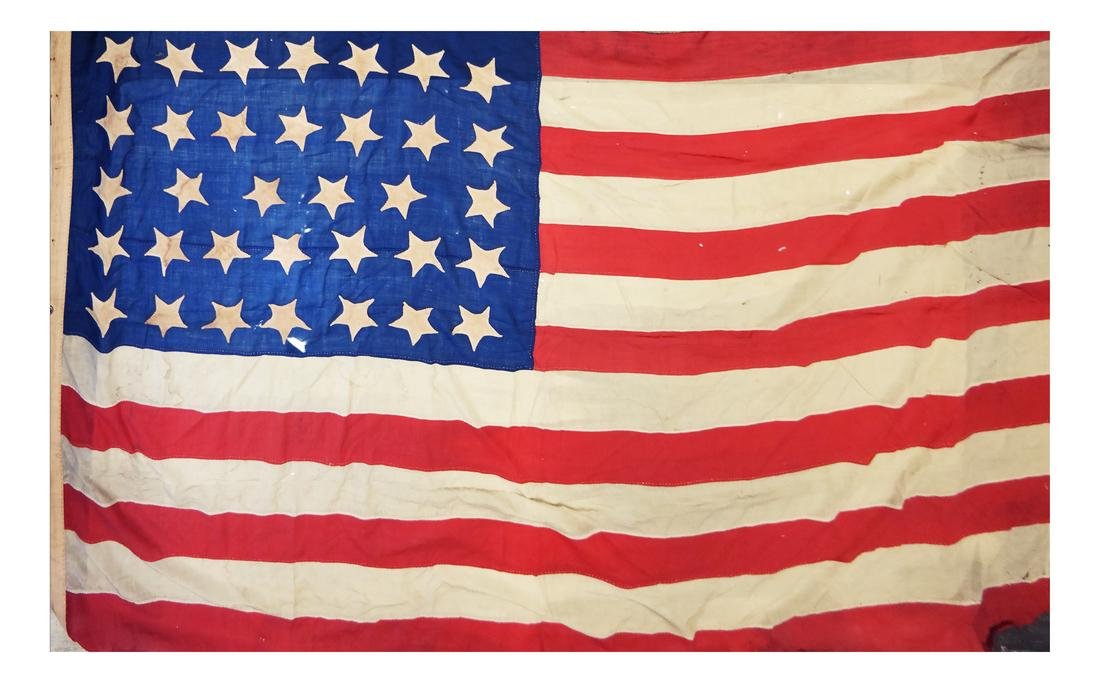 Hand-sewn linen U.S. 34 star flag with canton, stars, and strips all individually affixed. Header bears an affixed textile tag inscribed "J.T. Lockman." The flag was owned by Brevet Brigadier-General John T. Lockman of New York City. On the April 19th, 1861, he enlisted as a private in Company C, Ninth Regiment of New York State Militia. Having recruited Company H for the Ninth Regiment, he was elected its first lieutenant on May 24, 1861. Lockman participated in the Martinsburg campaign under General Robert Patterson, and Ball's Bluff under General Charles P. Stone; was commissioned captain November 25, 1861, and participated in the movements terminating in the occupation of Winchester, Virginia, in March, 1862; the campaign in Virginia, July and August, 1862, under General Pope. General Lockman was commissioned lieutenant-colonel of the 119th New York Volunteers August 13, 1862, and participated in the battle of Chancellorsville May 2, 1863, and on the death of Colonel Peisner in that battle succeeded to the command of the regiment, and on the May 3rd was commissioned its colonel. At the battle of Gettysburg he was severely wounded during the first day's fight, July 1, 1863. On rejoining his regiment in September, 1863, the 11th and 12th Corps were ordered to the Southwest to reinforce General Thomas, and he there took part in establishing communication with General Thomas, or, as it was usually styled, opening the " Cracker Line ;" participating in the battles of Wauhatchie and Missionary Ridge, pursuit of General Bragg, and relief of Knoxville. On April 27, 1864, the 11th and 12th Corps were consolidated, and formed into the 20th Corps. The 119th Regiment was assigned to the Second Brigade, Second Division of that corps, and participated in the battles of Rocky-Faced Ridge and Resaca, at which battle, by order of General Hooker, Lockman led three regiments to an assault on a rebel battery. He participated in the battles of Cassville, Pine Hill, Kolb's Farm, Dallas (where he commanded the Second Brigade), Kenesaw Mountain, Peach-Tree Creek, and the siege of Atlanta, entering the city on September 2, 1864. He also participated in the March to the Sea, siege and occupation of Savannah, Georgia, where he was placed in command of a provisional division to guard the captured cotton and stores. He also participated in the march through the Carolinas and movements resulting in the occupation of Charleston, Columbia, Winsborough, and Cheraw, South Carolina; and Fayetteville, battle of Bentonsville, occupation of Raleigh, North Carolina, and surrender of General Joseph E. Johnston's army at Durham Station. General Lockman was brevetted brigadier-general of volunteers "for meritorious services in the capture of Atlanta." General Lockman served under the following, who were commanders of armies: Generals Scott, McDowell, Patterson, McClellan, Burnside, Hooker, and Meade in the Army of the Potomac; Grant, Rosecrans, Thomas, and Sherman in the Army of the Cumberland; and Slocum, Army of Georgia. Under Corps Commanders, Generals Stone, Banks, Howard, Hooker, Slocum, Williams, and Mower.