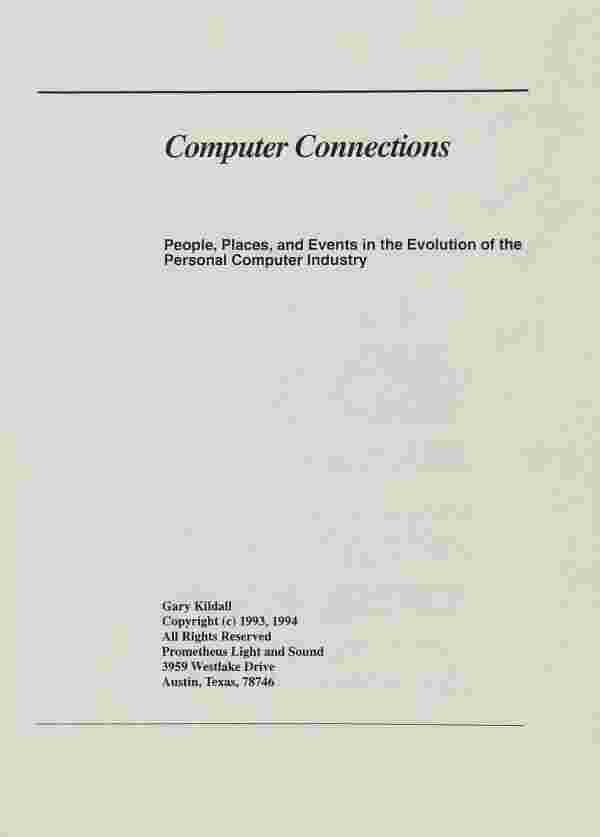 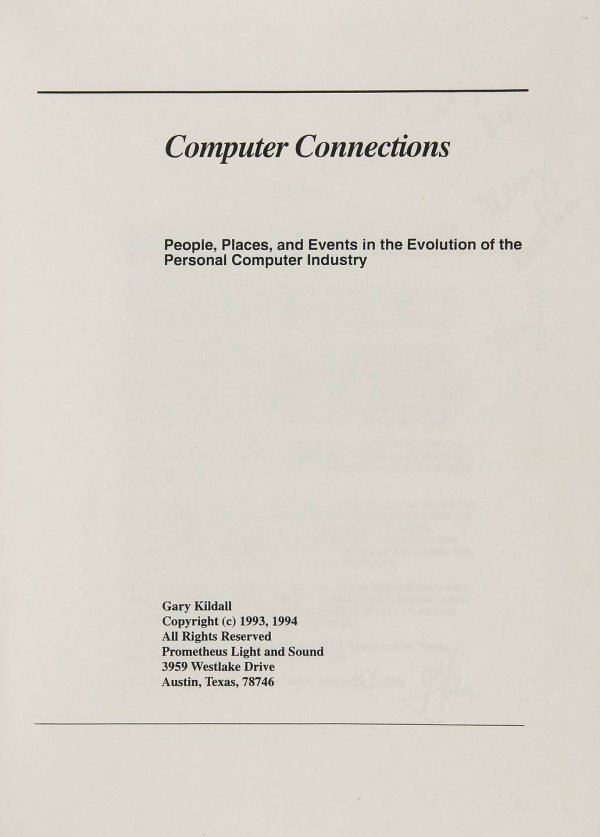 Title: Computer Connections: People, Places, and Events in the Evolution of the Personal Computer Industry
Author: Kildall, Gary
Description: [4], 232, [27] pp. 11¾x8, boards lettered in gilt. No. 24 of 50 copies. First Edition.Initialed by Kildall on the preface/limitation page, also inscribed by him "To Lisa & Jackie, Merry Christmas, Gary." One of the legendary rarities in the literature of the personal computer, revealing the story of its development and and the many personalities involved, told by one of the key players. Gary Kildall, founder of Digital Research (DRI) and creator of the computer language CP/M, wrote the book to tell his side of the early days of PC development, and what he considered the theft of his ideas by Bill Gates and Microsoft. The trigger for writing the book was apparently his pique when the University of Washington asked him, as a distinguished graduate, to attend their computer sciences anniversary in 1992, but gave the keynote speech to dropout Gates. In this memoir, which he distributed only to a few friends, he said of Gates "He is divisive. He is manipulative. He is a user. He has taken much from me and the industry..." Gary Kildall died in July of 1994, barely half a year after the private publication of this book, the consequence of a fall at a Monterey restaurant, either by accident or due to assault, the circumstances are unclear. There are no copies of this book listed WorldCat as being in institutional libraries, and no copies are listed by American Book Prices Current as having sold at auction.
Heading: Place Published: Austin, TX
Publisher:
Date Published: 1993

3,327 Followers
Get notifications from your favorite auctioneers.
As Seen On
Shop With Confidence
Since 2002, LiveAuctioneers has made exceptional items available for safe purchase in secure online auctions.
Popular Searches
Artists & Creators
Brands
Style Periods
Origins
Company
Winning
Selling
© 2002-2020 LiveAuctioneers. All Rights Reserved.Cookie PolicyTerms & ConditionsPrivacy Policy
This site is protected by reCAPTCHA and the Google Terms of Service and Privacy Policy apply.
BACK TO TOP