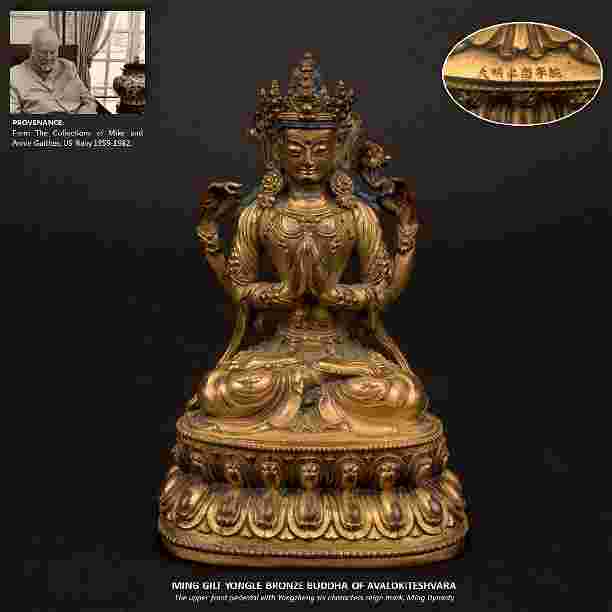 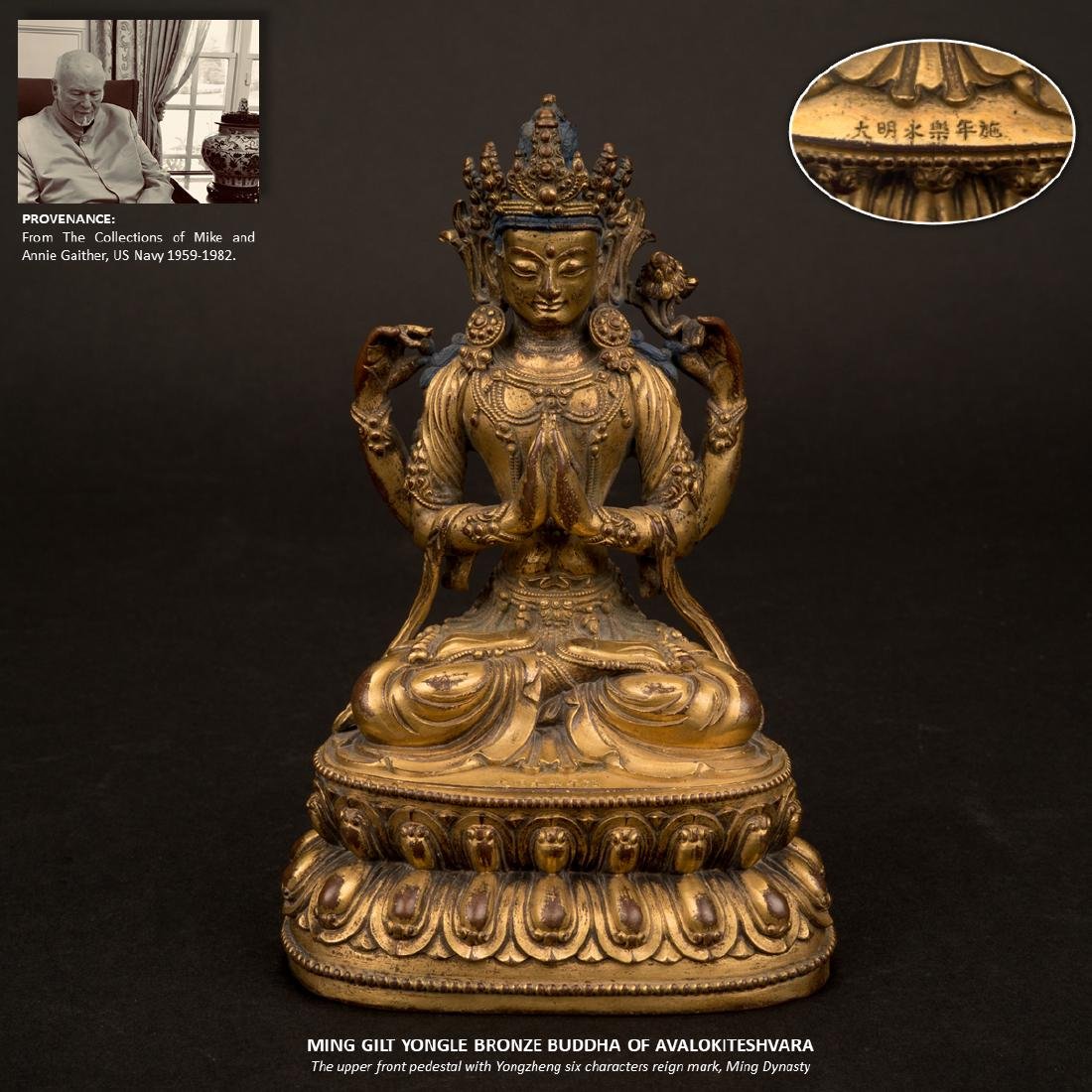 Chinese Tibetan Ming Dynasty Yongle reign period gilt bronze Bodhisattva Buddha figure of Avalokiteshvara Chaturbhuja, the All Seeing Lord with Four Hands. Three Deity Chaturbhuja originating in the Karandavyuha Sutra, also famous for the first use of the six syllable mantra om mani padme hum.
As the nature of all buddhas, Avalokiteshvara, very resplendent, smiling, peaceful and radiant. With four hands the first are folded at the heart, the two raised hands hold a crystal mala and jeweled lotus, two beautiful feet seated in vajra posture, adorned with many attractive silks and jewels, beautified with dark blue hair in tufts and some loose gracefully to the shoulder. On the crown of the head, the wisdom of all Buddhas, is the Lord, source of all refuge gathered as one, in essence the Guru in the aspect of Amitabha, in the manner of the Lord of the Family, seated happily. Extensive trace of gilt remain on surface, with hints of dark-blue pigment on hair. The underside with incised Quatre-foil flori-form petals visvavajra mark surrounded the centralized DaiJi. The upper front pedestal with Yongzheng six characters reign mark, Ming Dynasty.

PROVENANCE:
From The Collections of Mike and Annie Gaither, US Navy 1959-1982. LAUREN Galleries honored to be once again offer the heirloom collections from Mike and Annie Gaither.
With a sense of duty for his country Mike joined the US Navy in 1959 the idea was to see the world and obtain an education that would propel his future. The opportunity to become part of the submarine fleet was compelling and once involved it became his career path of choice. In 1964 he married his lifelong partner Annie Nix. And to this day they are still happily married.
While in the Navy he specialized in communication and electronic repair and was able to obtain the rank of Radioman Chief Petty Officer during his time in the service he supervised crews of up to 25 in high speed communications, repair and records and Department Chief coordinating 8 repair divisions. Analyzing commands to discover systemic difficulties and training to resolve difficulties. Additional fields include intercultural and race relations, Drug and Alcohol training.
With a long career in the Navy his desire to visit many foreign countries was fulfilled.
His desire to be a leader in the open markets directed his path into the pastoral leadership where he was able to train and work with people in Italy Guam Saipan, Northern Marianas Islands, Republic of Palau, with visits to such countries Germany, and Asian Countries. With the opportunity to be in such places also provided the knowledge and ability to obtain collectibles from the area. Reaching a point where one feels that it is time to downsize and realign their assets this has opened the door for others to add these items into their private collection. The quality is exceptional, pristine and highly sought after.


The Collections of Mike & Annie Gaither presented and offered up to auctions from Lot-73 through Lot-88.

Over all in EXCELLENT condition, with normal anomalies in nature, sign of stressed surface, minor scratch & dent. Surface traced wear and or declined to gilding; Normal, considering ages and wears.

All lots are sold as is and where is. Lauren Galleries provides condition reports upon request to aide in your bidding decision. No statement regarding age, condition, kind, value, or quality of a lot, whether made orally at the auction or at any other time, or in writing in this catalog or elsewhere, shall be construed to be an express or implied warranty, representation, or assumption of liability. All sales are final, Lauren Galleries does not give refunds based on condition. Lauren Galleries does not perform any shipping or packing services. We do have a list of suggested shippers who gladly provide quotes prior to your bidding. Please visit our webpage for a list of recommended shippers.

1,698 Followers
Get notifications from your favorite auctioneers.
As Seen On
Shop With Confidence
Since 2002, LiveAuctioneers has made exceptional items available for safe purchase in secure online auctions.
Popular Searches
Artists & Creators
Brands
Style Periods
Origins
Company
Winning
Selling
Â© 2002-2020 LiveAuctioneers. All Rights Reserved.Cookie PolicyTerms & ConditionsPrivacy Policy
This site is protected by reCAPTCHA and the Google Terms of Service and Privacy Policy apply.
BACK TO TOP