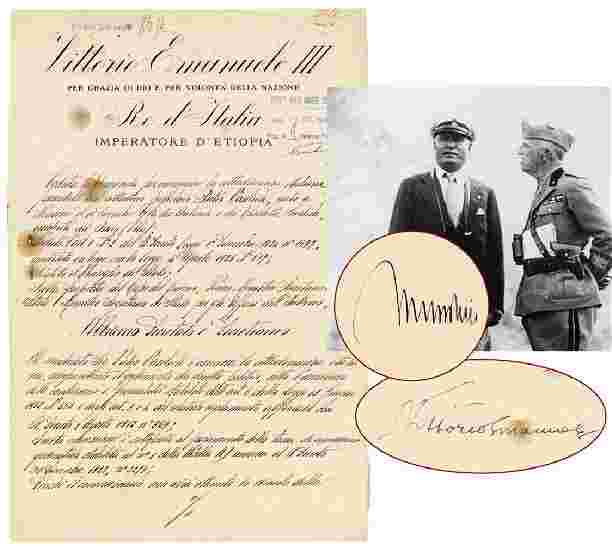 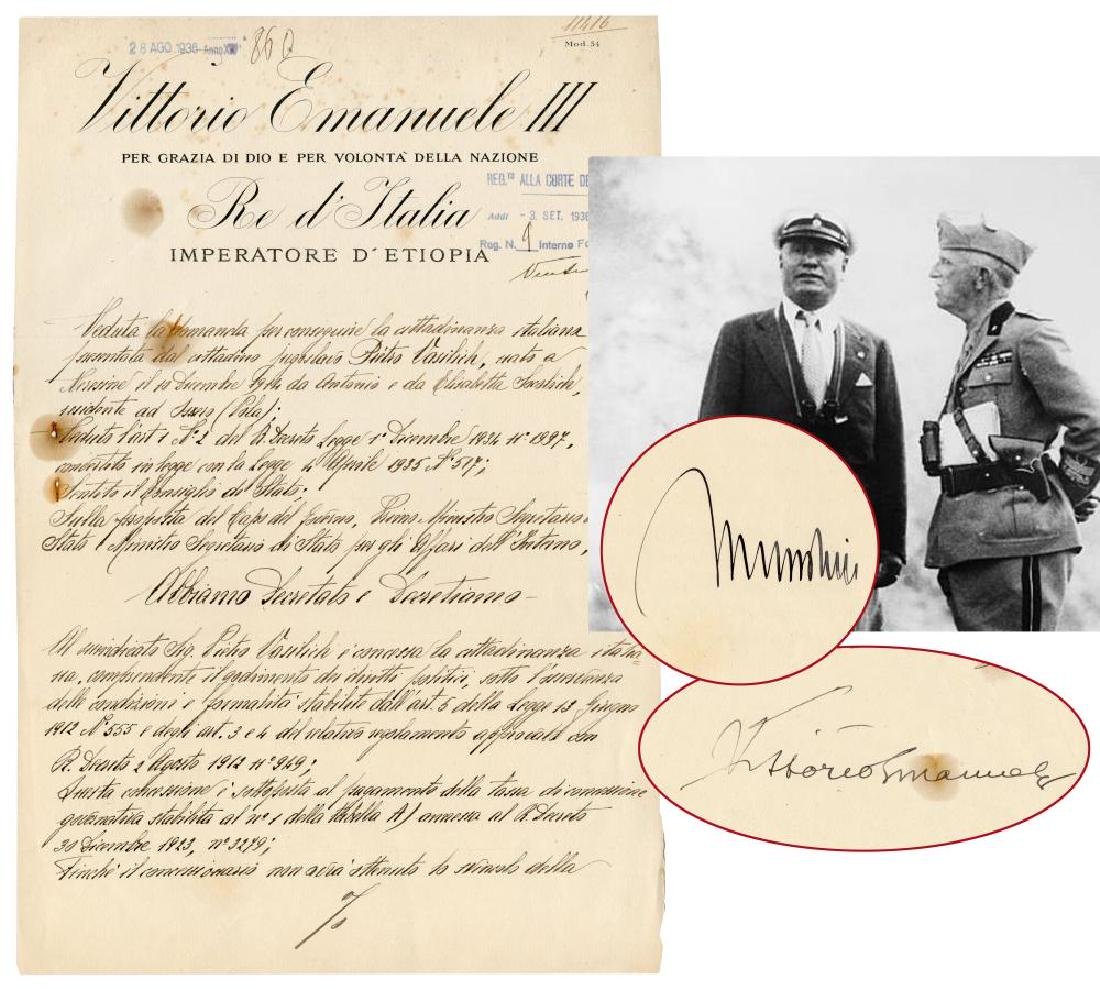 2pp partly printed and partly handwritten document in Italian signed by King of Italy and Emperor of Ethiopia Victor Emmanuel III (1869-1947) as "Vittorio Emanuele" at top verso, and cosigned by Prime Minister and Fascist dictator Benito Mussolini (1883-1945) as "Mussolini" at bottom verso. Both signatures are large, bold, and dark, Victor Emmanuel's measuring 6" x 1.5", and Mussolini's measuring 3.25" x 2.25". Stamped, numbered, and docketed on the first page. The watermarked cream paper has isolated foxing and four small areas of rust discoloration at top recto (one affecting middle of Emmanuel's signature), else very good to near fine. Measures 9.625" x 14.5".

Both the symbolic and the real leader of Italy--Victor Emmanuel III and Benito Mussolini respectively--signed this citizenship document while in Sant'Anna di Valdieri, on the French-Italian border, on August 7, 1936. Italian citizenship was granted to a 22-year-old Yugoslavian man named Pietro Vasilich.

"Victor Emmanuel III, by the grace of God and the will of the nation, King of Italy, Emperor of Ethiopia

In view of the request to obtain Italian citizenship presented by Yugoslavian citizen Pietro Vasilich, born in Nesesine (?) on 10 December 1914 to Antonio and Elisabetta Sorslich, Romanian subjects residing [from near Pula, modern day Croatia…

We have decreed and decree:

The aforementioned Mr. Pietro Vasilich is granted Italian citizenship, including the enjoyment of political rights, under the observance of the conditions and formalities established by Article 5 of the June 13, 1912 law…This concession is subject to the payment of the tax established in No. 1 of table A annexed to the December 30, 1923 Royal Decree…".

Victor Emmanuel III officially ruled as King of Italy between 1900-1946, although he essentially served as a puppet king to Fascist dictator Benito Mussolini between 1925-1943. Victor Emmanuel III also claimed sovereignty over Albania and Ethiopia during World War II. Today, Victor Emmanuel is criticized for accommodating Mussolini and the rise of the Fascists in Italy. Yet the king's ability to withstand so many tumultuous political changes during his reign certainly demonstrates his shrewdness and tenacity.

Benito Mussolini, a former war veteran and right-wing journalist, had become leader of Italy's National Fascist Party after World War I. He was appointed Prime Minister in 1922, a title that he would hold until his dismissal in 1943, but in reality, he served as a de facto dictator between 1925 and his dismissal in 1943. Under Mussolini, Italy and its one-party political system devoted itself to recapturing the lost glories of the Roman Empire. Secret police, propaganda, and strict state regulation of all aspects of life ensured almost universal compliance.

1,591 Followers
Get notifications from your favorite auctioneers.
As Seen On
Shop With Confidence
Since 2002, LiveAuctioneers has made exceptional items available for safe purchase in secure online auctions.
Popular Searches
Artists & Creators
Brands
Style Periods
Origins
Company
Winning
Selling
© 2002-2020 LiveAuctioneers. All Rights Reserved.Cookie PolicyTerms & ConditionsPrivacy Policy
This site is protected by reCAPTCHA and the Google Terms of Service and Privacy Policy apply.
BACK TO TOP