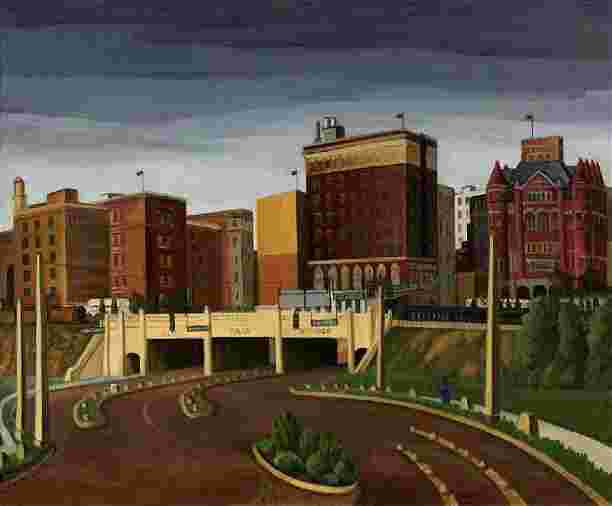 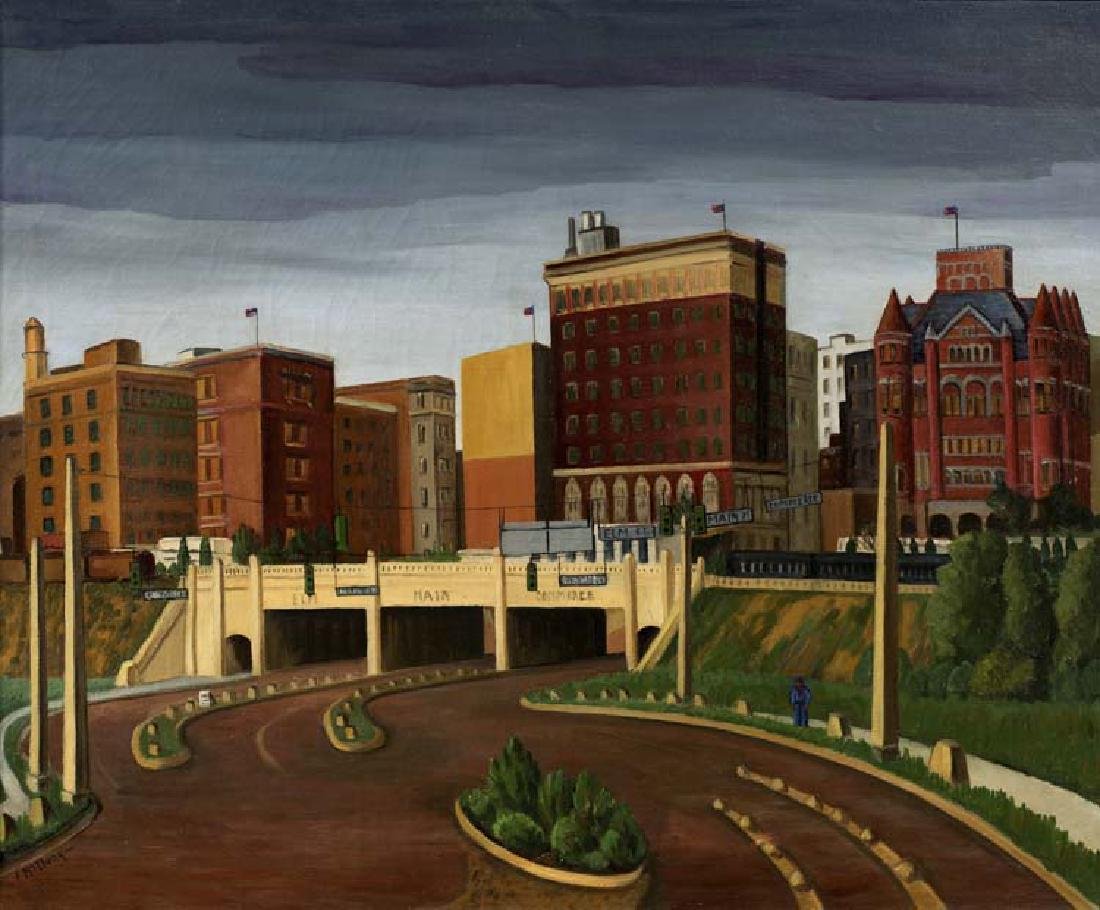 Of This Vast State: Women Artists of Texas, 1900-1960, 2007 at The Women's Museum, Fair Park Dallas, it was also illustrated in the exhibition brochure for that show

Florence McClung painted Triple Underpass in 1945, by which time she had secured a national reputation as both a painter and a printmaker. The acquisition of one of her paintings by the Metropolitan Museum of Art in early 1940, elevated her stature among the Texas Regionalists, who had been forging an original style dedicated to their local environment for nearly a decade. Triple Underpass is now back in Dallas for the first time in nearly 30 years.

Triple Underpass portrays an elevated view of Dallas' western facade with the eponymous landmark as the focal point. Historically important as a major engineering achievement of its time and for its location at the western edge of Dealey Plaza (the site of the city's birthplace in the 1840s), the Triple Underpass was constructed between 1934 and 1936 as both a railroad bridge and a point of convergence for Elm, Main and Commerce streets to improve vehicular traffic into the city's business district. It is internationally recognized today for its emotional link to President Kennedy's assassination in 1963. This is the only known painting of the Triple Underpass prior to his assassination.

McClung's image speaks to the clarity and particularity of Dallas's cityscape. The view is compressed but carefully orchestrated to record the massing and fenestration of buildings, such as the Texas School Book Depository, the Dallas County Records Building, and the Old Courthouse. Her close attention to the distinctive character of each edifice reflects civic pride for the city's modernity and historic past. As evident by the numerous American flags waving from the rooftops, McClung has also imbued the scene with an overarching sense of patriotism for the nation's military prowess in the waning months of World War II.

In the Triple Underpass's streamlined features, McClung found not only the perfect subject to assert her stylistic affinity for Art Deco industrial design, but also an image to counter the perception of her as an artist solely dedicated to the vernacular landscape. Interestingly, for a painting ostensibly about a vehicular thoroughfare, she chose not to include automobiles. Instead, a lone pedestrian appears on the sidewalk at right, as if to underscore the point that regardless of the subject's natural or fabricated elements, McClung intended her art to speak to the relationship of man to the environment.

McClung included Triple Underpass within a body of mostly new work in oil and pastel that she selected for her second solo exhibition at the Dallas Museum of Fine Arts, held in March 1945. Patricia Peck, reviewing the show for the Dallas Morning News, acknowledged her preference for the earthy grandeur of the artist's generalized landscapes, failing to recognize in the actuality of McClung's cityscapes, an evocation of man-made beauty. - Rebecca Lawton

584 Followers
Get notifications from your favorite auctioneers.
As Seen On
Shop With Confidence
Since 2002, LiveAuctioneers has made exceptional items available for safe purchase in secure online auctions.
Popular Searches
Artists & Creators
Brands
Style Periods
Origins
Company
Winning
Selling
Â© 2002-2020 LiveAuctioneers. All Rights Reserved.Cookie PolicyTerms & ConditionsPrivacy Policy
This site is protected by reCAPTCHA and the Google Terms of Service and Privacy Policy apply.
BACK TO TOP