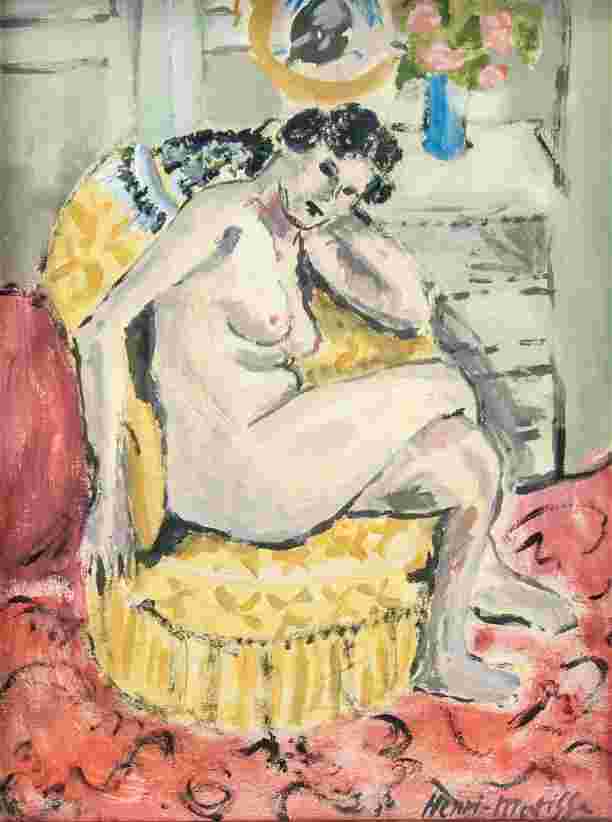 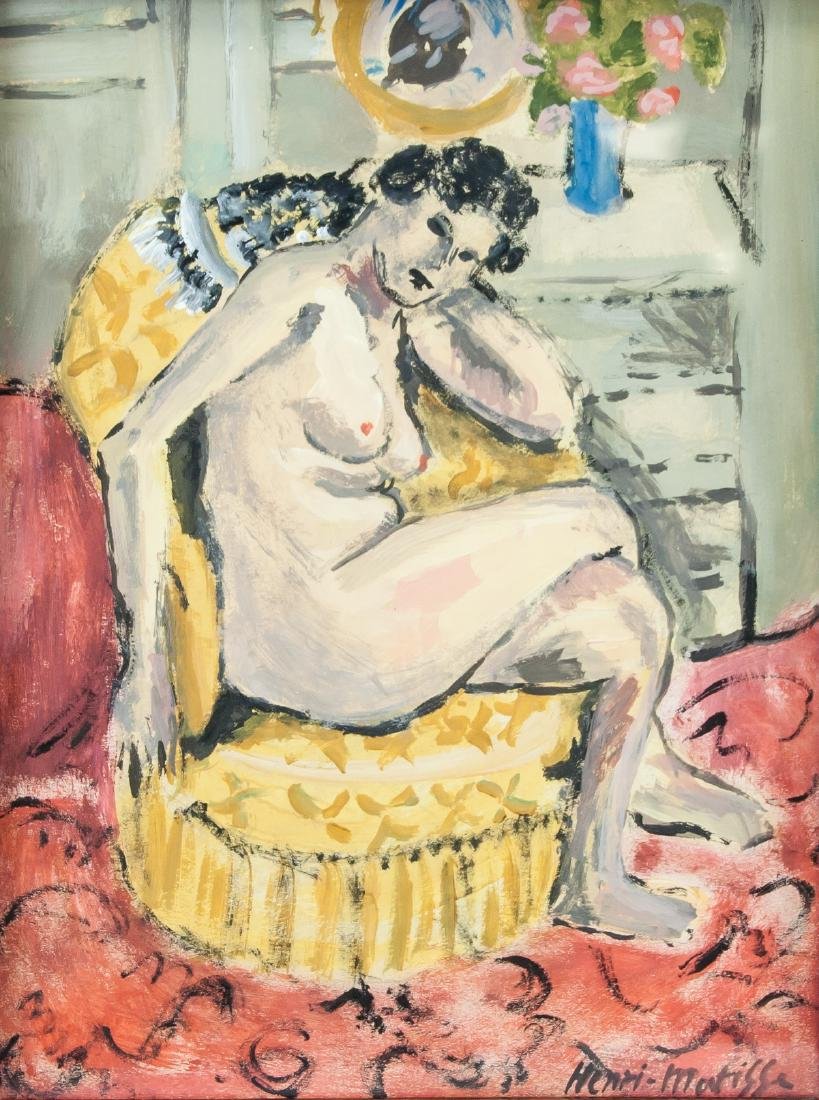 Gouache and tempera on paper, framed. Featuring a female nude. French Fauvist Post-Impressionist School, signed Henri Matisse on the lower right corner, with seal on verso. 24.5 x 18.5 cm (10 x 7.3 inches). Frame size: 32 x 25.5 cm (12.6 x 10 inches). Henri Matisse was one of the most influential French artists of the 20th century. Matisse’s lyrical colors, inventive figuration, and use of decorative patterns helped redefine many of the formal tenets of painting. “What I dream of is an art of balance, of purity and serenity, devoid of troubling or depressing subject-matter,” he once said. Born Henri-emile-Benoît Matisse on December 31, 1869 in Le Cateau-Cambresis, France, he took to art relatively late in life after initially pursuing law. First studying painting under Gustave Moreau at the ecole des Beaux-Arts, he soon adopted the Pointillist ideas espoused by Georges Seurat and Paul Signac. With Pointillism as a point of departure, Matisse along with Albert Marquet and Andre Derain, developed a radical method of using pure color to express light, in what became known as Fauvism. Matisse would return to a style which incorporated both naturalistic and decorative elements, as evinced in his painting Goldfish (1911). In the decades that followed, the artist spent much of his time in the South of France, painting models dressed as odalisques and ocean views from his hotel room. Late in his career, while bed-ridden and unable to paint, Matisse produced a number of cutout paper works such as Blue Nude II (1952). The artist died on November 3, 1954 in Nice, France. His experimentation with flat areas of unmodulated color was a major source of inspiration for Milton Avery, Richard Diebenkorn, and David Hockney. Today, Matisse’s works are held in the collections of the Hermitage Museum in St. Petersburg, the Musee d’Orsay in Paris, The Museum of Modern Art in New York, and the National Gallery in London. PROVENANCE: Southern Ontario estate. PROVENANCE: Southern Ontario estate.

4,188 Followers
Get notifications from your favorite auctioneers.
As Seen On
Shop With Confidence
Since 2002, LiveAuctioneers has made exceptional items available for safe purchase in secure online auctions.
Popular Searches
Artists & Creators
Brands
Style Periods
Origins
Company
Winning
Selling
Â© 2002-2020 LiveAuctioneers. All Rights Reserved.Cookie PolicyTerms & ConditionsPrivacy Policy
This site is protected by reCAPTCHA and the Google Terms of Service and Privacy Policy apply.
BACK TO TOP