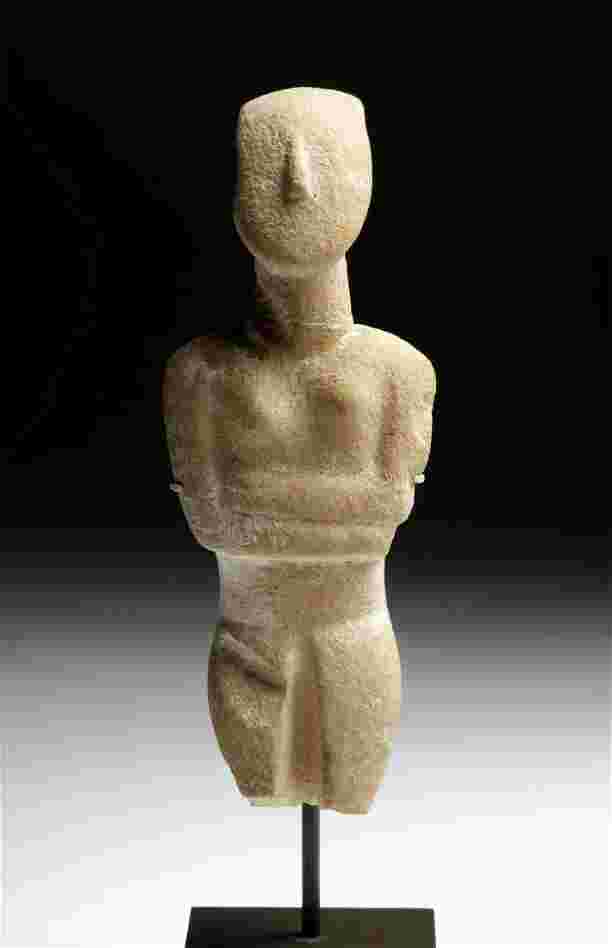 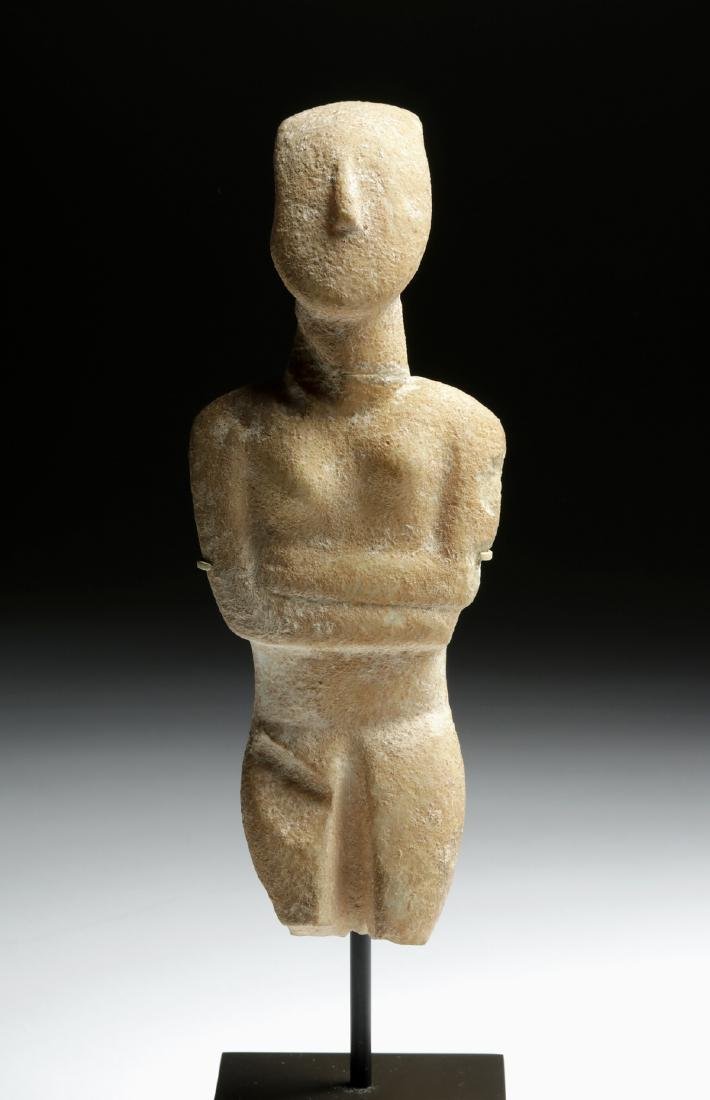 Ancient Greece, Cyclades, Early Spedos, ca. 2600 to 2500 BCE. Finely carved from marble, a reclining female figure with her arms crossed, typical of the sculpture of the Cyclades in the mid-2000s BCE known as the Spedos variety, this name derived from an Early Cycladic cemetery on the island of Naxos. This canonical type is characterized by an elongated slender body with folded arms, a lyre- or U-shaped head, and a deeply incised cleft between the legs. The anatomical details are characteristically minimized presenting an abstract, geometric quality. Incisions on the body delineate the arms crossed over the chest, and define the abdomen, pubic triangle, and spine. The breasts are gently rendered as well. On the face, the low relief nose is pronounced, and it is possible that other details originally may have been delineated with brightly colored pigments. When viewed from the side, the back is straight and continues the line of the neck, while the head is dramatically arched and the legs flex forward. Size: 7.25" H (18.4 cm); 9.625" H (24.4 cm) on included custom stand.

According to the curatorial team at the Getty, "The role and meaning of these figures in Cycladic culture is unknown. As the majority of figures are female, and are represented nude, with breasts and incised public triangles to indicate their gender, they may be linked with the idea of fertility and reproduction, which was often a focus of ancient Mediterranean religions. While these figures have been found almost exclusively in graves placed on their backs, it is not clear whether they were made specifically for burials. On some examples, the painted decoration has been refreshed, suggesting that the images were in use for a long period of time before being buried. Additionally, a few examples also come from sanctuaries, and would have served a ritual function. Since they could not stand, they may have been held upright in social or religious activities, such as processions."

According to the Christies Lot Essay, "It has been suggested that the grooves at the neck and upper right thigh of the present lot may be the result of deliberate damage in antiquity. Some Cycladic figures have been discovered in graves purposefully broken, at the neck and at the knees, with the three parts of the figure then carefully arranged. This sort of damage most likely had a ritual context, though its precise meaning is still unknown. Thimme has suggested that Cycladic female figures 'were conceived as images of divine beings and specifically intended for the grave: the female figures represent a divine mistress of life and death, who will secure for the deceased rebirth in another world' - it is not apparent what benefits would be reaped by deliberately damaging a figure imbued with such potent power (O. Höckmann, 'Cycladic Religion', in J. Thimme (ed.), Art and Culture of the Cyclades, Chicago, 1977, p. 42)."

Old chips to neck, left arm, right shoulder, right hip and knee as shown. Lower legs missing. Head reattached at the neck. This said, scholars believe that such figures were purposefully broken during antiquity. (See discussion of this in Christies lot essay mentioned in our description.) Normal surface abrasions. Nice earthen/mineral deposits that have developed over the ages.

4,861 Followers
Get notifications from your favorite auctioneers.
As Seen On
Shop With Confidence
Since 2002, LiveAuctioneers has made exceptional items available for safe purchase in secure online auctions.
Popular Searches
Artists & Creators
Brands
Style Periods
Origins
Company
Winning
Selling
Â© 2002-2020 LiveAuctioneers. All Rights Reserved.Cookie PolicyTerms & ConditionsPrivacy Policy
This site is protected by reCAPTCHA and the Google Terms of Service and Privacy Policy apply.
BACK TO TOP