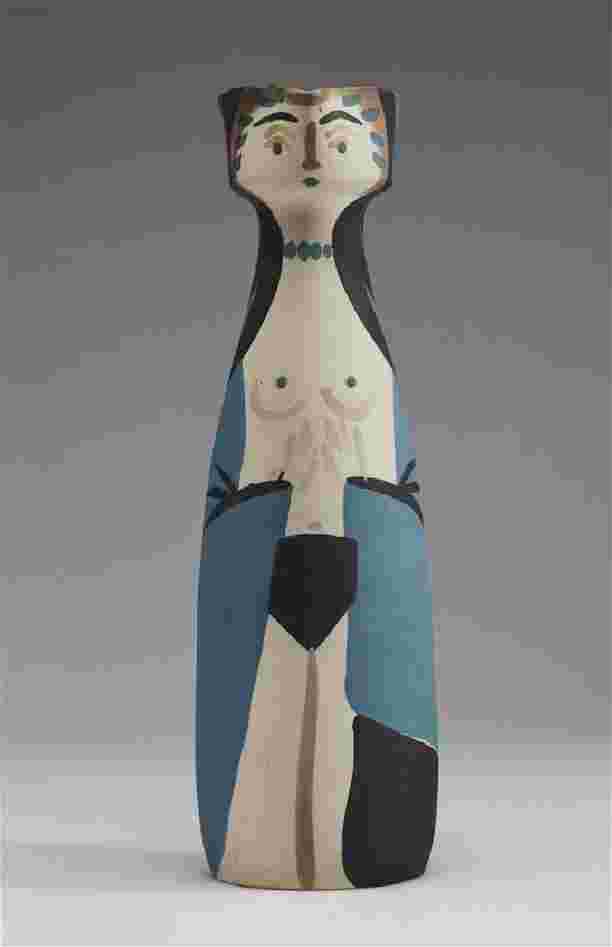 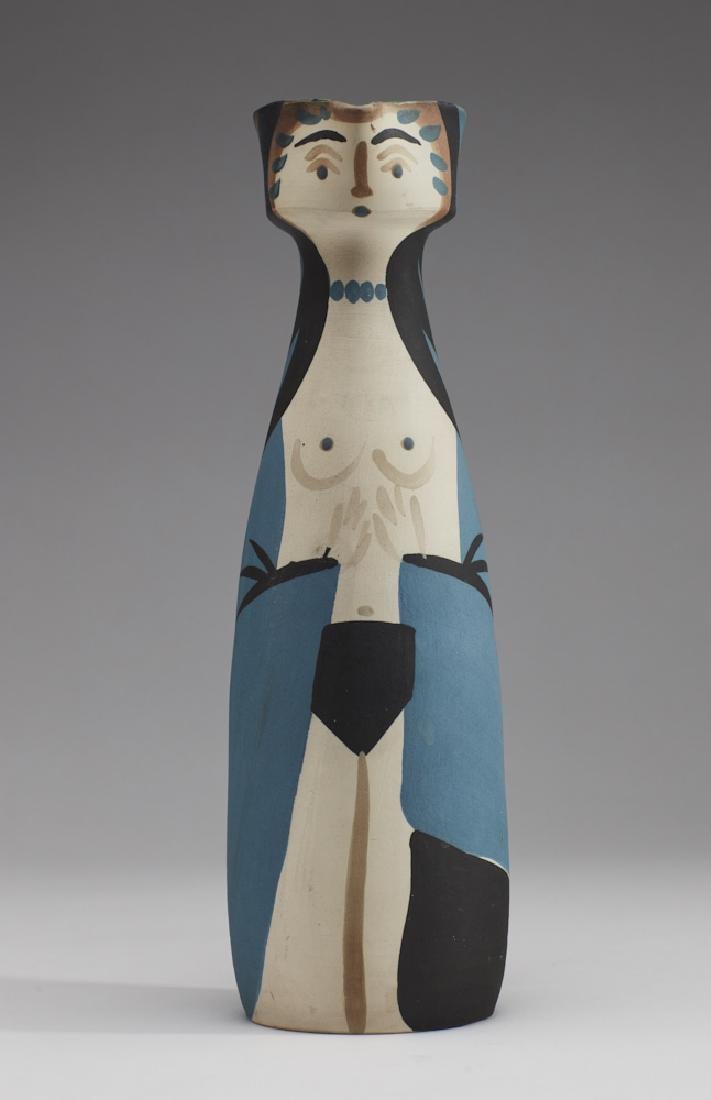 From Askart: A painter and printmaker who revolutionized western art, Pablo Picasso was born in Spain and lived most of his life either there or in France. His father was an art teacher, and the young Pablo grew up in an artistic environment. By the age of fourteen, he was an accomplished draftsman, and in 1900 at age nineteen, he made his first trip to Paris. There he studied the Old Masters and Classical sculpture and also was exposed to the paintings of Impressionists and Post Impressionists. Between 1901 and 1904, his work was dominated by a blue palette, which has led to this time being called his "Blue Period". Blue, for him, was to symbolize the ". . . suffering-frequently hunger and cold, the hardships he experienced while attempting to establish himself." (Arnason, 125) By 1905, his 'Rose or Circus Period' was beginning, and also later that year, he became doing painting reflective of a growing interest in African masks. By 1907, he painted what is regarded as his first masterpiece and as the first Cubist painting, Les Demoiselles d'Avignon. Although he said: "I think about Death all the time. She is the only woman who never leaves me." (Walther) His relationships with 'live' women influenced much of his artwork. It is thought that his switch from 'blue' to 'rose', that is from depression to happiness, was determined by his meeting Fernande Olivier, allegedly his first serious female relationship. He lived with her for seven years. From that time, he did numerous portraits of wives, children and mistresses. In 1908, Picasso began working in Paris with Georges Braque (1882-1963), and together until 1914 and the beginning of World War I, they created collages* and the first phase of Cubism* that included still life and portraits. They worked so closely together that many scholars are unable to tell some of their work apart or to determine which of them contributed certain concepts. Picasso went to Rome from 1914 to 1918 to do set designs and costumes for the Russian Ballet and during this time also did some realistic painting and drawing, and printmaking emerged as a major part of his art as a result of the time he spent drawing. His graphic art, which actually dated to 1905, was diverse as he was ever looking for new modes of expression, and he did etchings, drypoint, linocuts, woodcuts, aquatints and sometimes combinations. In Rome, he met his first wife, Olga Koklova, a Russian ballet dancer. In the early part of the 1920s, he did abstract figurative work that was so grotesque in distortion that it set the stage for his participation in Surrealist* exhibitions in Europe. Also the experimentation with figurative shapes led him to sculpture, an interest he had expressed earlier. The 1920s are regarded as one of the most productive periods of Picasso's career. He did paintings with vivid coloration expressing his ". . .total experience of curvilinear cubism and classical idealism." (Arnason, 393) In 1927, he began a relationship with seventeen-year-old Marie Therese Walther, and in 1936 with Dora Maar, a photographer. In 1937, inspired by the Spanish Civil War, he painted Guernica; this is regarded as one of his landmark paintings and certainly one that carried a strong message of human suffering during wartime. During the World War II years, Picasso did a lot of modeling in clay and creating of assemblages with found objects, and many of the pieces, especially after the War, expressed his sense of humor. Also after the War, he began creating with ceramics, and he was very productive with printmaking. His female companion, beginning 1943, was Francoise Gilot, a painter, with whom he had two children, Claude and Paloma. His last female relationship was with Jacqueline Roque, whom he met in 1953 and married in 1961. Pablo Picasso died on April 8, 1973 at the age of 91. The last eight years of his life had been difficult because of prostate problems, but he continued to be productive. Of him, it was written in Time magazine, May 26, 1980: "To the end . . . Picasso remained Picasso; an indefatigable worker, a lover of mischief and pranks, quirky, increasingly aloof, mercurial, yet often remarkably generous and warm."