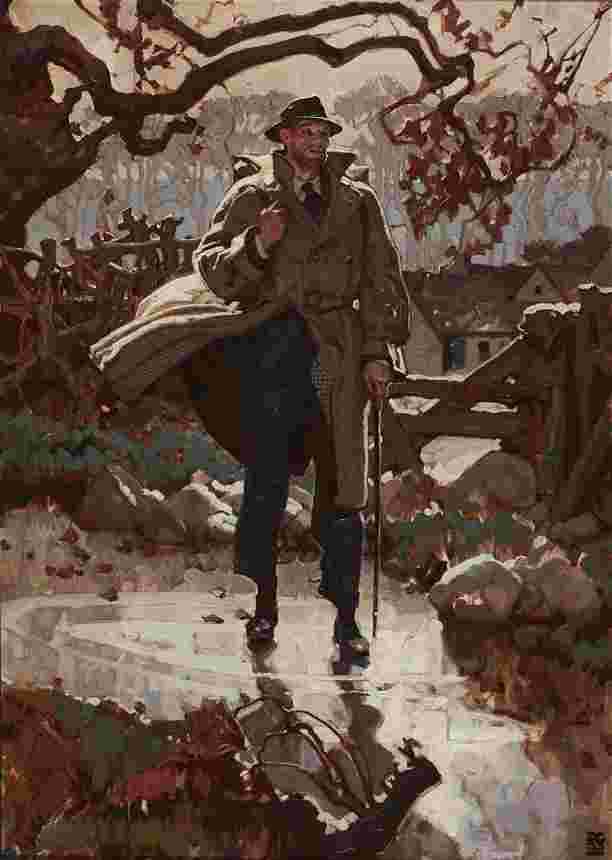 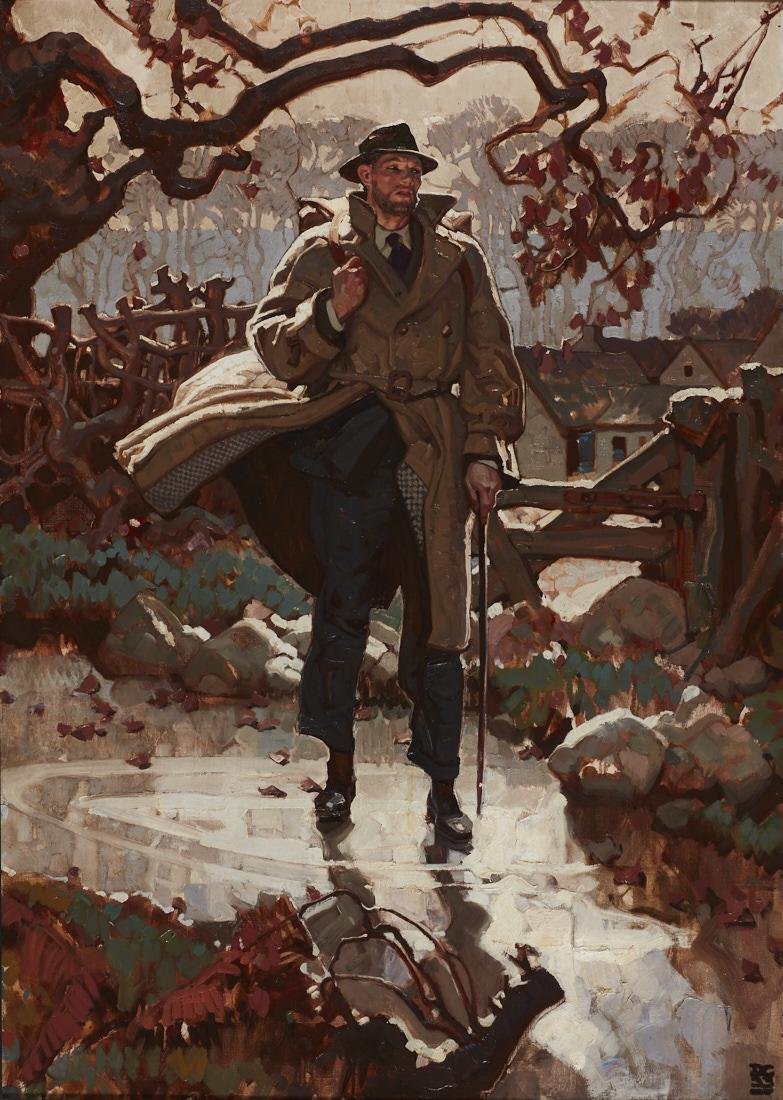 Dean Cornwell (American, 1892-1960) oil on canvas painting. The 1933 Traveler oil painting , demonstrates the artist's exceptional brushwork and ability to capture the elements of a composition within a limited space. The assertive use of color gives the viewer a strong sense of atmosphere and light. The painting most likely was used for illustration in of one of the finest magazines and likely was published in; Harper's Bazaar, Cosmopolitan, Redbook, Good Housekeeping, or The American Magazine. A photo-copy image of the painting used as an illustration is included with the painting. The painting is signed in the lower right; DC 33. Measures 42 inches high, 30 inches wide. Frame measures 44 inches high, 32 inches wide. There are three old patches on the reverse, one by front trouser leg and two near bottom. Otherwise in good condition. The last image below shows the painting used as an illustration.

From AskArt: Dean Cornwell (March 5, 1892 - December 4, 1960) was an American illustrator and muralist. His oil paintings were frequently featured in popular magazines and books as literary illustrations, advertisements, and posters promoting the war effort. Throughout the first half of the 20th century he was a dominant presence in American illustration. At the peak of his popularity he was nicknamed the "Dean of Illustrators". Cornwell was born in Louisville, Kentucky. His father, Charles L. Cornwell, was a civil engineer whose drawings of industrial subjects fascinated Cornwell as a child. He began his professional career as a cartoonist for the Louisville Herald. Soon thereafter he moved to Chicago, where he studied at the Art Institute and worked for the Chicago Tribune. In 1915 he moved to New Rochelle, New York, a well known artist colony,[2] and studied in New York City under Harvey Dunn at the Art Students League of New York. Eventually he traveled to London to study mural painting as an apprentice to Frank Brangwyn. Like so many other illustrators of note, Dean attended the Art Students League in New York in 1915, where he met Charles Chapman and studied under Harvey Dunn, a disciple of Howard Pyle. Harvey Dunn proved to be a great influence on Cornwell in respect to color theory and composition. Dean was lucky enough to also study under the notable Frank Brangwyn, an English muralist of worldwide fame. By the 1930's and 40's, Dean Cornwell was known as the 'Dean of Illustrators,' his patriotic images and war posters were everywhere as were his advertisements for these blue chip companies; Seagrams, Palmolive Soap, Scripps-Howard newspapers, Coca-Cola, and General Motors. Paintings by Cornwell have been exhibited in the Whitney Museum of American Art, the Pennsylvania Academy of the Fine Arts, the Chicago Art Institute and the National Academy of Design. He taught and lectured at the Art Students League in New York City and at museums and art societies throughout the United States. James Montgomery Flagg paid him a great tribute when he said, "Cornwell is the illustrator par excellence-his work is approached by few and overtopped by none...he is a born artist."