A Roman Marble Head of an Athlete
See Sold Price 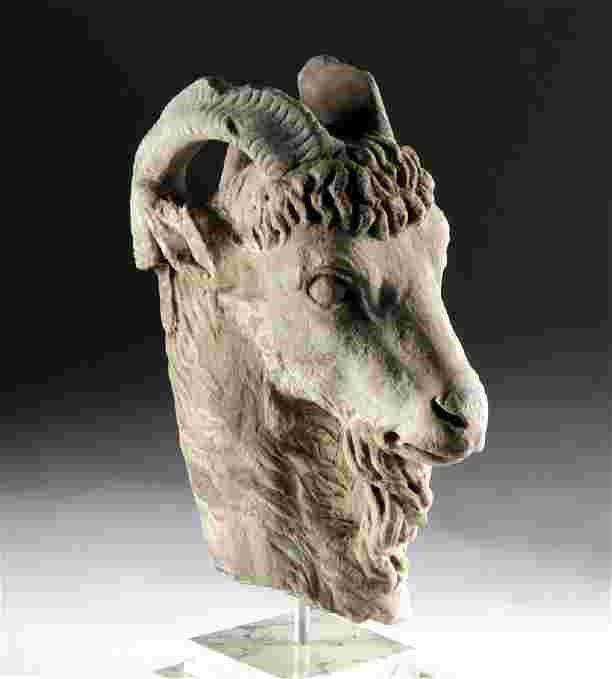 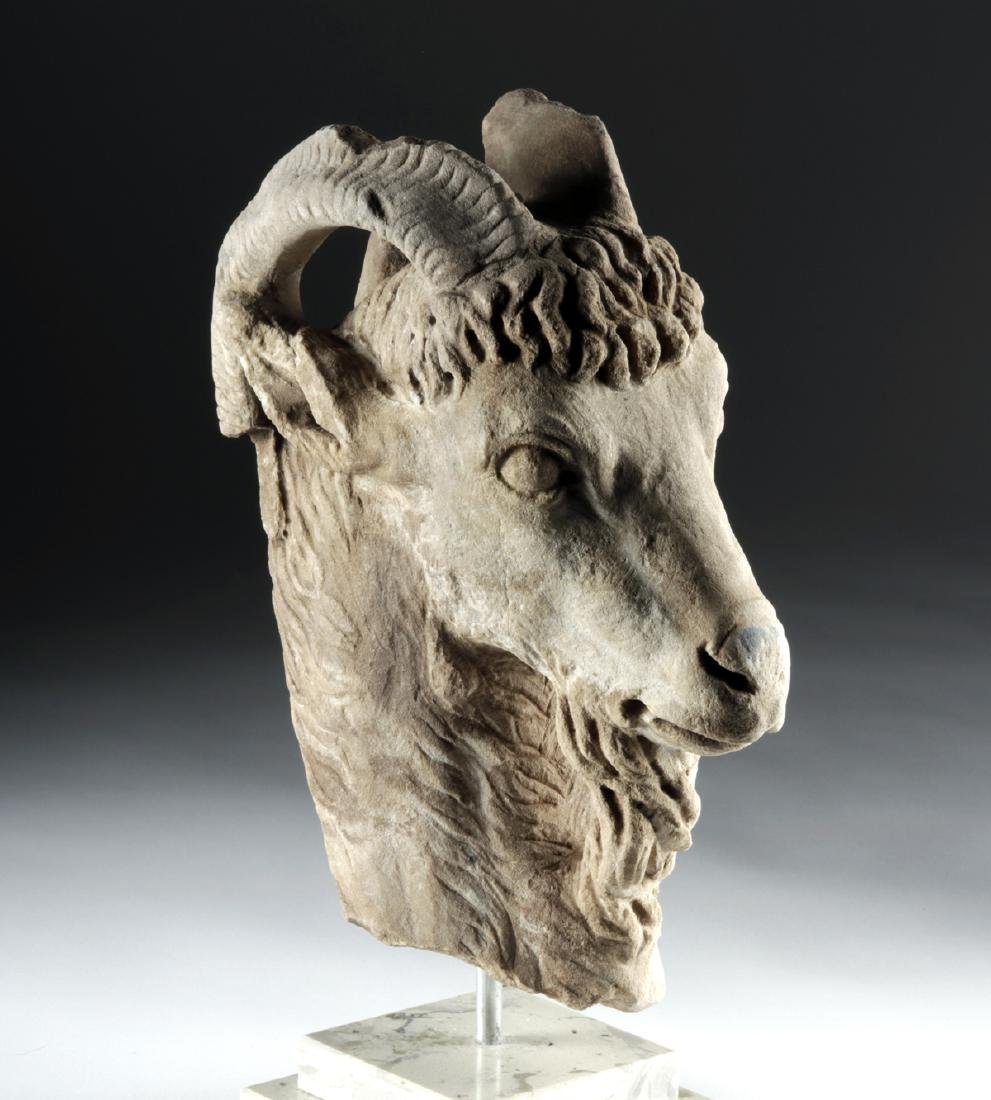 Roman, early Imperial Period, ca. 1st century CE. Wow! A stunning marble goat head, carved with full lifelike details: large eyes that would once have been painted, recessed within thick eyelids, on a face carved with clear musculature, a strong snout, a forelock, goatee, and neck hair, large, pointed ears that are back on the head, and huge, curved, striated horns that rise from the top of the head to rest against the back of the neck. Age has given the marble a banded appearance, wearing away the original pigment that would have been applied to the stone but revealing the weathered color of the rock beneath. Size: 8.5" W x 11.7" H (21.6 cm x 29.7 cm); 15" H (38.1 cm) on included custom stand.

Goat statuary in the classical world, especially in early Imperial Rome, was associated with the god Bacchus (Dionysus), god of wine and nature, and with the revels of the satyrs. Some of the most famous depictions of these animals come from Hadrian's villa near modern-day Tivoli. One (see below) is a goat's head from a larger statue; another is the so-called Fauno rosso, a statue in red marble that depicts a drunken satyr with a goat looking up at him. This goat head probably graced a similar statue.

A similar goat's head was found at Hadrian's villa and is now at the British Museum (it was restored in the 18th century): https://www.britishmuseum.org/research/collection_online/collection_object_details.aspx?objectId=460135&partId=1&searchText=marble+goat+roman&images=on&page=1; a goat head in similar condition sold at Christie's London in 2017 for 32,500 GBP (42,400 USD): https://www.christies.com/lotfinder/Lot/a-roman-marble-head-of-a-goat-6084703-details.aspx

Provenance: private Texas, USA collection, acquired in 1929 in Greece by P. Nascou (great-grand daughter), who purchased it from Georgios Papoutsakis

All original and unrestored. Central part of one horn is lost. Small portions of the other horn are also lost. Small chips and scratches from surface commensurate with age. Piece is obviously a fragment from a larger sculpture, with an old break along the lower neck. Deposits on surface. Excellent preservation of many of the details.

4,861 Followers
Get notifications from your favorite auctioneers.
As Seen On
Shop With Confidence
Since 2002, LiveAuctioneers has made exceptional items available for safe purchase in secure online auctions.
Popular Searches
Artists & Creators
Brands
Style Periods
Origins
Company
Winning
Selling
Â© 2002-2020 LiveAuctioneers. All Rights Reserved.Cookie PolicyTerms & ConditionsPrivacy Policy
This site is protected by reCAPTCHA and the Google Terms of Service and Privacy Policy apply.
BACK TO TOP