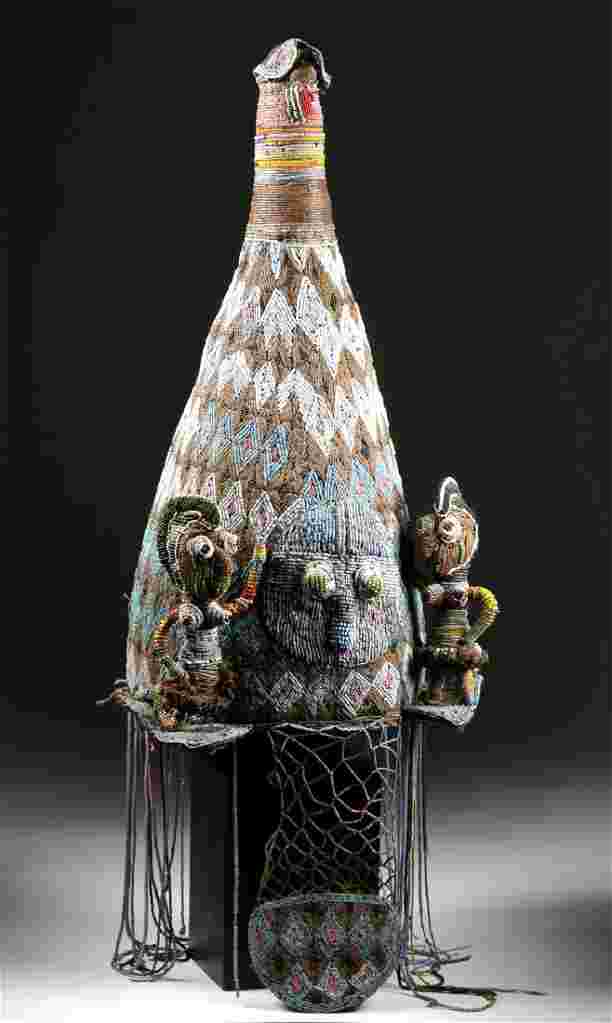 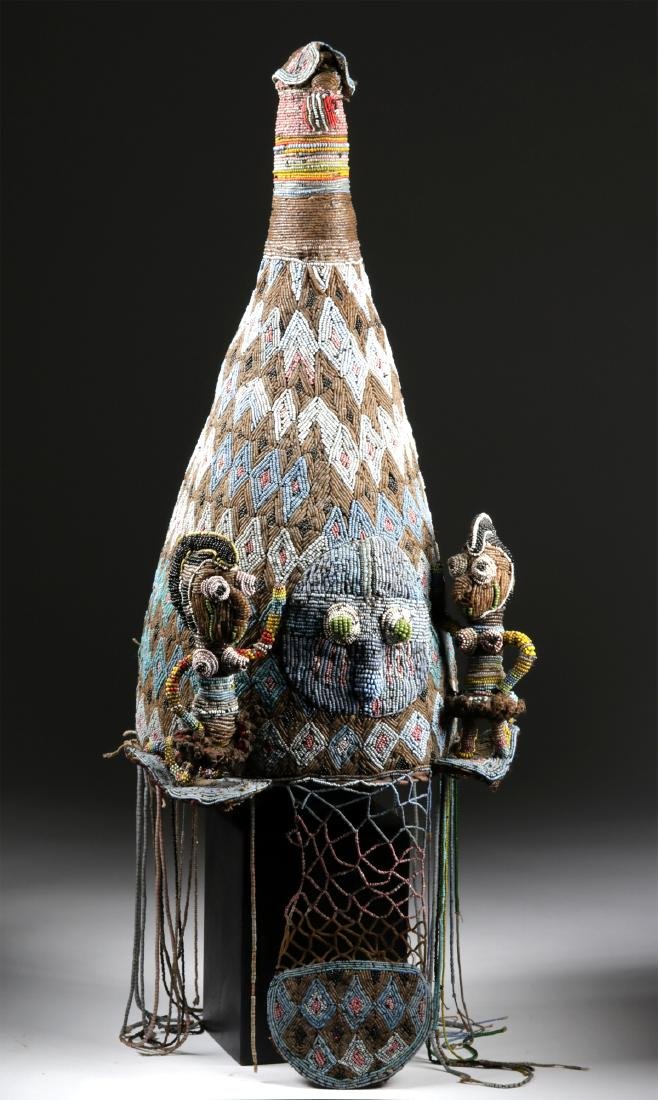 West Africa, Nigeria, Yoruba, ca. 1960 CE. A wonderful beaded crown (ade) created for a Yoruba oba or king - of a classic conical form with a removeable bird finial atop, two attached kneeling female figures flanking a relief visage on one side, a third figure standing atop a flap on the opposite side, a beaded veil serving to cover the royal's visage, and additional beaded strands trimming the remainder. Most of the crown's body is covered with bands of repeating diamond motifs in shades of blue, brown, and pink. The upper point is adorned by horizontal strands of pink, blue, brown, yellow, and orange beads. Blue beads were particularly coveted, because the color could not be created from natural sources. In addition, this crown is lined with Ashoke cloth of wine, gold, and chocolate brown hues. Size: 13.5" W at widest point x 36" H including veil and trim (34.3 cm x 91.4 cm)

See a similar beaded crown in the Brooklyn Museum collection - https://www.brooklynmuseum.org/opencollection/objects/4813. According to the curatorial team, "Worn by an oba, or king, this crown with its beaded veil serves to depersonalize the man and instead emphasizes his office. It also protects onlookers from the danger of casting their eyes directly upon the divine presence of the oba."

Despite the fact that the Yoruba have a long history of glassmaking, the beads used to make this crown may have been imported from the British during the late 19th century. During this period, glass beads signified high status and substantial wealth. Such petite European "seed beads" were thought to be particularly special, due to their uniform size and wide variety of colors.

Provenance: private Poos collection, Overland Park, Kansas, USA; purchased directly from the artist in 2010 - One of the largest privately held quilt and textile collections in the world, the Poos Collection has evolved over 50 years and through extensive travels to allow for original or point of source acquisition. The collection includes international textiles and garments with an emphasis on West African textiles such as adire, aso oke, kente, and ewe woven prestige cloths.

Some missing beads and losses to singular strands around the periphery. Otherwise excellent.

4,833 Followers
Get notifications from your favorite auctioneers.
As Seen On
Shop With Confidence
Since 2002, LiveAuctioneers has made exceptional items available for safe purchase in secure online auctions.
Popular Searches
Artists & Creators
Brands
Style Periods
Origins
Company
Winning
Selling
Â© 2002-2020 LiveAuctioneers. All Rights Reserved.Cookie PolicyTerms & ConditionsPrivacy Policy
This site is protected by reCAPTCHA and the Google Terms of Service and Privacy Policy apply.
BACK TO TOP