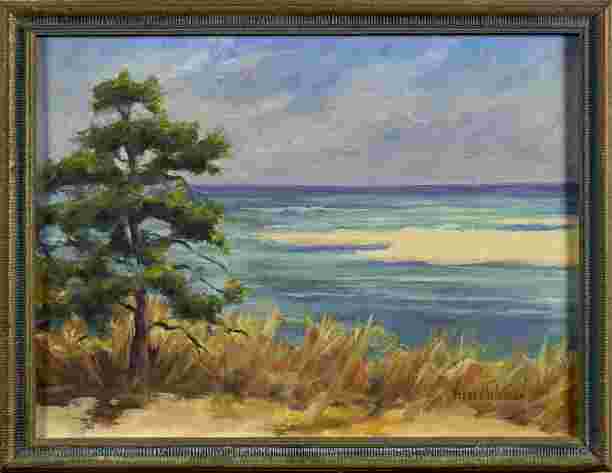 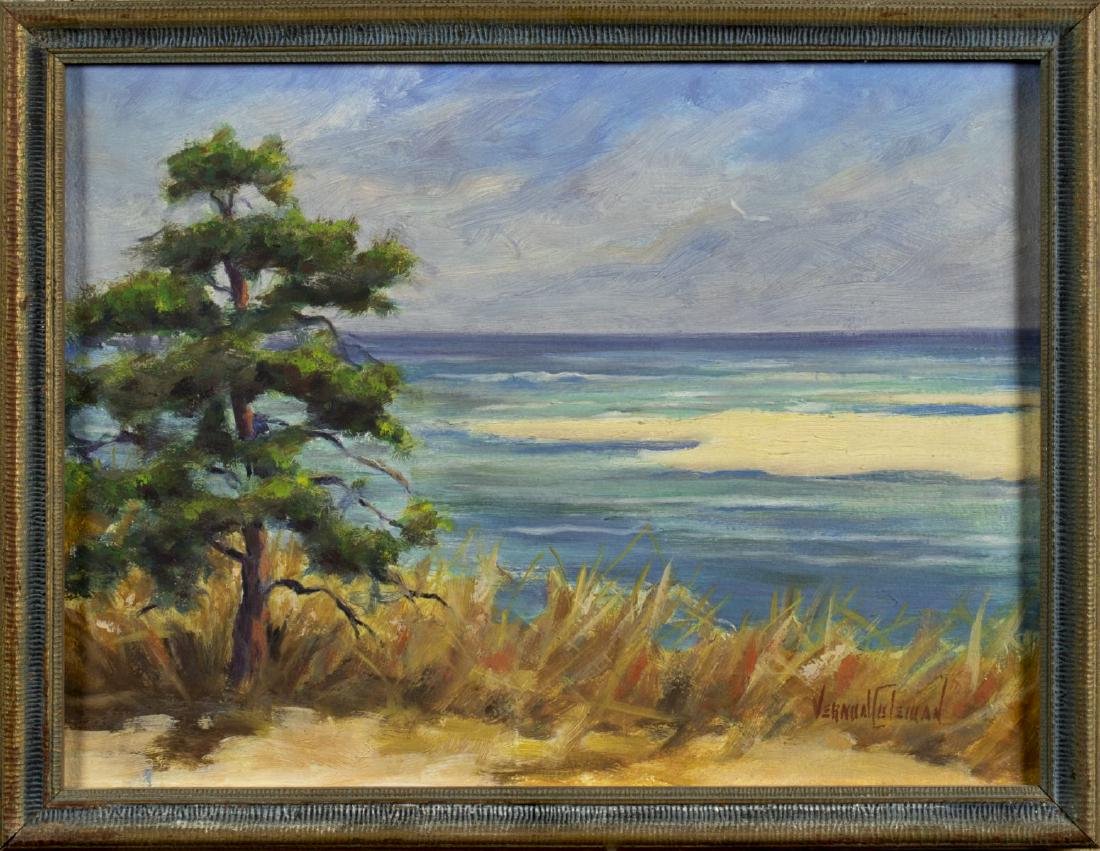 Vernon Herbert Coleman (Massachusetts, Connecticut, 1898 - 1978)
Vernon H. Coleman 'spent much of his life here in Barnstable, descended from people who lived in the Hyannis area, and knew a lot of people' as a driver for his dadâ€™s bakery, according to his son, Vernon E. Coleman of Marstons Mills. The elder Colemanâ€™s art is being celebrated at the Cape Cod Museum of Art in Dennis through Jan. 11.
When the son gave a gallery talk at the museum, the audience included not only a former student of Coleman, but also former classmates of his son.
Vernon H. Coleman (1898-1978) was an educator in the Barnstable school system for 22 years until his retirement in the mid-1960s.
Publicity for the program notes that the elder Coleman, nicknamed 'Van,' painted more than 100 murals for the Works Progress Administration, which created jobs for artists during the Great Depression of the 1930s.
A theater buff since childhood, he was also a set designer for the Mary Young Theatre in Centerville, the Comedy Club in Barnstable Village, and the Little Theatre in South Yarmouth. He even worked in theater in New York City for a while, and owned a miniature theater complete with lights and lighting board to try out ideas.
"He was a great dad," declared Vernon E. Coleman, who said his father taught him chess and photography. The elder Coleman and a friend who was retired from the Navy invented a way to take aerial photographs from a camera attached to seven-foot-wide kites.
Vernon H. Coleman loved to paint ships. "He could watch the ocean for hours," his son recalled at the museum, pointing out one of his fatherâ€™s sloops as his personal favorite.
The museum is also displaying a still life with bookends, accompanied by the actual bookends in the art. 'I really remember these in our house,' said the artistâ€™s only child.
Joe MacQuade, an antiques dealer from East Dennis, was one of Colemanâ€™s students and says that the artist guided his classes gently. "He would suggest by saying, â€˜Why donâ€™t youâ€¦,â€™' MacQuade recalled. 'and he always had a ship in the background [of his own paintings]. Now, any time I put a ship in the background I remember him."
Vernon E. Colemanâ€™s talk about his father was introduced by Michael Giaquinto, the curator of exhibits at the museum. "One of the important factors about Vernon Coleman was that he worked extensively on Cape Cod, was prolific, and he taught," he said in an interview. "Heâ€™s significant on Cape Cod both as an artist and as a teacher. Teaching is a way of giving back."
In an interesting twist, Giaquinto teaches art at Pope John Paul II High School, which is housed in the former Barnstable High School, and which boasts several Vernon H. Coleman murals.

1,874 Followers
Get notifications from your favorite auctioneers.
As Seen On
Shop With Confidence
Since 2002, LiveAuctioneers has made exceptional items available for safe purchase in secure online auctions.
Popular Searches
Artists & Creators
Brands
Style Periods
Origins
Company
Winning
Selling
© 2002-2020 LiveAuctioneers. All Rights Reserved.Cookie PolicyTerms & ConditionsPrivacy Policy
This site is protected by reCAPTCHA and the Google Terms of Service and Privacy Policy apply.
BACK TO TOP