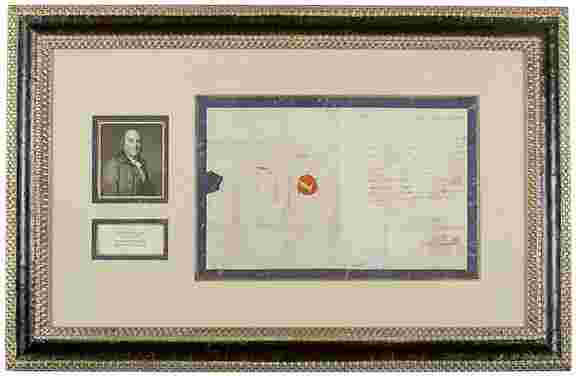 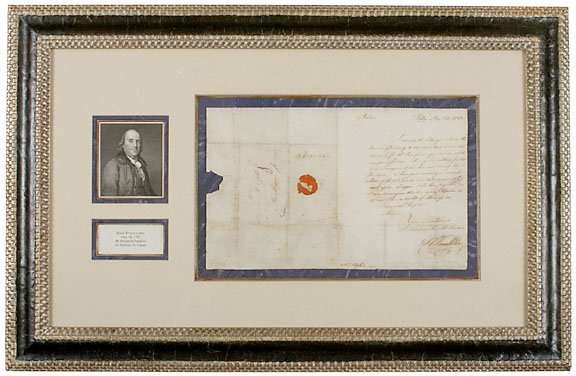 
BENJAMIN FRANKLIN.
Autograph Letter Signed, “B. Franklin” on fine, laid, watermarked paper, 1 page (plus attached address leaf, May 24, 1782, Passy, [France], 9” x 14”, matted and framed along with a portrait engraving to an overall size of 20.75” x 31.5”, Choice Very Fine. A wonderful, personal correspondence between Benjamin Franklin and a colleague, Madame A. Ogle of Boulogne. Franklin acknowledges her recent letter and provides an update about a favor he apparently was trying to do for her. The letter reads:
“Madam, I received the Letter you did me the Honour of writing to me some time since and did apply for the Permission you desired, which was promised me. Having heard nothing farther of it, I imagined it had been sent directly to Boulogne. I have just received your second Letter, of the 21st Instant, and shall immediately apply again. I suppose it has been forgotten, as I cannot imagine that there is any Objection to it, and I have no doubt of obtaining it. I am, with Respect, Madam, Your most obedient and most humble Servant, B. Franklin.”
Letter with normal folds, and brown-inked manuscript which is quite legible and attractive. Franklin’s signature is 2.25” long, with lovely, looping flourishes beneath it. The address leaf has remnants of the original reddish-orange wax seal, and a half-dollar sized absence along the edge where the paper had been sealed by the wax--not affecting any of the manuscript. A terrific example of Franklin’s large signature and personal writing style."

876 Followers
Get notifications from your favorite auctioneers.
As Seen On
Shop With Confidence
Since 2002, LiveAuctioneers has made exceptional items available for safe purchase in secure online auctions.
Popular Searches
Artists & Creators
Brands
Style Periods
Origins
Company
Winning
Selling
Â© 2002-2020 LiveAuctioneers. All Rights Reserved.Cookie PolicyTerms & ConditionsPrivacy Policy
This site is protected by reCAPTCHA and the Google Terms of Service and Privacy Policy apply.
BACK TO TOP