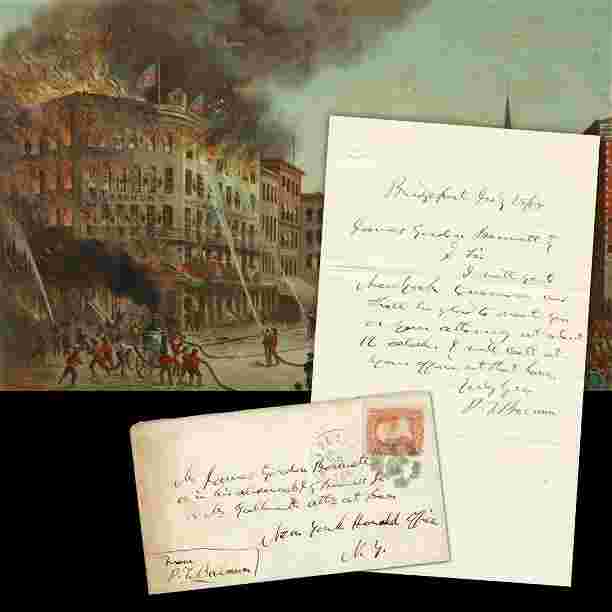 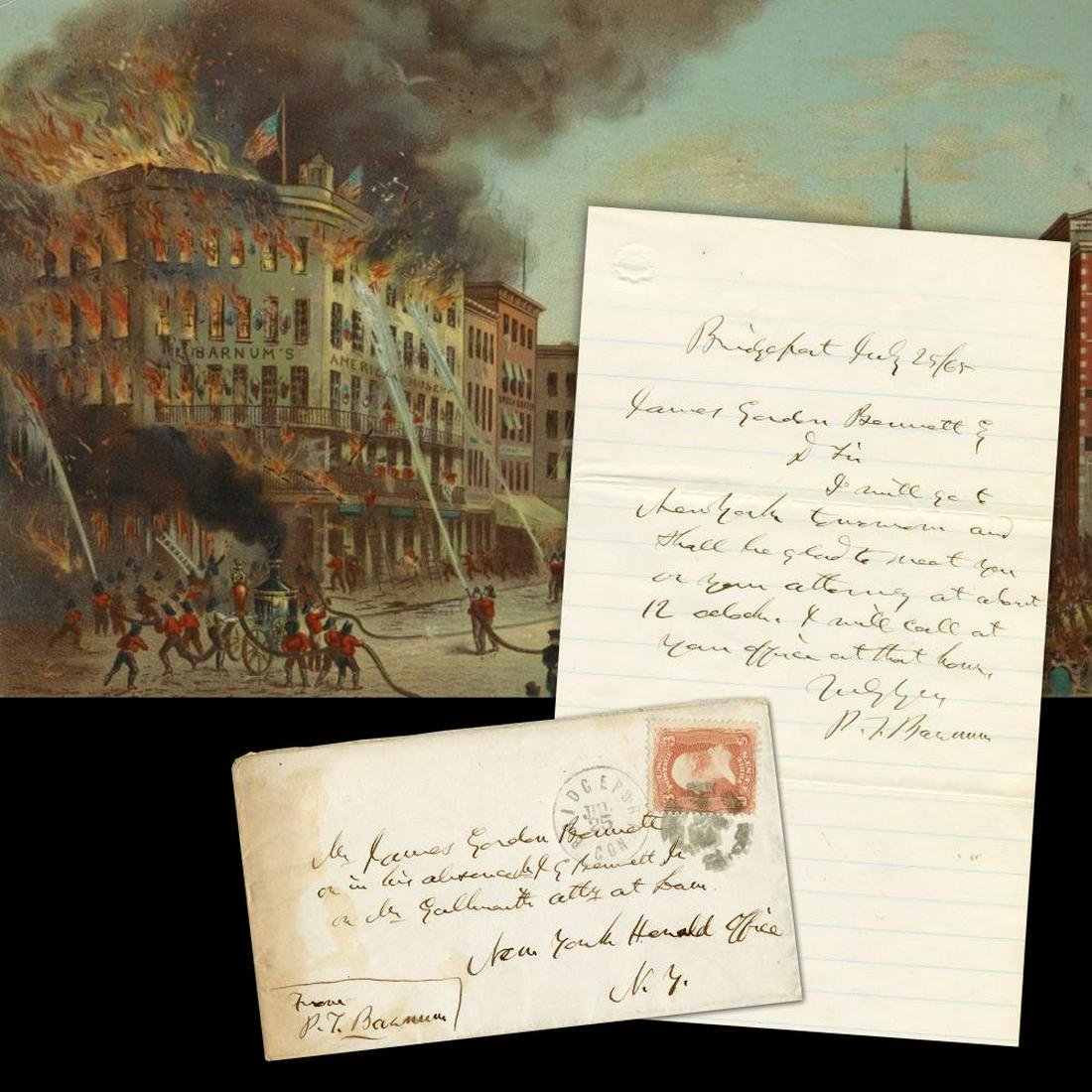 1p ALS inscribed overall and signed by American showman Phineas T. Barnum (1810-1891) as "P.T. Barnum" at lower right. Written in Bridgeport, Connecticut on July 25, 1865. On blue-ruled cream bifold paper, the remaining pages blank. Expected light paper folds, else near fine. 5" x 8". Accompanied by the original transmittal envelope also inscribed in Barnum's hand, and signed by him at lower left as "From P.T. Barnum". The envelope bearing a canceled 3 cent brown George Washington stamp shows some isolated discoloration at left and is letter-opened at top.

The letter reads in full:

I will go to New York tomorrow and shall be glad to meet you or your attorney at about 12 o clock. I will call at your office at that hour.

The envelope is inscribed:

or in his absence Mr J G Bennett Jr

or Mr Galbraith atty at Law

This correspondence relates to three items that would have scorched any New York gossip sheet: Barnum's American Museum fire; a real estate scandal; and the intensifying rivalry between P.T. Barnum and his correspondent, James Gordon Bennett, Sr. (1795-1872), founder of the New York Herald.

Barnum's American Museum had been a cultural fixture in Lower Manhattan since its opening in 1841. The five-story building at Broadway and Ann Streets provided every imaginable entertainment: natural history specimens, wax figures, new inventions, relics, demonstrations, little people, fat ladies, and a large array of exotic animals that included a polar bear, anaconda, lion, tiger, alligators, monkeys, tropical birds, and two Beluga whales. On July 13, 1865, in one of New York City's most horrific urban fires, the structure burned down. The released animals fought each other, jumped out of the building, were burned or boiled alive, or were killed by police and firefighters as they attempted to escape the burning building. In addition to the staggering loss of animal life, it was also a financial disaster: Barnum's estimated investment in the museum was $400,000, while the insurance coverage was capped at $40,000.

In his biography, Life of P.T. Barnum: Written by Himself (Buffalo: Courier Company, 1888), Barnum relates how he was soon approached by James Gordon Bennett. Bennett offered to buy Barnum's still-smoking property to turn it into new newspaper offices. The newspaper publisher agreed to purchase the two lots, measuring 56' x 100' overall, for $200,000. Yet when Bennett discovered that there was a preexisting lien on the property, he balked. He tried getting his money back, but Barnum refused. In retaliation, Bennett deliberately left Barnum's ads out of the Herald.

Barnum and Bennett had never had the best relationship. In 1836, Bennett had been manipulated by Barnum into reporting a news story about Joice Heth, a recently deceased black woman who claimed--at 161 years old--to have been George Washington's wet nurse. Bennett had taken every opportunity of criticizing Barnum in the Herald once it was revealed that Heth was just a normal 80-year-old. Though Barnum presents himself as completely innocent in his biography, he almost certainly was involved in some dubious way with the real estate deal. Yet he writes pacifically in Life of P.T. Barnum: "…I always found Bennett's abuse far more remunerative than his praise…Bennett had tried abusing me, off and on, for twenty years…but I always managed to be the gainer by his course" (Chapter XLI: Bennett and the Herald, p. 254).

James Gordon Bennett had established the New York Herald in 1835, around the same time that Barnum was perfecting the variety troupe that would become Barnum's American Museum. Bennett revolutionized journalism; his reporters conducted interviews about sensationalist stories that were accompanied by graphic illustrations. Son James Gordon Bennett, Jr. operated the newspaper less successfully after 1866.

1,662 Followers
Get notifications from your favorite auctioneers.
As Seen On
Shop With Confidence
Since 2002, LiveAuctioneers has made exceptional items available for safe purchase in secure online auctions.
Popular Searches
Artists & Creators
Brands
Style Periods
Origins
Company
Winning
Selling
Â© 2002-2020 LiveAuctioneers. All Rights Reserved.Cookie PolicyTerms & ConditionsPrivacy Policy
This site is protected by reCAPTCHA and the Google Terms of Service and Privacy Policy apply.
BACK TO TOP